NEW DELHI, Oct 31 (Reuters) - It's a memory that will haunt Ravel Kaur for the rest of her life.

A day after Indian prime minister Indira Gandhi was killed by her Sikh bodyguards 20 years ago, an angry mob invaded Kaur's New Delhi home, dragged out her husband and two sons by their hair, set them on fire and then bludgeoned them to death.

"I just managed to save my 10-year-old son by removing his turban, braiding his hair and making him wear a girl's dress," Kaur sobbed in her ramshackle glass shop, surrounded by pictures of Hindu gods and Guru Nanak, the founder of her religion. 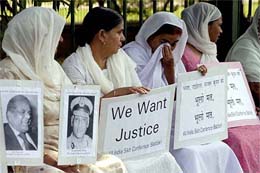 - Women members of the All-India Sikh Conference hold a demonstration in New Delhi on Sunday demanding justice for the victims of the anti-Sikh riots of 1984. — PTI photo

New Delhi, October 31
Two decades have passed, but justice seems to elude the victims of the 1984 anti-Sikh riot. They demonstrated in the Capital today, demanding punishment to those involved in the massacre and compensation to the children of those who lost their loved ones.

The president of All-India Sikh Conference Gurcharan Singh Babbar, in a memorandum to the Prime Minister, said, “No action has been taken against those involved in the sacrilege, burning of Sikh religious text books and looting the money from the coffers of gurdwaras in the Capital.”

The protestors, demonstrating near Jantar Mantar in the Capital, raised anti-Congress slogans and sought justice.

They also sought action against the senior officials of Delhi Police who were alleged to be involved in the riots and felicitation for those who fearlessly tried to save the community and the gurdwaras from destruction.

They also demanded compensation for those killed in the riots and job opportunities to the children of those who lost their lives in November 1984. A monthly pension of Rs 5000 for the aged was also sought.

At the Tilak Vihar colony, where the widows of riots were rehabilitated, there was a stunning silence today with children and relatives of the victims remembering and narrating the horrific memories of the mayhem.

According to the government 2733 persons died in the wave of killings aimed at the Sikh community after the then Prime Minister Indira Gandhi was gunned downed by her Sikh security guards seeking revenge for her decision to send the army to flush out Sikh separatists from the Golden Temple.

The Justice Nanavati Commission, which was asked to probe the riot cases afresh, has been given time till December 31 to complete its inquiry.

It has completed the hearing and sought two months extension to finalise its report.[/b]


For riot victims, 20 yrs changed nothing

Three-month-old Balwinder was sleeping in mother Balwant Kaur’s lap when hell broke loose. The main gate of their house in Uttar Pradesh’s Bilaspur district opened to a group of villagers who came with the news which changed their life. Forever.

‘‘Before I could realise what was happening, scores of villagers broke open the door and told us of the riots. My head was reeling. I had no clue what they were talking about. My husband Fauja Singh had left the house around 10 pm for a bus to my sister-in-law’s house in Patiala. Someone said Indira Gandhi had been shot dead. The entire town was on fire. I couldn’t take it. I fainted. For the next three months, I was in the hospital. My heart refused to believe that my husband would not come back. But then 20 years...,’’ her voice trails off.

She is not alone. The scars of the 1984 anti-Sikh riots are still fresh in the minds of hundreds like her who are living under severe hardship in Phase XI here.

Sitting on a charpoy outside her two-room settlement, Manjit Kaur is silent as Newsline takes her back in time. And then speaks up, slowly. ‘‘They killed him when we were trying to jump to the neighbour’s house. I couldn’t do anything. They hit me with a rod. I don’t know anything after that. My three children and I were locked in a room for 11 days by an acquaintance. My wounds became worse. I could see worms coming out. Later, I got to know that his body was cremated after four days. They had burnt down our house. I was alone.’’

Looking vacantly at a group of children playing nearby, she says, ‘‘My youngest son was born after eight and a half months. My husband had come home from the Middle East after six and a half years. We were in Gurgaon then. The Haryana government did nothing for us.’’

Balwant Kaur’s daughter Balwinder, who was three months old then, is to marry tomorrow. ‘‘My husband was a farmer. It was tough to manage six children. People advised me to go to Punjab for a better life. But what has it given us?’’ she asks. Kaur took up odd jobs in factories and saved from her Rs 300 salary for her daughters’ weddings. ‘‘On my last daughter’s wedding, I sought help from the DC. They did nothing. This time she has sanctioned Rs 2,700,’’ she says, adding her daughter was forced to become a public-function singer to make both ends meet. Danga Pidit Welfare Society (Ropar) chief Kashmir Kaur, whose husband suffered a heart attack when he saw the bloodshed says, ‘‘This is Kala Din for us. I have seen 15-day-olds roasted alive in tandoor. We had to take shelter in a camp. They set our house on fire. My husband’s truck was burnt down. We couldn’t even make our son pursue his dream of becoming an athlete. Governments have changed but we remain where we are.’’
You must log in or register to reply here.
Share:
Facebook Twitter Reddit Pinterest Tumblr WhatsApp Email Share Link