Arts/Society Sikh Heritage In The Making: Anandpur Sahib And 500 Years Of The Khalsa Panth

​
The Khalsa Heritage Project at Anandpur Sahib commemorates 500 years of the Sikh history and 300th anniversary of the Khalsa Panth. Megha Mann reports on the world’s foremost, comprehensive Sikh heritage centre that is scheduled to open in November this year​ 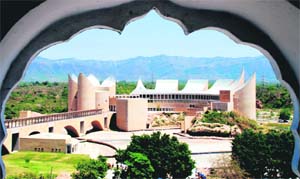 IN the tercentenary year of the Birth of the Khalsa, the Government of Punjab, in April 1999, announced a Khalsa Heritage Complex at Anandpur Sahib to commemorate this epoch-making event.

​
The project, an inspiring tribute to the heroic and poignant saga of the Sikhs and Punjab, stands amidst mountains on a sprawling 100-acre area.

​
Dubbed as a "wonder in the making", the complex has been conceived to project the history and culture of Sikhs on an international scale.

​
The project, which has been shaped like hands offering prayers, unfolds Sikh history and tradition –like never before.

​
People working on the project claim that a museum like this has never been built before in the country. It has got no precedent, no comparison.

​
Made up of building materials from all over India, the project is an architectural miracle and the world’s foremost, comprehensive Sikh heritage centre. 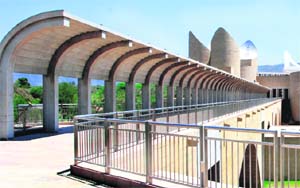 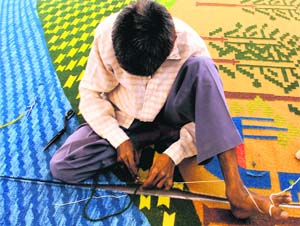 ​
The project houses a museum, which will have souvenirs related to Sikh history comprising all 10 Sikh Gurus, Guru Granth Sahib and Sikh rulers like Maharaja Ranjit Singh. The museum will also have scriptures written by Guru Gobind Singh.

​
The museum is conceived by Amardeep Behl, a Delhi-based designer running AB Design Habit, who is also working on restoration of Sri Harmandar Sahib.

​
The project has two main complexes, which are joined with a connecting ceremonial bridge. The canopy on this bridge is an architectural experiment and is situated in the opposite direction of the sun and does not provide any shade.

​
The western complex houses an auditorium with a seating capacity of 400. It will have temporary exhibition galleries and a library, housing all journals, magazines, books and periodicals on Sikhism.

​
The eastern complex has a north wing also known as flower building. It has another part, which is called boat building or heritage building.

​
The roof of the flower building is shaped in form of five petals – depicting Panj Piaras of Guru Gobind Singh. Each petal will house an exhibit tracing the life history of all gurus from birth to attaining salvation/ martyrdom. These will be permanent exhibits. The petal at the highest altitude will have information and exhibits on Guru Granth Sahib.

​
The rooftops of all petals have been covered with special stainless steel sheets. At night the entire building will be illuminated with its large silhouette being reflected in seven acres around. It will also illuminate the night skyline of the historical city of the birth of the Khalsa.

​
At the entry of the museum, permanent exhibits, depicting Punjab before birth of Guru Nanak, have been placed. These will showcase the climate, culture and life of pre-Nanak times. The ceiling of this heritage building has been made of glass and its floor will be covered with water. The aim of this exhibit is to make the visitor introspect his life.

​
Thematic carpets will adorn walls of this part of building for which weavers from Mirzapur have been roped in. Next the visitor is greeted with the thought-provoking concept of Ek Onkar – this mool mantra will echo all around this exhibit. This exhibit, with special sound effects, is situated in a drum-like building where lights will create an image of Ek Onkar and an audio message will highlight core principles of Sikhism.

​
Then starts a mesmerising journey into the lives of first five Gurus in the five petals of the flower building. These five petals tell tales from Guru Nanak Dev to Guru Arjan Dev.

​
The first petal will have the milieu of the times Guru Nanak Dev was born in, tracing his life with travels (udasi) undertaken. Further there will be galleries depicting achievements of Guru Angad Dev and Guru Amardas. One of the galleries is divided into two, by recreating a baoli in the middle, to highlight gurus contribution. It will have leather and shadow puppets with painted murals in background.

​
The gallery in the fourth petal contains exhibits on the contribution of Guru Ram Das, including the construction of the city of Ramdaspur, adding 11 ragas to existing corpus of Gurbani and the Lavan. The city of Ramdaspur has been recreated in an embroidered creation.

​
The gallery in the fifth petal showcases key events in history of Sikhism: construction of Harmandar Sahib and writing and installation of Adi Granth. A pathway leading to the gallery will have a replica of Harmandar Sahib. The gallery also has an ethereal, glowing representation of Prakash Sthal — the place of the Adi Granth in Harmandar, in the centre. Around this central installation are shown stories related to the establishment of Adi Granth. Four doorways around it recreate different scenes describing the life and times of Guru Arjan Dev.

​
There is another gallery depicting Guru Arjan Dev’s martyrdom in the form of a sculpture on the terrace.

​
Here the events of martyrdom have been narrated in an evocative manner without showcasing ****** and horrendous scenes, usually associated with Sikh museums.

​
There is also an exhibit, which will suggest coming together of five elements — fire, earth, water, air and space.

​
The galleries at the lower level will chronicle the trials, tribulations and triumphs of the Khalsa from Banda Bahadur to immediately after Partition, when Sikh dynamism transformed Punjab with its `E9lan, energy and resilience.

​
The Punjab and Himachal Pradesh Governments have proposed a joint ropeway project from Naina Devi to Anandpur Sahib. Currently, a survey of the area is underway for this project. Besides these attractions, the Bhakhra-Nangal project and the Nangal wetland offer perfect features for developing this area as a tourist hub.

​
But the heritage complex project has been hit hard by the funds crunch, which has delayed its construction. Started by Prakash Singh Badal in 1998, the project ran into rough weather in 2003 with the then chief executive of Anandpur Sahib Foundation (ASF) seeking funds from NRIs for its continuation.

​
A year later, a consortium of five banks agreed to finance the project. The Central Government contributed around Rs 48 crore, while the five banks gave Rs 100 crore. The rest of the amount has been spent by the state government.

​
Modalities are being worked out to recruit staff members for the complex. Work is also on to finalise rare books and manuscripts for the hi-tech library that will be an integral part of complex.

​
The government has a two-pronged plan for hiring employees to run the project. Under the plan, the people working at present on the p