Chandigarh/Patiala, Punjab (February 14, 2012): As per media reports “Black Warrants” for the execusion of Bhai Balwant Singh Rajoana, who has been sentenced death penalty in former Punjab Chief Minister Beant Singh’s assassination case, reached Patiala Central Jail authorities on February 13, 2012 and he will be hanged in Patiala central jail at 9 am on March 31.

It is notable that Balwant Singh Rajoana had confessed his involvement and expressed no faith in Indian judiciary. He refused to defend himself in the court and accepted the sentence. He had accused Indian courts for applying dual standards of law and accused Indian system for shielding culprits of Sikh genocide 1984.

As per media reports in the state of Punjab this is going to be the first execution during the last 24 years. Chandigarh additional sessions judge Shalini Nagpal has issued the orders implementation of the death warrants. It must be mentioned that Rajoana did not challenge his conviction.

Balwant Singh is a native of village Rajoana Kalan, Raikot (Ludhiana). He had already announced to donate his eyes and other body parts after his death. In his will, he had expressed desire that his eyes should be transplanted to Hazoori Ragi of Darbar Sahib, visually impaired Bhai Lakhwinder Singh.

He will be the first person to be hanged to death after Dhananjoy Chatterjee of Kolkata in August 2004 who was sentenced to death pertaining to case of raping and murdering Hetal Parekh in her house in Bhowanipore on March 5, 1990.

Deputy superintendent, Patiala jail, Rajan Kapoor said he has information about the execution orders but did not divulge details in reagrd to the preparations in jail for Rajoana’s hanging. especially owing to the fact that Punjab has no hangman currently in the state. The jail officials have taken up this issue with higher authorities.

Advocate Navkiran Singh informed during a radio talk show on “Punjabi Radio USA” that death warrants issued by a court could only be interfered by a court.

another nail in the coffin....or as in punjabi proverb..another stone in the boat...
M

Does anyone know if there is any petition going on to stop his death sentence?

Manni Singh 85 said:
Does anyone know if there is any petition going on to stop his death sentence?
Click to expand...

There is in the UK. How much does everyone know of this in Canada? How do the Sikhs feel about this there? The Sikh world needs to get together and show the World how inhuman India is and the sacrifices made by Sikhs to make Indian what it is now.

BaljinderS said:
There is in the UK. How much does everyone know of this in Canada? How do the Sikhs feel about this there? The Sikh world needs to get together and show the World how inhuman India is and the sacrifices made by Sikhs to make Indian what it is now.
Click to expand...

BaljinderS ji the issues are unfortunately in people so called calling them Sikhs.

Reading the following if you have not already.

Now let us look at the sister thread on the subject where Balwant Singh refused to meet with the following, 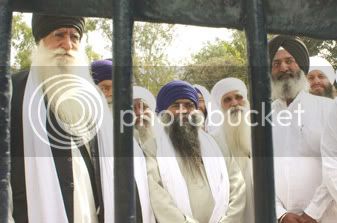 How many eyes of sincerity you spot? I have difficulty seeing too many if any!

What could be the reason? It is insulting, degrading and utterly shameful for people like above to show up. Everybody believes their picture on TV will translate into that they have done all they could. How disgusting can that be? These people, the SGPC and all civil libertarians have the capability to canvass millions to come to see Balwant Singh. Appearing like a group with no follow through defines what Balwant Singh saw in these people? Just eunuchs and lip service with no heart in the issue. If I was him, I would do the same.

People need to rise and recognize the enemies, traitors and ineffective people with Sikh persona determined to destroy Sikhism knowingly or unknowingly.

Hanji veer ji, I was thinking the same. Just look at the eye's of the pakhandies in the photo. The eye's tell you a lot!! They remind of pigs who live in rubbish, eat rubbish and talk rubbish.
I feel that Balwant Singh is my brother. I feel hurt but that feeling is overrun by how proud I feel as Sikh that we have such a courageous warrior who is making the ultimate sacrifice.

I will make sure that my children know about warriors like this.
M

Everyone in Canada very well know about this but only few guys in each city are getting together and approaching high authorities to talk to Indian government. Rest of the People are just ignoring and saying that he wants shaheedi, so let it happen. I don't know what has happened to the people here. Waheguru mehar kare.

BaljinderS said:
There is in the UK. How much does everyone know of this in Canada? How do the Sikhs feel about this there? The Sikh world needs to get together and show the World how inhuman India is and the sacrifices made by Sikhs to make Indian what it is now.
Click to expand...

Unfortunately not much is being done here in Vancouver. I'm not sure why sometimes since majority of punjabis here are still 1st generation and behind a few gaps compared to UK.
Even on the radio, there is only mention but no action being put forward. I think the problem is there are plenty of different radio stations and tv channels but there is not any strong central mainstream media such as the sikh channel in UK. It's a very good resource you have in UK, and we could do with something similar.
The community in Surrey is vast with the gurdwaras being a big part of life for most. With regards to petitions for other issues and beings, the sikh community never have any problems in getting support across the board. Bigwigs such as the mayor, ministers etc... never ignore any issue put forward by sikhs, they always seem more supportive than the MP's etc.. back in UK.
The human rights coalition is very strong here in BC providing plenty of support, they have control in dictating many of the rights and laws.
However, when it comes to international issues, Canada seems to sit back and watch USA, they are very cautious and have thus survived the recession by using this approach.
I think there should be more awareness that should come from a central source, this way it could reach all at the right times.

I think the sikh world is getting together on this there are protests in Italy, Uk, Germany, Pakistan, and India.

Why don't the Indian government give our own homeland and leave us alone???
O

there is some good links (videos) on this page for more info about the protests.

OneD10s said:
I think the sikh world is getting together on this there are protests in Italy, Uk, Germany, Pakistan, and India.

Why don't the Indian government give our own homeland and leave us alone???
Click to expand...

Hanji veer ji, Finally the Sikhs are protesting from all around the World. Waheguru mehar kare.

There are Nine Visible Input or Output Visible Doors through which body interacts with creation.
2 Eyes 2 Nostrils 2 Ears 1 Mouth 2 for Excretion
Total of Nine visible...