How Sikhs Made Me Who I Am: Part 1 | Sikh Philosophy Network
Menu
Log in
Register

How Sikhs Made Me Who I Am: Part 1

This post is part one of a 2-part series of my reflection on Sikhism in the wake of the August 5th, 2012 shooting in Wisconsin. I intended to only write one article (on the topic of part 2), but as I wrote, this is what came.

After the tragic shooting at a gurudwara in Wisconsin on August 5th, leaving six innocent people dead, there has been no shortage of response. The bloggers have been tough to keep up with, writing on the tenets of Sikhism and the bigger questions of these trends of violence plaguing our country.

As I began to think, I was reminded of a visit to Balbir Singh Sodhi’s gurudwara in Phoenix, the place of worship of the first victims of post 9/11 anti-Sikh violence. It was to my pleasure that writers already raised the topic that we should not jump to differentiate Muslims and Sikhs, which would wrongfully imply Muslims should be the target. Thankfully, others already wrote on it as early as the day following the shooting.

What can I add to the discussion on Sikhism after this tragedy? Honestly, educating the American public on why Sikhs wear turbans and have beards doesn’t interest me. Indeed, the emphasis on educating the American public on Islamic beliefs and practices has done little to prevent anti-Muslim sentiment. When the discourse turned sour two years ago surrounding the Park 51 Islamic center, many began to question the effectiveness of education. Will knowing more really help? Knowledge rarely leads to behavior change in anyone, let alone bigots. 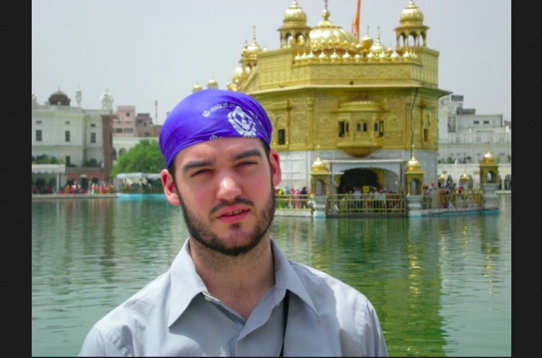 Discussing Sikh theology and practice could be a great discussion for a community dialogue, but will do little to prevent domestic terrorism and religious prejudice. What we’ve learned from anti-Muslim sentiment is simple; friendships are the best way to combat fear and hatred. What I recalled in the days following the shooting, and in thinking about this blog post, were the places Sikhs have touched my life and made me who I am through their friendship; unbeknownst to me, quite significantly.

I am taken back to my high school days, sitting at Little India restaurant in my home town of Saratoga Springs. My mother and I went out for an experimental meal, trying Indian food for the first time. I wish I could remember what I ordered, but assume it was chicken tikka masala; a common dish for people who know nothing of Indian food, probably because they think it is the Indian version of chicken marsala. This moment shaped not only my undying love for Punjabi food, but was the time I would meet my first Indian “Auntie,” a tall woman whose family I would come to meet and become very close with in the years that followed.

I inquired about a job, and soon after began working at this restaurant. I was subliminally indoctrinated into a love for Indian culture, classical music, and Sikh shabad kirtans. The uber-high pitched voices of women film singers became the soundtrack for my work. I stayed there for over 2 years, spending one of my summer vacations working seven long days a week, but enjoying every crazy hour delivering hot naan and explaining the differences between mango lassi and a mango shake to first timers.

It was the summer I saw my first Bollywood movie, learned my first Punjabi phrase, “ki haal aa?” and was jokingly threatened with “Oye thappad hi marunga!” It was truly my own “little India,” and gave me a taste of immersion in a culture I knew very little about, but would become enthralled with. Riding my bike home night after night, white shirt stained red with drops of masala sauce and smelling of curry and sweat, I was in the midst of a transformation realizing there was intelligent life outside of Saratoga. Who woulda thought?

Their family welcomed me as an official associate. Not only did they offer me my first inter-cultural experience, but my first inter-religious one. I visited a gurudwara in upstate New York with them, my first time entering a non-Christian place of worship. Only now do I realize the impact that this experience must’ve had on me and my spiritual escapades of the years to come. It was the first prostration of my life, and though the gurudwara was just a converted suburban home (much like many mosques), it was authentic and faithful. I sat with my Auntie Gurdev, realizing after a few minutes that I was the only male on the right side of the room.

Little did we know, as my mother and I sat at that table one afternoon in February in 2002, that after a few short years I would be moving to India for a degree in sitar. Who would’ve thought that after that first awkward experience sitting on the women’s side of the gurudwara that I would be visiting the Golden Temple in Amritsar? And little did I know, until just now typing this post, that a Sikh family helped to make me who I’ve become, a gift that I could never trade.

How Sikhs Made Me Who I Am: Part 1