Health And Aging : Nuts Are A Nutritional Powerhouse

Sadly, for more than half my life, I had avoided some of nature’s most perfect and healthful foods: nuts and peanuts. I had been mistakenly told as a teenager that nuts were fattening and constipating, effects I certainly wanted to avoid. 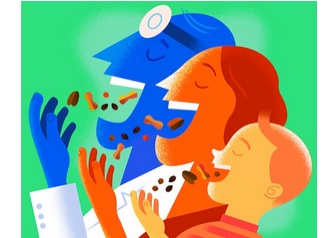 But based on what I have learned to the contrary from recent studies, I now enjoy them daily as nuts or nut butters in my breakfasts, salads, sandwiches and snacks. A baggie of lightly salted peanuts accompanies me on excursions everywhere; I even keep a jar of peanuts in my car.

A series of large studies, including the Nurses’ Health Study of 76,464 women and the Health Professionals Follow-Up Study of 42,498 men, found that the more nuts people consumed, the less likely they were to die at any given age, especially of cancer or heart disease. And a clinical trial conducted in Spain showed that death rates were lower among those consuming a Mediterranean diet supplemented with extra nuts.

However, these studies were conducted almost entirely among relatively well-to-do, well educated, white individuals, and despite the researchers’ care in controlling for other factors that could have influenced the results, there remained the possibility that characteristics of the participants other than nut consumption could account for their reduced death rates.

Now, strong links between nuts and peanuts and better health have also been found in a major study of people from lower socioeconomic backgrounds and varied ethnic groups — blacks, whites and Asians — many of whom had serious risk factors for premature death, like smoking, obesity, high blood pressure and diabetes.

The results were published in March in JAMA Internal Medicine by researchers at Vanderbilt University School of Medicine. Their study, conducted among more than 200,000 men and women in the Southern United States and Shanghai, found that the more nuts people consumed, the lower their death rates from all causes and especially from heart disease and stroke.

And while it is true that more people today are allergic to nuts, and to peanuts in particular, than ever before, two recent studies have pointed to ways that may prevent children from developing a nut allergy. The first study, published last year in JAMA Pediatrics, found that women who consumed the most nuts or peanuts during their pregnancies were least likely to have children with this allergy. The reduction in risk was highest among children whose mothers ate nuts five or more times a month.

The second study, published in February in The New England Journal of Medicine, found that introducing peanuts into the diets of infants 4 to 11 months old who were considered at high risk of developing a peanut allergy actually greatly reduced their risk of being allergic at age 5. The researchers, from King’s College London, suggested that the common practice of withholding peanuts from babies may in fact account for the recent rise in peanut allergies.

Guidelines issued in 2000 by the American Academy of Pediatrics recommended withholding peanuts from children at risk of developing allergies until they were 3. The academy has since revised its position, suggesting that evidence that avoiding specific foods beyond 4 to 6 months of age prevented food allergies was lacking. Now a further revision by the academy may be in order, though to prevent choking, babies should not be given whole nuts — only ground nuts or nut butters.

Before returning to the relationship between nuts and better health, I want to reassure weight-conscious readers that, when consumed in reasonable quantities, nuts are not fattening and can even help people lose weight and maintain the loss.

Yes, relatively speaking, nuts are high in fat, and fat contains more calories per gram (nine) than protein or sugar (four calories), even more than alcohol (seven calories). But a review of studies of large populations here and abroad by Richard D. Mattes of Purdue University and co-authors most often found that adults who eat nuts weigh less than nut avoiders. And children who ate peanuts usually had a lower body mass index than those who did not.

Clinical trials found that adding lots of nuts to one’s diet had a limited effect on body weight. But more important, participants in studies that included nuts in a weight-loss regimen lost more weight and ended up with a smaller waist and less body fat than participants who did not eat nuts.

One explanation for the weight control benefit of nuts is the satiation provided by their high fat and protein content, which can reduce snacking on sweets and other carbohydrates. Another is that all the calories in nuts, especially whole nuts, may not be absorbed because they resist breakdown by body enzymes.

Finally, in a 2013 study in The British Journal of Nutrition, Dr. Mattes and colleagues reported that consuming peanut butter or peanuts for breakfast helps to control hunger, stabilizing blood sugar and reducing the desire to eat for up to 8 to 12 hours. (My favorite breakfast: half a banana, sliced, with each slice topped by a half-teaspoon of crunchy peanut butter.)

As for their cardiovascular benefits, nuts are rich sources of monounsaturated and polyunsaturated fats, which prompted a health claim by the Food and Drug Administration that “Scientific evidence suggests but does not prove that eating 1.5 ounces per day of most nuts as part of a diet low in saturated fat and cholesterol may reduce the risk of heart disease.” Two exceptions are macadamia nuts and cashews, which have too much saturated fat to qualify for this claim.

Nuts are also rich sources of dietary fiber, and almonds, Brazil nuts, peanuts and walnuts may actually help prevent constipation, countering my long-held concerns about their effects on digestion. Other beneficial substances in nuts include vitamins, antioxidants and other phytochemicals. All of which adds up to nuts as a nutritional powerhouse.