Children who watch parents drink 'are twice as likely to binge on alcohol'
Young people also more likely to drink if parents leave them unsupervised, according to Joseph Rowntree survey

It is known that alcohol and tobacco in the forms we consume them in are more dangerous than marijuana and other drugs. Yet marijuana is illegal, while the other two and found everywhere.

Why not make alcohol illegal if the goal is to reduce consumption and prevent children from getting their hands on it?

Also, people have always used and further abused drugs. The abuse becomes more likely when drugs are purified. Coca leaves when chewed make the body more energetic yet after purification to cocaine, the drug induces a quick high and the person becomes addicted.

Why not have drugs available in their raw form for consumption?

Why not make alcohol illegal if the goal is to reduce consumption and prevent children from getting their hands on it?
Click to expand...

During the American prohibition era (when alcohol was made illeagal) there was much more death attributed to binge drinking then there is now. Similarily, in amsterdam, legalizing maryjauna has resulted in a decrease of pot smokers.

I wouldnt make alcohol illeagal unless you really want kids to start binge drinking. The whole "illeagalness" of it makes it more cool among other things. If it is harder to find then that also promotes binge drinking because you dont know when ur going to get some next. Legalizing alcohol helped if anything—they should legalize maryjauna under the same logic (even if it was as deadly as alcohol and tobacco, which it clearly isnt).

Why not have drugs available in their raw form for consumption?
Click to expand...

Why not have both? As long as their safe ...
LSD is manufactured from a yeast but even in its most chemically pure form it is safer then caffeine. Far more powerful as well

So I would legalise chemically pure lsd but put a cap on cocaine, crack, meth, etc. One problem could be that if all the raw materials are readily available—this might result in some people extracting more and more potent/pure forms of the active ingredients. 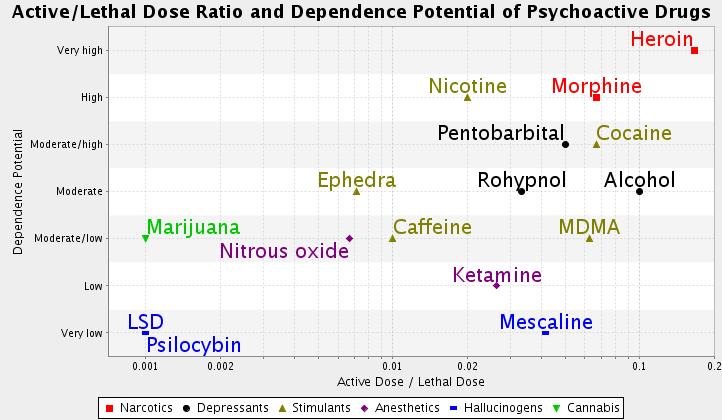