When I received the newly published book my first reaction was, oh’ another book on a subject which so many have already written about. Earlier, even I had written a lengthy treatise on the subject. Therefore, who wants to read on this subject again? 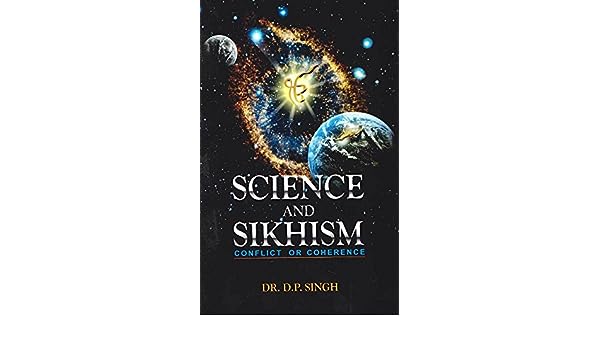 I found the book very different than other books with similar titles that I had read before.

As a matter of fact, I find the book title deceptive in that the book does not go into a justification of science and religion existing side by side, as most books do. Instead, the new book visions the Divine, the Creation, the religion, and its practices today through the eye of a scientist.

When Guru Nanak came out of his long trance at the banks of Vein rivulet in Northern India, he told those waiting for his return from his trance that he had a unique type of vision. That vision inspired him further to share with the world the wisdom he received during his trance. Also, he revealed a new symbol to represent his Divine. This symbol we now know as Ek Onkar, simply translated – One virtual reality manifested in all creations. Guru Nanak further prophesized that humanity would achieve the purpose of their living on this earth through an uninterrupted relationship with this virtual reality through observing, connecting, and relating to the reality all around.

The relationship of the human intellect with that Virtual Reality may be achieved by a vast variety of tools, and science is one such tool. And that is the path the author takes in this new book. He defines a Sikh, Gurmat or the religion of the Sikhs, through the eyes of a scientist.

Since the Sikhs are those who seek the required wisdom through the hymns embodied in the Guru Granth, the author so defined Sikhs as all those seeking the ultimate and the awesome wisdom. When one goes further into it, one finds that there are diverse ways that lead to the same goal including the pathways of the same inquiry the scientist takes. The organizational part of the Sikhs is only formulating the path that is fitting within a culture, and science is the one discipline of that culture. Such an approach may be described with a beautiful parable – “We cannot stop the winds, but we can adjust our wings if we are so taught.” Yes, the Guru Granth prepares us to respect all adjustments that civil societies apply to their wings. The discipline of science teaches one such change, and the current book illustrates it amply.

Thus, even when Sikhism may be known as an organized religion, it does not require that one adheres to the organizational walls. That is how we remember Guru Nanak as Jagat Guru, meaning the one to shine over the whole world and not limited to any culturally or geographically defined community.

In this short review, I will not go into the definitions and formats of “Wisdom.” Human history is replete with examples how people in various cultural and various national boundaries successfully conceptualized and defined wisdom. It is perhaps this aspect that led the author to dedicate the book to “Inquisitive Human Mind.”

The real subject of this book is how the authors of the Guru Granth imparted the wisdom to its adherents; who become the Sikhs, meaning the seekers of the wisdom embedded in the verses of the Guru Granth. Among them are scientists. The author who himself spent his life as a professional scientist made it more accessible in the lingua-franca of a scientist to seek the Wisdom of the Guru Granth. In the new book, it is through the eye of a scientist that one looks at the Sikh theology. Such an approach though vital in the digital age has been neglected among the Sikh masses and even in Sikh scholars. The author very wisely undertook to make up for this weakness in our community.

To judge the extent of the new book, it may be best to list all the Sections that comprised the book. This way you may get a bird’s eye view of the book.

The book is organized into many sections and subsections.

Next Section on Sunn (Primal Void): Nothing or Everything? is sub-sectioned into The Void, Sunn: The Primal Void, Sunn and Creation, Sunn and the Modern Physics, Sunn: Creator and the Annihilator, and, Sunn Samadhi: The Way to Perceive Ultimate Reality.

The Section on Kudrat (Nature) in Guru Nanak’s Holistic Vision is sub-sectioned into – Nature, – Primal Cause, – Time of Creation, – Vastness, – Diversity of Life. – Working of Nature, – Wonders of Nature. Nature and Divinity, – Nature and Spirituality, and – Nature and Humanity.

The Section on Relevance of Guru Granth Sahib in Twenty-First Century is divided into – Environmental Concerns – Menace of Corruption – Drug Abuse and Aids – War, Terrorism, and World Peace

There needs no convincing on the width and breadth of coverage attempted in the book. At the same time, the author does not subject the reader with a bombastic style. He writes in simple English but sticks closely to the evidence with full citations and references.

The book is recommended to both the public and the scholars. It will be particularly useful to Sikhs katha-kars (preachers) undertaking Gurbani exegesis in English, or the Sikh millennials organizing discussion groups using English as their medium of discussion. The book dwells on many metaphors often used in Guru’s hymns.

This is a big plus.