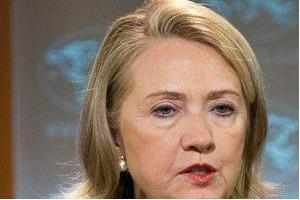 WASHINGTON: The US state department has highlighted "widespread corruption at all levels of government" and separatist, insurgent and societal violence among the most significant human rights problems in India.

"Widespread impunity at all levels of government remained a serious problem," said the department's annual report on human rights released by Secretary of State Hillary Clinton on Thursday.

"Investigations into individual cases and legal punishment for perpetrators occurred, but in many cases a lack of accountability due to weak law enforcement, a lack of trained police, and an overburdened court system created an atmosphere of impunity," the report noted.

Other highlighted problems included police and security force abuses, including extrajudicial killings, torture and rape. Also listed were disappearances, life-threatening prison conditions, arbitrary arrest and detention and lengthy pre-trial detention. "The judiciary was overburdened, and court backlogs led to lengthy delays or the denial of justice," the report said.

Who is Us? What are its credentials? What is its contribution to enrich the poor and developing nations/countries? I think one would get a suitable answer if one ponders over few facts.

It produces 12 billion bullets per year enough to kill the entire humanity twice.US is the largest exporter of arms to Asia and has indirectly fuelled terrorism [along with China] in south east Asia. It accounts for over 30 percent of world arm’s sale.
Its defence budget itself is about 43 percent of the total defence budget of first 10 countries.

It is the only foolish country to have used Atomic Bomb. It has carried over sense less war in Vietnam for over decades with no end result. With many other statistics to corroborate its selfishness, US have no moral right to comment upon any other country’s internal affairs.

What do we choose to do instead?

1. We choose to spend our money on, and use our technology for, a myriad of frivolous, often environmentally destructive consumer goods and services: massive SUV's, giant screen TV's, countless changes of clothes with every passing fashion, cosmetic surgery, and so on ad infinitum: an endless mélange of gadgets, widgets, and other doodads that no one ever thought they needed until advertising convinced them that they did.

2. Americans even complain of feeling put upon. Their taxes are too high. They can't buy a new car often enough. They don't have enough leisure time.

You don't seem to disagree with any of the points made in the report. I think it's about time the U.S. said something about human rights violation of "the largest democracy in the world". They have turned a blind eye for far too long. You forget to mention about the amount of financial aid the U.S. spends every year.
By they way I don't really disagree with what you had to say but this should be said for the sake of fairness.