French Bank Apologises For Refusing Entry To Turbaned Sikh
“I’m sorry... Also, please kindly accept my apology on behalf of the bank for the unpleasant feelings which could have been felt on that occasion.....the manifestly excessive and improper application of security instructions led to a situation I strongly regret.”: Valerie Manscour, BNP Head of Customer Relations.


​
Paris, France - A major French bank in Paris, which last month refused entry to a young Sikh customer because he wore a turban, has apologised for its “manifestly excessive and improper security instructions.”

Ranjit Singh, 22, a business entrepreneur and a Sikh customer of the BNP Paribas Bank, arrived on 8th October 2009 at the BNP branch at 168, rue de Belleville, 75019 Paris to carry out a routine inquiry of his bank account. However, he was stopped at the security door by an employee of the bank who gestured to him to remove his turban to enter the bank. Ranjit Singh explained to the employee that the turban is worn as an act of faith and that he wears it all the time. Despite his explanations, the employee called another colleague who repeated the same demand. Still blocked at the security door, Ranjit Singh repeated that he is a client and that he simply wishes to verify his account. After about twenty minutes, without success, Ranjit Singh left feeling humiliated and threatened by the bank’s discriminatory attitude. 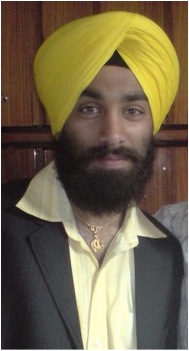 “Ranjit Singh contacted the UNITED SIKHS and we wrote to BNP Paribas to ask for an explanation for their discriminatory conduct of refusing entry to a turbaned Sikh,” said Shingara Singh, UNITED SIKHS Director in France.

We pointed out to them that, in 2005, HALDE, the Independent High Commission for Equality and Against Discrimination, had held, in a case involving Raghbir Singh, that the Banque de France had unlawfully discriminated against him when they refused him entry for wearing a turban.
The HALDE had held: “In this case refusing the benefit of a legally-granted right on the grounds of physical appearance or affiliation or non affiliation, actual or assumed with a ethnic group, nation, “race” or specific religion, is a discrimination.” The HALDE had also recognized that the refusal of entry was disproportionate because the Sikh turban does not hinder identification.

Valerie Manscour, BNP Head of Customer Relations, wrote to UNITED SIKHS on 22nd October 2009 and said, “I’m sorry about the events that you describe. Also, please kindly accept my apology on behalf of the bank for the unpleasant feelings which could have been felt on that occasion.” She also indicated that “the manifestly excessive and improper application of security instructions led to a situation I strongly regret.” The letter may be read here. You can also read the letter in French here.

UNITED SIKHS will be writing to the BNP bank to ensure that it changes its policy, procedure and practice so that it expressly requires its security staff to allow entry to a turbaned Sikh. We will also offer to provide sensitivity training to the bank’s staff so that they are more aware of the Sikh community and its identity.

Ranjit Singh commented on the experience: "Being born and raised in France I did not understand why they treated me in this way. I never thought I would be discriminated because of my religion. This incident will always be on my mind every time I enter a public building. I continue to feel both angry and sad that I was humiliated in public.”

The dastaar (Sikh turban) is the most recognizable feature of a Sikh. It is an inextricable part of the Sikh identity and is worn by a Sikh at all times, to cover the kesh (unshorn hair), one of the five articles of faith that initiated Sikhs are required to maintain. The requirement of unshorn hair and a dastaar tied over it has been codified in the Sikh Code of Conduct (Sikh Rehat Maryada).

To read a previous press release on UNITED SIKHS advocacy efforts for the right to wear a turban, please visitUNITED SIKHS Press Release 1512200800