This short research paper discusses how the logo, ੴ , designed by Guru Nanak was mispronounced as ਏਕੁ ਓਅੰਕਾਰੁ (Ek Oankaar) and now some of the writers are refusing this pronunciation and trying to find the real one. The Khanda, ☬, was not designed by any Guru. It appeared around the 19th century and now Khanda, ☬, is being steadily converted into Trishul of Shiva.

INTRODUCTION
The ੴ is a logo, designed by Guru Nanak to represent the Eternal Entity (commonly called God) in Sikhi (philosophy) founded by him. It appears at the top of the ਅਰੰਭਿਕ ਵਾਕ (arambic vaak) termed as ‘Commencing Verse’ as shown in the Adi Granth of Kartarpuri Bir in Fig. 1. 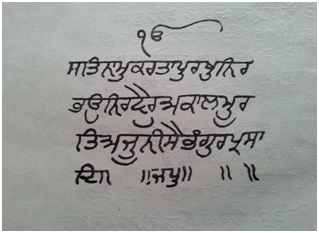 But the Commencing Verse which appears in the AGGS printed by the Shiromani Gurdwara Parbandhak Committee, (SGPC), Amritsar joins with its attributes shown as follows:[1]

DISCUSSION
Is ੴ a ‘Logo’?
Many Sikh scientists, theologians, and the Sikhs at large feel it is disgrace to call ੴ a logo being unaware that every company and religion have their own logo.

Logo is defined as:
Also called logotype. A graphic representation or symbol of a company name, trademark, abbreviation, etc., often uniquely designed for ready recognition.
(Dictionary.com)
Examples of some Logos:
1. Northwest Airline: This logo reflects a clever way of presenting the ‘Northwest’. North is represented by letter “N” and West with an “arrow” pointing towards West in the upper left corner. [2] 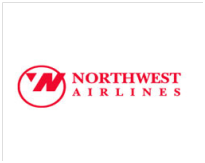 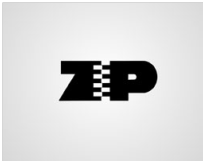 Some logos of different religions are depicted in Fig. 2. 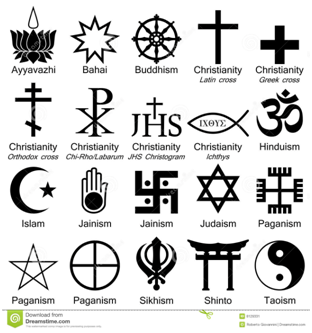 It is very strange that none of the religions is showing any weapon in their logo whereas the Sikhs are showing Khanda, ☬, with all types of weapons. This logo, ☬, was not created by Guru Nanak or any other Sikh Guru not even by Guru Gobind Singh. Most probably it was designed during the British Rule in India when the Sikhs formed a major portion of the army. Now this Khanda, ☬, is being steadily converted to Trishul of Shiva as follows:

The commonly used Khanda has been misconstrued to look like Trishul – the first stage in making it a complete Trishul of Lord Shiva:

The first picture is of a Khanda, which is usually in and around almost all Gurdwaras and also on the turbans of Sikhs and letterheads of Sikh organizations.

The second picture is of a misconstrued Khanda showing a crescent, a double-edged Khanda in the center, and two pointers downward at the bottom of the crescent.
(Credit to this picture: http.www.sikhmuseum.comnishanmistakencrescent.html#shiva9)
This appears to be the first stage to change original Khanda into a complete Trishul of Lord Shiva as shown in the third picture. Now this misconstrued Khanda that looks like Trishul is adorned on the turbans of not only Nihang Singhs but of many other Sants/Babas, the Sikhs, young and old.

This khanda appeared out of the blue during the 19th century and now during 20th century is being misconstrued systematically into the first stage of Trishul of Shiva.

Who is doing so?
I have been unable to discover.

HOW IS THIS LOGO MISUNDERSTOOD?

ੴ - wherever I have heard, has always been pronounced as ਇੱਕ ਓਅੰਕਾਰ (Ikk Oankaar) and in English, spelt as Ikk Oangkar. It was during a TV show that I saw it being spelt as Ikk Omkar. It appeared as if someone was trying to give Sikhi a Vedic twist. This raised two questions in my mind pertaining to ੴ. First, what was the correct pronunciation; and second what was the message behind this Symbol / word, ੴ as intended by Guru Nanak.

In the meantime, I came across an article by Professor Dr. Devinder Singh Chahal of the Institute of Understanding Sikhi, Montreal in Canada who asserted that its pronunciation was ਇੱਕ ਓਹ ਬੇਅੰਤ Ikk Oh Beant (The Infinite One).[7] I subsequently heard a presentation from S. Gurbans Singh of Ludhiana, Punjab, where he asserted that the proper pronunciation of ੴ was ਏਕੰਕਾਰ (Ekenkaar), as per Gurbani enshrined in the Guru Granth Sahib. S. Manmohan Singh Scout of Mohali, Punjab also subscribes to the view that ਏਕੰਕਾਰ (Ekenkaar) was indeed the proper pronunciation for ੴ.

It also appears that Bhai Gurdas was the first who declared the Commencing Verse as Mool Mantra and as ਏਕੁ ਓਅੰਕਾਰੁ (Ek Oankaar) which leads the Sikhs to Vedas and Vedanta philosophies since Mantra system is from Vedas and Oankar/Aumkar/Omkar represents Aum/Om which further represents Trinity of God. On the other hand, neither the Mantra system nor the Trinity of God is accepted by Guru Nanak.

Basi Ji is also unaware that S Nirmal Singh Kalsi of Surrey, BC [8] was first to refuse to accept ੴ as ਏਕੁ ਓਅੰਕਾਰੁ (Ek Oankaar) and called it Ekoooo…. I told Kalsi Ji that ‘Ekoooo…’ represents only ‘One’ of ੴ and he has ignored to pronounce open oora ਓ and its extended end (

). On the other hand, S. Manmohan Singh and S. Gurbans Singh are calling ‘One’ in ੴ as ਏਕੰਕਾਰੁ (One and Only) also by ignoring to pronounce both the open oora ਓ and its extended end (

) of open oora ਓ, Basi Ji has gone further very strongly to reject it as a merely long extension of the extended end as calligraphy in some of the Hukamnamas.

Now there is a serious question:
If extended end (

) of open oora ਓ is merely a calligraphic representation then why would Guru Nanak do so?

Guru Nanak has a great vision in designing the logo, ੴ, to represent the God in Sikhi (philosophy), founded by him. I have been explaining this logo in my various articles for the last 20 years [7, 9-11]. Consequently, I have been improving with every objection raised by my critics. Now I am explaining very briefly with special justification for the extended end (

ੴ is composed of three parts:
One (੧) from the numeral, open oora (ਓ ) from Punjabi alphabet; and its extend end (

Note: Geometry is the branch of mathematics that deals measurement, and relationships of points, lines, angles, and figures.

੧ (One): Although ‘One’ is a numeral but it stands for ਏਕੰਕਾਰੁ (ekankaar) as indicated by Bhai Gurdas which means 'One and Only'. Therefore, the ‘One’ is different from the numerical ‘one’. This ‘One’ in Physics is equivalent to ‘Singularity’ in today’s science where energy-matter and space-time occur in highly concentrate form to look like ‘one point’ which becomes invisible where even light is absorbed in it. This state is also called ‘Nothingness’ in science but Guru Nanak calls it ਸੁੰਨੁ (sunn) state or ਨਿਰਗੁਨ (nirgun) state.

English Translation: The open oora (‘ਓ’) means ‘Oh’ and ‘And’. The ‘ਓ’ (Oh) is also used to address a person belonging to a lower status.

): It stands for 'Infinite' meaning (ਬੇਅੰਤ). At the time of Guru Nanak, there was no specific way or word to express ‘infinite’ in any symbol except an open line that can be extended at both ends to any unlimited length.

Therefore, ੴ can be pronounced as ਇਕੁ ਓ ਬੇਅੰਤ (Ek Oh Beant) in Punjabi and as 'The One and Only, That is Infinite' in English. For details please go to eBook, JAP: The Essence of Nanakian Philosophy. [11]

Besides ignoring the interpretation of extended end (

CONCLUSIONS
It is becoming evident that some writers are refusing to pronounce ੴ as ਏਕੁ ਓਅੰਕਾਰੁ (Ek Oankaar) introduced by Bhai Gurdas and replacing it with new pronunciation as ‘Ekoooo’, ‘Ekko’, or ਏਕੰਕਾਰੁ (Ekankaar) which means ‘One and Only’. However, It will take some time for them to accept the importance of extended end (

) of open oora (ਓ ) as infinite (beant) since it is difficult to shed the traditional interpretation or prejudice as mentioned by Einstein:

It is also evident that khanda (☬) was neither designed by Guru Nanak nor by any other Guru. Now, this is also being represented as Trishul of Shiva as ੴ was pronounced as ਏਕੁ ਓਅੰਕਾਰੁ (Ek Oankaar) leading the Sikhs into Vedas and Vedanta philosophies.

Thought on symbols, may be accepted, rejected and contradicted as.an opinion.

All the symbols have relation to origins and ways os nature.

With blessing the symbols are realised.

OAM
Atoms as origin as Trinity Solid Liquid and Gas


CROSS
As root form on energies existing in universe always perpendicular to each other, as magnetic and charge fields.

Yin Yang
As cyclic positive and negative aspects. And in extreme negativity and positivity the unit has both.

Disillusion in form of ritual and disconnection from source information, which is pivot of all lives, bring easy disintegration of society, and easy politics of exploitation.

Once mind connects to source information, veil of Man Made is breaks and merges in Universal Order

All lives comes with signs with no exception.

Simro Raam Naam Ath Nirmal Awar | ਸਿਮਰਹੁ ਰਾਮ ਨਾਮੁ ਅਤਿ ਨਿਰਮਲੁ
]This is a shabad mentioned by respected member Gyani ji a few times so I was keen to explore further. I have given the shabad and literal word meanings. Please have a go at putting these together...