Two years after the long-time government was ousted in Tunisia, some women are enjoying their freedom to wear Islamic clothes such as the niqab, while others are afraid of losing their rights, reports Caroline Anning.

Arije Nasser greets me in her living room in the dusty, wind-blown Tunisian town of Gafsa with the traditional two kisses on the cheek - but through a swathe of black material.

The 22 year-old English student chose to put on the niqab - the full Muslim veil which leaves only the eyes showing - after the Tunisian revolution in 2011.

"I feel like a princess when I walk down the street wearing this," she says. "The niqab and even the hijab were forbidden before the revolution, but now we feel more comfortable to practice our religious activities."

Ms Nasser, and other conservative Tunisians like her, have benefited from the new-found religious freedom in post-revolutionary Tunisia.

With an Islamist party now holding the majority of seats in government, the aggressively secular policies of the old regimes are out, while beards and veils are increasingly in on Tunisia's streets.

That has some Tunisian women worried.

At a recent demonstration, around 800 people pushed down Avenue Habib Bourguiba in central Tunis, chanting for a "secular state" and against "the party of the Brotherhood".

Several middle-aged women were pulling reluctant, gauche teenage girls off the pavement. "March with us - this is your future too" they urged.

"Tunisia has always been an advanced country in the Arab world when it comes to women's rights, but now unfortunately our rights are threatened," blogger Lina Ben Mhenni explained, away from the crowd, the Tunisian flag draped over her shoulders.

"Before the revolution we used to ask for more rights, for total equality, but now we're just trying to preserve and keep the rights we already have," she said.

They can divorce on equal terms and polygamy is banned - in many Muslim countries, men are allowed to take up to four wives - although the law still grants men a greater share of inheritance.

"The situation for women in Tunisia now two years after the fall of the regime is mixed” Amna Guellali Human Rights Watch, Tunisia

The new government, dominated by the Islamist Ennahda party, has not taken away those rights.

Said Ferjani, a senior member of Ennahda's political bureau, said it "is not looking to impose a lifestyle on anyone, we are here to defend freedom".

The party stepped down in a fight over the wording of the new constitution - the draft text had originally referred to "complementarity" between women and men in the family in line with Ennahda's ideology, but after an outcry from women's groups it was changed to "equality".

"Just look at this girl who did a topless protest," said Mr Ferjani. "We protect her rights, but we also protect the rights of women to wear the niqab."

Amina, a 19 year-old Tunisian student, is the topless girl he refers to.

She created a Tunisian Facebook group for the international feminist movement Femen, which uses nudity as a form of protest, and posted a bare-breasted photo of herself with the words "my body is mine, not somebody's honour" written on her chest in Arabic.

Ennahda officials may not openly oppose Amina's actions, but other conservatives do.

A prominent Salafist cleric has called for her to be flogged and stoned to death.

Many Tunisian women feel that their rights are under threat.

"I think the situation for women in Tunisia now two years after the fall of the regime is mixed," said Amna Guellali, director of Human Rights Watch in Tunisia.

She admitted nothing has changed on the legal level regarding the status of women or indeed in her own life, but said "big changes are happening deep in society".

"There are more hardliners, more of these so-called Salafist groups who tend to impose their own vision of society and religion - I think this might have a very strong effect on women."

It remains liberal compared to many of its neighbours; many women are unveiled and even imams and Ennahda officials will often shake a woman's hand.

But more people are choosing to wear the veil, which was officially banned under the old regime.

It is also now not uncommon to see men wearing the garb of the conservative Salafist Islamists - long beard, skull cap and a thobe.

Some women report feeling pressured to start wearing the veil, while young men told me they have been ordered by conservatives to stop drinking or playing dominos.

Sheikh Mohammed Moncef Nasser, a schoolteacher and the imam at a local mosque in the central city of Gafsa, said he has seen a resurgence in interest in Islam since the revolution.

"People are rediscovering their religion, it's natural," he said. "At dawn prayers I used to only have one row of worshippers - now it's five or six, mostly young people."

" I study and I succeed in my studies, I have a love story, I live a normal life” Arije Nasser

Many secularists see this as evidence of foreign influence, particularly from countries like Saudi Arabia and Qatar.

But for Tunisian Islamists, it is a case of publically reclaiming their Muslim and Arab identity after years of being suppressed by the regimes of Mr Ben Ali and Habib Bourguiba.

"I was so happy when I was able to wear the niqab," said Ms Nasser.

As we chatted, she checked her smart phone for messages from her fiancee using fingers clad in black gloves.

This is all because of the presence of her male cousin; when he leaves the room, she lifts the veil to show me her pretty, round face.

"I study and I succeed in my studies, I have a love story, I live a normal life," she said.

"The niqab is not an obstacle for me. But that is my personal choice - people must be educated in Islam, it can't be forced on them."

She revealed that when she first started wearing the niqab, there were only a handful of other women in Gafsa doing the same.

The fears that secular, liberal women have when they see women like her stems from two things, Ms Nasser believes.

One is that people are simply not used to seeing what she called "real Islamists" in Tunisia.

The other is that certain groups of Salafists - what are termed here "jihadi", as opposed to "scientific" Salafists - are giving Islamists a bad name.

"Wear the niqab [or] a bikini on the beach. Just don't try to impose your lifestyle on the others”

"People in Tunisia are always talking about this, but they are wrong.

"The fears of Tunisian women are down to ignorance about our ideology, and there are some Salafists who give Salafism a bad name," he admits.

"Our relation with women is based on respect and that each one respects his or her tasks in this life.

"What we see today is that we have entered into confusion about men's tasks and women's tasks," Mr Jamal adds.

It is remarks like that which have some Tunisian women concerned.

There is a pervasive belief among the party's opponents that Ennahda is quietly working with the Salafists.

Mr Ferjani tried to calm their fears: "Ennahda believes people can speak out and cherish whatever they wish to, so long as they are peaceful. If you are peaceful, wear the niqab [or] a bikini on the beach. Just don't try to impose your lifestyle on the others," he said.

For Samira Aloui, a teacher from Kesserine, and other women like her, those sentiments ring hollow.

"Ennahda is two-faced," she said. "We don't know what to believe with them - they use religion as a front. But when it comes to women's rights, we want to go forward not back." 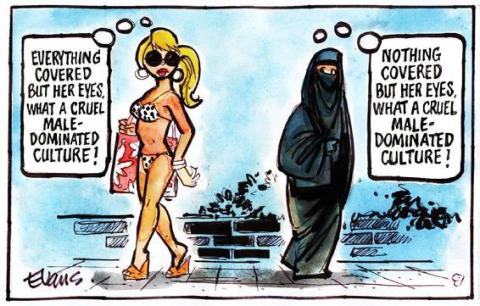