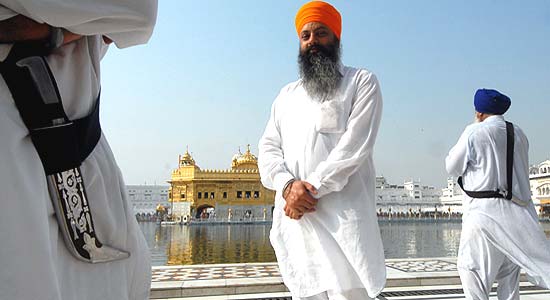 That is exactly what Ishar Singh does for a living. He buys and sells property just 80 kilometres from the Sikhs’ most violent and traumatic battle in centuries, if you do not include the savagery of India’s partition in 1947.

Ishar Singh is 37, the same age his father was the night he was killed in the devastated Akal Takht after the army sent tanks into the parikrama of the Golden Temple. “My father died four days after his birthday,” Ishar said. 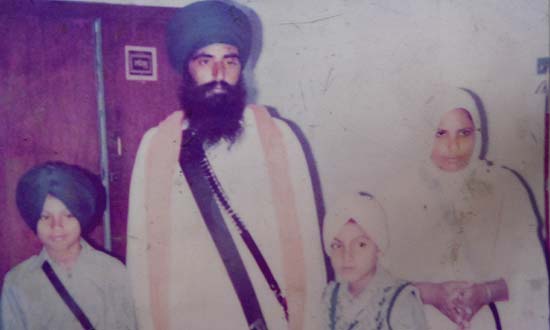 Family photo: The sant with wife, sons​
Ishar was just five years old when Jarnail Singh Brar was anointed the 12th jathedar of the Damdami Taksal. He left home and adopted the “Bhindranwale” after the village of Bhindran Kalan where the sect was originally located. “After that we only saw our father at his satsangs,” Ishar said. “But we were well looked after.” Did he miss his father?
“From the family point of view I was sad, but from a Sikh point of view I was very happy.” The Jalandhar editor waved a laminated family photograph at me—a very young Ishar Singh with his eyes shut, an oddly self-conscious Sant Bhindranwale, his younger son Inderjit, his wife Pritam Kaur.

When he was 10, Ishar Singh was sent to study Gurbani under Mahant Jagir Singh at Akhara village near Jagraon. Immediately after Operation Bluestar, Pritam Kaur moved with her young sons to her brother’s home in Bilaspur village in Moga district.

Ishar does not have his father’s piercing gaze. He has a good sense of humour, but not the earthy wit that Jarnail Singh flashed as he held court on the rooftop of the Guru Nanak Niwas in Amritsar. Ordinary folk tiptoed into a meeting with him. There was always a hint of menace, helped by the young men lounging nearby with their rifles.
“I was detained for two days by the police in 1988 and tortured,” Ishar says, “but they had to let me go.” He was a good student, and stood first in his Class 10 examination in Sangrur district, winning a scholarship for the final two years of his matriculation. But just then, in 1991, he married Amandeep Kaur, whose father Joginder Singh perished with Bhindranwale in the fighting at the Golden Temple. Ishar never went to university. “My wife completed her BA,” he says proudly. He himself became a dairy farmer, and grew two crops, kank (wheat) and jhona (rice) on the family land.

“Many people offered to help us,” Ishar said. “We were never in need. My father did everything for the people, and they loved him.”

What had his father left him, besides the name? “What more can he give me?” Ishar said. “I’m very, very proud of him. I can never be bigger than him. I can’t add to his name, only reduce it.”

Ishar Singh does not believe his father ever preached violence. Could he begin to imagine the tension in Punjab in the early 1980s, Bhindranwale’s defiant, gun-toting drive through Delhi, the skirmishes on the periphery of the Golden Temple, the drive-by shootings of innocent civilians in Delhi, the assassinations of prominent opponents, and the terror in the air?

“My father never threatened, he only replied (to threats),” Ishar Singh said in the Jalandhar office. “He was accused of ordering the deaths of 70 Hindus for every dead Sikh. He was misquoted. Bal Thackeray had said India has 70 crore Hindus and two crore Sikhs and there are 35 Hindus to every Sikh. The Tenth Guru (Gobind Singh) had said each Khalsa can fight 1,25,000 enemies. My father only said each Khalsa can take on 70 enemies, and this was distorted.”
Whatever the ratio, I remember a tense journey in a state transport bus from Amritsar to Delhi in early 1984. The Sikh passengers were clustered near the driver, and the Hindu passengers were huddled in the rear. Nobody spoke. Only when the bus reached Ambala, and Punjab was behind us, did everybody relax. Today Punjab’s highways are four-lane and traffic moves at high speed, save for the occasional tractor or the farmer with his wife riding pillion. Sometimes Bluestar seems 25 light years away.

So were Ishar Singh, his brother and his mother content with anonymity after the carnage of 1984 in Punjab and Delhi? Both he and Inderjit applied for passports, he said, and were turned down. “But you know how it is in India. Somebody pulled strings and we got our passports.” Inderjit emigrated to Canada in 1999; Ishar is reticent about where his brother works. A plastic factory, is all he will say. He himself has travelled to Britain, Australia, New Zealand and Canada.

Ishar said his father never believed in politics, only in dharma. “Politics is based on deception, religion on morals,” he said. So how did he reconcile this with his own work as a property dealer, where so much black money is sloshing around? His reply was elliptical. “The government wants 45 lakh rupees to convert one acre to residential use,” he said. “How can this be honest?”

We were meeting on the eve of Gandhi Jayanti. Did he think Gandhi.... Ishar did not let me complete my question. “Don’t talk about Gandhi,” he said. “He betrayed the Sikhs in 1947.” And Brar the editor said, “Whenever we talk about a weakling, we call him ‘Gandhi’.” Ishar Singh laughed heartily, his eyes shining.

What about his own children? Ishar Singh spoke proudly about his daughter Jeevanjyot, who is 16. She studied “non-medical” subjects like physics, chemistry and mathematics, he said. What did she want to be? An interior designer, he said. That would be a lucrative choice, I said. He laughed again, in agreement. His son Gurkanwar is 13 and he does not know where his life will lead.

As we parted, Ishar Singh said, very much the realtor: “Tell me if you need a car. I have two or three. I can arrange anything. People are always prepared to help me.” We agreed to meet the following day at the Golden Temple for pictures.

The next morning Ishar Singh came to the Golden Temple with Bhai Ajaib Singh, an old associate of his father’s. Ajaib Singh said Ishar was the president of the Sant Kartar Singh Educational Trust, which runs two schools and a hospital in and near Mehta Chowk where the Damdami Taksal is headquartered. A tall Sikh in traditional attire was walking down the jute matting atop the marble parikrama, and both Ishar Singh and his companion stooped to touch his feet. “That was Giani Jaswinder Singh, the head granthi of the Harmandir Sahib,” Ishar said.

The Harmandir Sahib looked as glorious in the sunshine as it did 25 years ago. The Akal Takht, blackened and pocked by tank shells and heavy gunfire during the ****** fighting, had been restored to its old splendour. At the rear rose rows of whitewashed rooms where pilgrims could speed up the long waiting lists of akhand paths. The government has acquired land around the temple and landscaped it, except in the front where old shops still stand cheek by jowl, doomed to be moved soon. The quiet and peace was punctuated only by the shabad kirtan broadcast round the clock from the inner sanctum.

Thousands of people hurried about their devotions, oblivious of Ishar Singh as he posed for the photographer. Nobody came up to him in awe or reverence. He wore a saffron turban on this day, and he looked like just another pilgrim come to pay his respects.

Waiting to bid him farewell, I watched while Ishar Singh fiddled with one of his two cellphones, standing still among the milling worshippers. He appeared to be looking for something. Finally he said, “I want to show you something. Let’s move to the shade in the portico.” There, he proudly held out a picture on his phone. “My family,” he said. “That’s me, my wife, my son, my daughter.”
<hr style="color: rgb(204, 204, 204); height: 1px;"> (The author, an award-winning journalist, covered the events in Punjab for Reuters in the 1980s.)