As the old man entered the narrow street in an old residential area in downtown Lahore, he immediately drew the interest of all those in the street. The neighbours engaging in a boisterous chat paused in mid-conversation, one of the children about to throw ball stopped his arm in mid-air and the group of women returning from their grocery shopping slowed down to get a better look. There was nothing extraordinary about his appearance, but it was a pram-like contraption he was pushing in front of him that attracted all the attention. The old man quite conscious of the fact that he had captured everyone's interest merely by walking into the street, gave a loud call, announcing his entry. 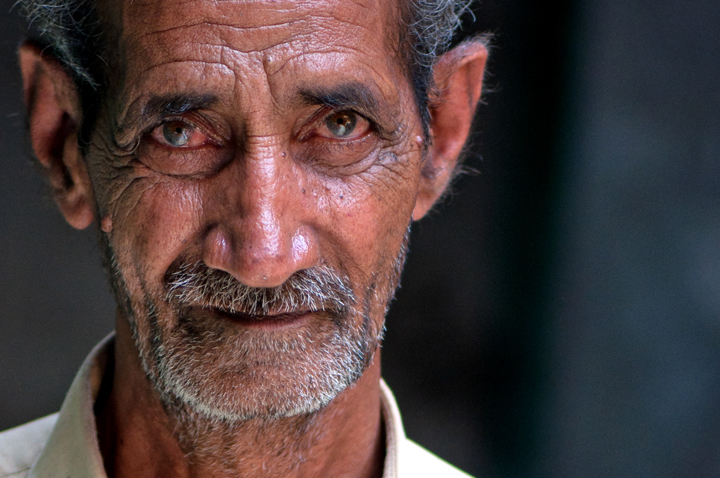 "Lachaay wala!" he called out, in a sound that seemed unnaturally loud for the aged man. While his proclamation cleared the confused expressions on some faces, others were still transfixed. He called out a few times more as he continued to walk pushing the strange equipment in front of him until he reached a junction with another narrow alley. He stopped there, moved around to one side of his machine and squatting down he set to work. 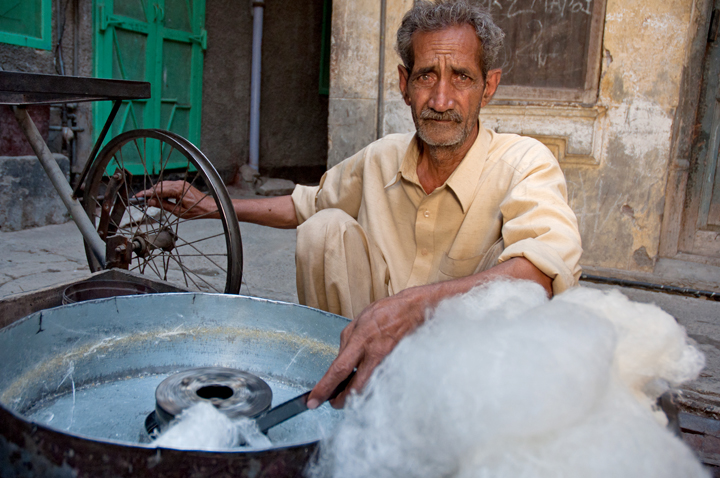 Candy floss man sets to work, Khalil shah, 2011
Spinning a wheel on one side of the machine, he held a small thin metal rod close to the centre of the basin like structure in the middle of the machine. Slowly an amorphous mass of wool-like matter started to accumulate around the metal rod, which he would twist every now and then to keep the matter from falling down. A few of the people had gathered around him and one of them who probably knew what a 'lacha' was, was telling the others how it used to be the favourite treat for him and his friends when they were children. The old man stopped spinning the wheel, took out the thin metal rod from the wool-like mass and put a long thin ice cream stick in its place; with a smile he offered the candyfloss to his first customer! 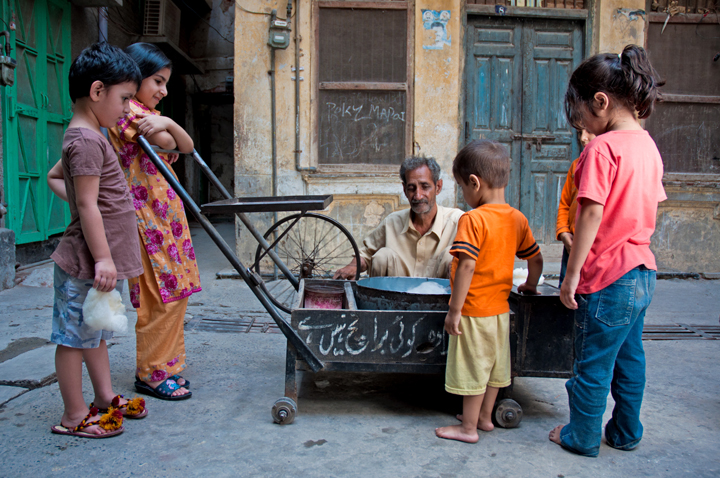 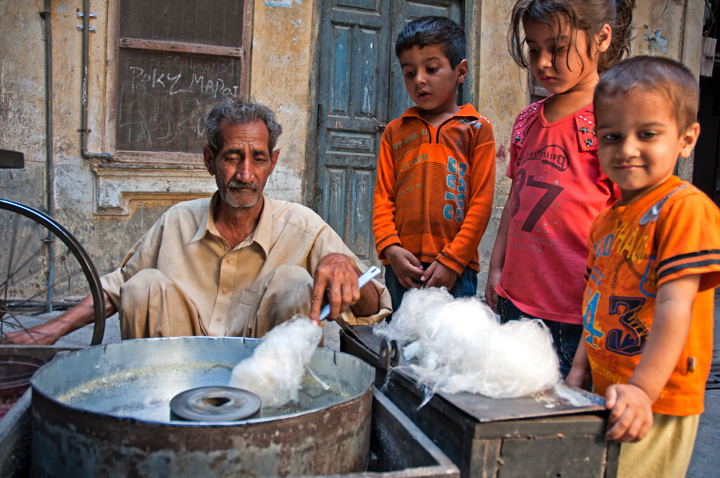 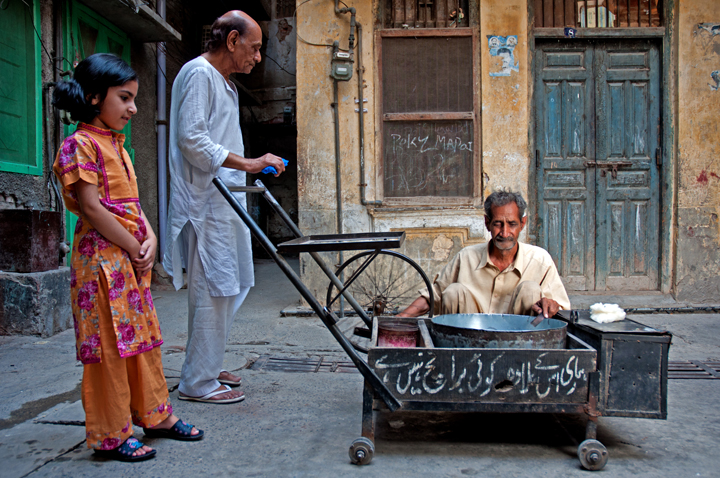 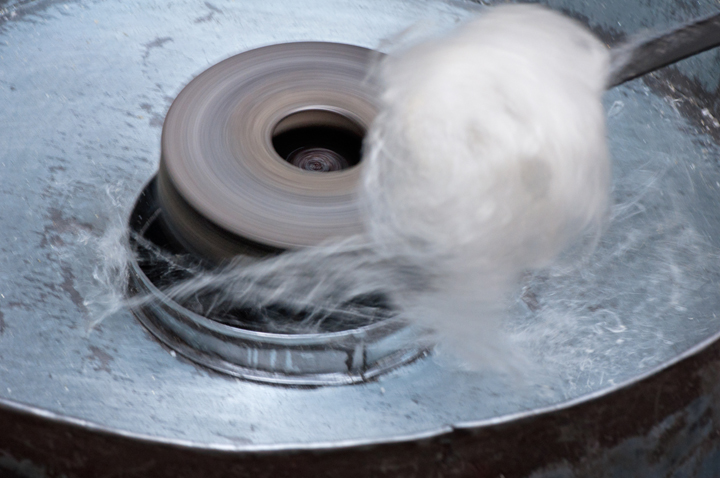 As the first customer enjoyed the sweet treat, others gathered around just to see how it was made. The old man had set to work again. It turned out that none of the children in the street had ever eaten any candyfloss; even though most of the adults there had eaten candyfloss in their childhood, nobody there had ever seen it being made!
I ran into this old man on my way back home one afternoon. He was pushing ahead, his candyfloss machine, his sole means of livelihood, his profession, his career and his specialty, all in a small cart and still finding it difficult to get any customers. It made me realise how drastically the changing times affect some professions. A few days before that chance meeting, I had come across an article in a tech magazine titled "Top Professions in Demand Nowadays Did Not Exist Ten Years Ago". By means of this blog post and photographs, I aim to bring attention to the flipside, i.e. some means of livelihood well known a few years ago may now be non-existent. If it were twenty years ago, this candyfloss hawker would not have been able to walk the streets as he is doing now, because he would have been surrounded by customers most of the day! The wrinkles etched in his face reflect the difficult times this once popular 'candyfloss man' has seen in the recent past. I brought him to my neighbourhood so the children could learn about the candyfloss and my contemporaries could enjoy a sweet treat and a forgotten dessert. 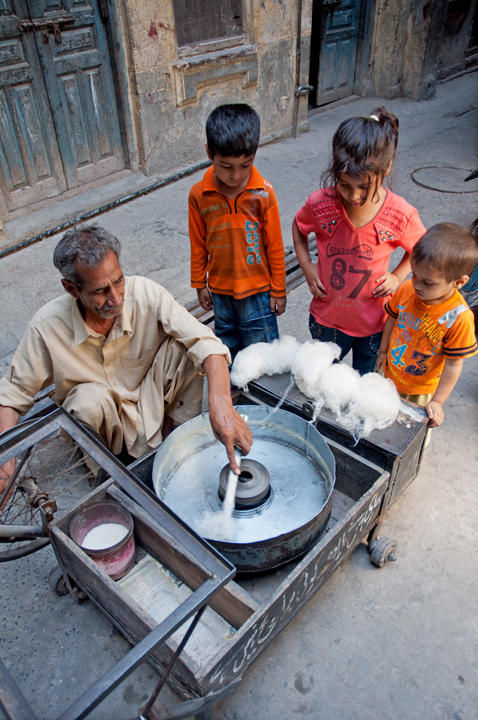 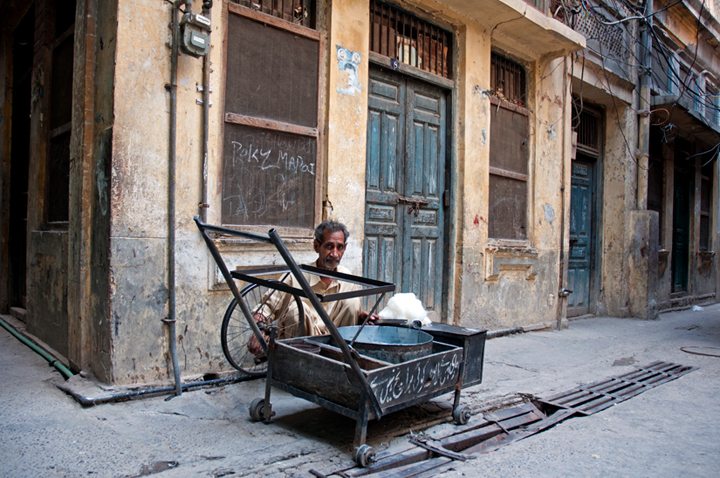 Not many customers today either, Khalil shah, 2011

No matter what place, time, stomach status it is; we always go for the candy floss / cotton candy
S

How dignified the old man looks in the pictures ! No doubt he practices a lowly profession - but portrays the true principles of Sikhism - 'Dasaan Nahan Dee Kirat Kamye'.

As a child sent to live with my grandparents in Punjab, I missed England hugely, when I first came across the candyfloss man, it was a welcome surprise, (he even looked similar!)

We as naughty little kids used to call it "Budhi Maen da Zhattah"/(Like) Hair of an old woman.
Indeed lot of memories.