(Courtesy photo) Jesus (Diogo Morgado) is greeted by his followers in “The Bible.”
<!-- GET HEADLINE --><!-- GET DECK --><!-- GET BYLINE --><!-- PRIORITY CHECK -->‘Bible’ debut draws biggest audience of year on History
By Andy Fixmer and Michael White
| Bloomberg News

<!--/FileInclude:Normal, /csp/cms/sites/sltrib/assets/includes/fullstory3info.csp, took .013705 -->Burnett, an avowed Christian, and his wife, "Touched by an Angel" star Roma Downey, shot the series over six months in Morocco and enlisted pastors Rick Warren and Joel Osteen, and Cardinal Donald Wuerl, Archbishop of Washington, to connect with Christian audiences. The, strategy pioneered by Mel Gibson with his theatrical film "The Passion of the Christ," culminated with a presentation to 500 clergy on March 2.
<!-- Counter 3-->"We believe our Bible series has the potential to reach not only those who already go to church but could reach a whole new generation of people who have never been to church," Burnett said in a video posted on Google Inc.’s YouTube. "People that may never have read the Bible will get to see those Bible stories in this series."
<!-- Counter 4-->To promote the series, Burnett reached out to Protestant and Roman Catholic church leaders, touting the project as a teaching aid for use in sermons and weekly study groups. Gibson’s "The Passion of the Christ" cost $30 million and generated $612 million in worldwide ticket sales, according to Box Office Mojo.
<!-- Counter 5-->Smaller faith-affirming films, such as "Fireproof" have also successfully based marketing on outreach to churches, said Ted Baehr, chairman of the Christian Film & Television Commission, a group that advises studios.
<!-- Counter 6-->"Fireproof" was made for $500,000 and had sales of $33.5 million. Religious audiences trust a minister’s recommendation more than studio ads or reviews by mainstream critics, he said.
<!-- Counter 7-->"The market exists. You’ve just got to reach them through the venues that they are using," Baehr said. "You have to get to what they watch and where they go."
<!-- Counter 8-->At the March 2 meeting, Warren, head of Saddleback Church in Lake Forest, California, told the audience of about 500 he would shape his next five Sunday sermons around the series. He urged clergy, including others watching a webcast of the event, to do the same.
<!-- Counter 9-->"Don’t miss this opportunity," Warren said. "This is a wave. Part of leadership is catching the wave. God is about to do something really great."


I watched a re-run of the debut from last Sunday, and it was amazing !
It is just at the beginning with Abraham and Moses.
The scene where Abraham was about to sacrifice his son was very touching and the special effects when God parts the Red sea for Moses and the Israelites is years ahead of the classic we saw in Charlton Heston's 'Ten Commandments'.

This is becoming the most talked about TV show ahead of American Idol this week.

Funny enough, my kids were asking WHY Abraham was chosen by God, and why God spoke to Abraham ?
Along with how the film went, I enjoyed clarifying that Abraham was different to all the others since he knew there was only ONE God.
The people of that time were worshipping all sorts of stones, plants, stars..etc.. and having numerous different worship figures!
But, Abraham was different which is why he was chosen to go and start a new generation of descendents in the promised land.
These people would then have the correct belief in the ONE God.
In a very similar way,there are some striking similarities with sikhisms Guru Nanak Dev ji and his belief in only the ONE God along with Abrahams belief.

I'm not sure if they are being broadcast on History channel across the globe at the same times. But they are on every Sunday until the final on Easter Sunday.
I assume that they will be on SKY and satellite in UK and further, but it's worth checking.

More details about the ''The Bible'' series at below link
http://www.bibleseries.tv/
Last edited: Mar 10, 2013

Why “The Bible” TV Series Is So Popular 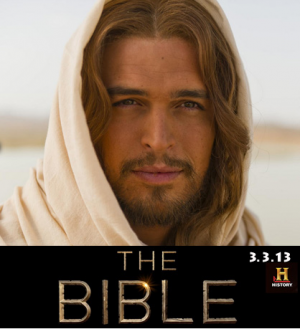 I’ve been asked by a number of reporters my opinion on why Mark Burnett’s TV series on The Bible has been so wildly popular. It’s not hard to figure out, but I’m really quite amazed at the number of mainstream reporters who are baffled by it’s success. In most cases, I refer them to three reasons articulated very well by marketing expert Jonathan Bock at Grace Hill Media:
1) It’s popular because it’s agenda-free. It’s not the usual provocative or speculative approach of “Jesus: Did He Secretly Marry Mary Magdalene?” Or “Jesus: Was He Gay?” It’s just the story of the Bible with no slant and no agenda.
2) It’s popular because it’s unifying. There were more than 40 scholars, theologians, and pastors from the entire spectrum of Christianity involved in advising the production. It was designed to appeal to the wide range of Christians, not divide the audience.
3) It’s popular because not only does each episode have a compelling story arc, but the entire series tells the meta-narrative of God and how he deals with humanity.
But with few exceptions, I’ve dealt with reporters or seen other stories by reporters who are mystified at its success. But then again in a nation that has pretty much no knowledge of the Bible’s impact on Western culture, this is to be expected. I remember years ago after President George Bush made a reference to the “Walls of Jericho,” a network TV reporter responded that he had no idea what the Walls of Jericho were, but he’d check it out and get back to us.
I’ve said before that with an estimated 90 million evangelical Christians in the United States, the Christian community is the largest special interest group in America. Entertainment and media companies are only shooting themselves in the foot by not taking that audience seriously.

It has been an enjoyable Sunday for the whole family in the last few weeks to watch this well made TV series.
I look forward to tonights 2 episodes before the final next weekend.

The producer of the series is Mark Burnett who has produced hits like: Survivor, The (Celebrity)Apprentice, Shark Tank, The Voice, Are You Smarter than the 5th Grader to name a few and now this, The Bible series. All his series are well produced keeping in mind his audience the central piece. He knows the pulse and the psyche of his audiences. In other words, he knows the brain cortex of the human being internationally because his shows are watched by millions worldwide. It seems as if he has opened the Hard Drives of the watchers and inserted the programs there like viruses which feel the need to have more of them in order to keep on functioning.He knows how to captivate the audiences' emotions and hence make them want more.The vast horizon of his shows prove that.

He also knows how to choose the right TV channels for his shows. The case in point is The Bible TV series. He chose the History Channel to give it a more legitimacy no matter if the whole story may be true or not. The same History Channel also produces shows like Pawn Stars, American Pickers, American Restoration, Big Bounty Hunters and many more which have nothing to do with any kind of history but its own.

This genius needs his neurons studied to demystify this whole phenomena.