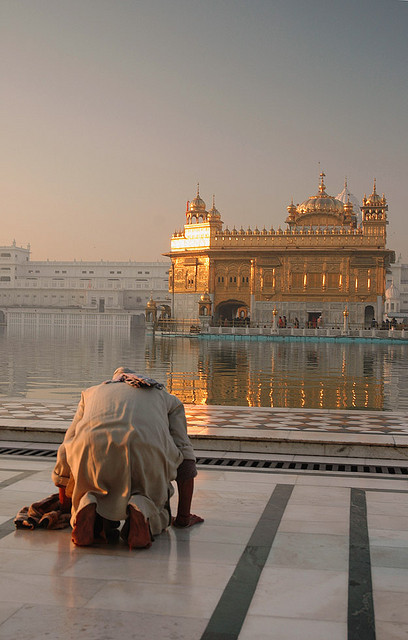 Image from Flickr via kkoshy​
By Mallika Kaur
Thirty years have passed since journalists were cut off from Punjab, and Punjab from the world. In June of each year, Sikhs throng to gurudwaras to observe one of the most significant of their religious holidays. On this day, when even the less observant find their way to gurudwaras, the Indian Army attacked Darbar Sahib—the Golden Temple, the Sikh Vatican —and dozens of other gurudwaras across the state.
An estimated ten thousand never returned to claim their shoes from the entrance to the Darbar Sahib. That the exact number of civilian casualties remains unknown signifies precisely why June 1984 is relevant today. More so, in light of India’s May 2014 election and the fierce debates it raised about the status of India’s minority communities.
The army’s operation, code named “Blue Star,” began with the forced eviction of all foreign journalists from Punjab. This, coupled with a state-wide curfew enforced by soldiers, limited the documentation of the civilian experience. However, the people’s memory of these events has been preserved successfully.

Why does public conversation about June 1984 sputter to a stall in Indian circles?
​
In 1995, anthropologist Joyce Pettigrew, having studied the killing fields of Punjab in 1992-94, summarized her fieldwork in Punjab: “The Army went into Darbar Sahib not to eliminate a political figure or a political movement but to suppress the culture of a people, to attack their heart, to strike a blow at their spirit and self-confidence.”
Last year, British documents, de-classified under a 30-year rule, revealed letters between Margaret Thatcher and Indira Gandhi revealing the latter’s plan for attacking Amritsar. Dated February 1984, these communications took place four months before “Blue Star,” long trotted out as an exigent army action due to unavoidable urgency.
And memory-keeping was a burden not even anticipated by the Sikhs, as world media stood outraged by the events. A “virtual massacre” reported The Guardian; “whole of Punjab…turned into a concentration camp” declared the Christian Science Monitor; and when the Indian government issued arrest warrants for AP’s journalist, the New York Times joined others in vociferous protests, asserting that his only crime was “doing his job too well.”
Despite all this, why does public conversation about June 1984 sputter to a stall in Indian circles? At most, it revolves briefly around the collateral of a firefight between the Army and Sikh leader Bhinderanwale’s men who put up a stiff fight for three days in Amritsar. Suggestions for greater truth-telling about civilian losses again render Sikhs as suspects, illustrating political and societal immaturity.
June 1984, and the subsequent anti-Sikh pogroms across India (organized post Indira Gandhi’s assassination), were followed ominously by the responsible Congress Party winning a national election victory. This landslide is still unprecedented in Indian history, May 2014 victory of another Party accused of pogroms notwithstanding.
Noting what happened after the June 1984 firefight highlights at least three legacies of June 1984 that are all the more relevant to India in 2014.

Mallika Kaur is a lawyer who focuses on gender and minority issues in the U.S. and South Asia. She has a J.D. from The UC Berkeley School of Law and M.P.P from Harvard Kennedy School of Government. She is volunteering with the 1984 Living History Project this 30th anniversary year.
You must log in or register to reply here.
Share:
Facebook Twitter Reddit Pinterest Tumblr WhatsApp Email Share Link