India Sushma Thanks PM For Statement On CVC, BJP Says Not Enough 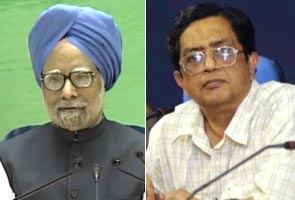 New Delhi: On an official trip to Jammu, questions put to the Prime Minister focused only on the political developments in Delhi in the last 24 hours.

The Supreme Court yesterday struck the government hard by declaring that PJ Thomas' appointment as India's Chief Vigilance Commissioner was invalid. Mr Thomas was selected in September by a three-member committee consisting of the PM, the Home Minister and Leader of the Opposition Sushma Swaraj. The court said that the corruption charges pending against Mr Thomas should have ruled him out for a job that requires him to check corruption among government officials and bureaucrats.

Dr Manmohan Singh said today that he accepts responsibility and "I respect the judgement of the Supreme Court... it is necessary to ensure that such things don't happen again.... this is not a question that relates to coalition compulsions."

Ms Swaraj reciprocated with equal grace, calling a truce. "I appreciate the statement of the PM owning responsibility... I think this is enough, let matters rest at this and we move forward," she tweeted.

But she apparently does not speak for her party. Sources in the BJP say they will not stop their attack against the PM, declaring him directly responsible for the morass of Mr Thomas' selection.

"The very fact that the PM has admitted his guilt and accepted that it was a fault on his part - appointing a man whose credentials were not good enough to be appointed as the CVC is welcome... but this very statement does not absolve the PM of his moral responsibility," said Rajiv Pratap Rudy, BJP spokesman.

The BJP and the Left have demanded an explanation from the PM in Parliament. The strong remarks made by the Supreme Court against M Thomas' selection committee, led by the PM, presented the BJP with an ace. Sushma Swaraj had placed on record her objections to Mr Thomas' candidacy. At different public events since, she reiterated her criticism.

Mr Thomas was a senior bureaucrat in Kerala in the early 90s when he allegedly pushed a deal for the import of edible oil or Palmolein from Malaysia. Later, it turned out that the government lost money on a deal that many alleged was prenatally corrupt. Mr Thomas was then accused of corruption. But depending on who was in power in Kerala, the case moved in fits and starts, with the Left government pushing it, and the Congress-led government of K Karunakaran trying to stall it. Karunakaran, who was the Chief Minister when the Palmolein deal happened, was among those accused.

The Opposition's determination to corner the PM on Mr Thomas' selection has the Congress prepping its strategy for a debate in Parliament. Sources say the party will argue that it erred in the selection process because the documents on the case against Mr Thomas were not presented to the PM and his committee; and that while the Left has been critical of Mr Thomas in the last few months, its own chief minister in Kerala VS Achuthanandan appointed Mr Thomas Chief Secretary of Kerala in 2007.

Also that he was later given vigilance clearance by the CVC, the highest body that looks into corruption by public officials and bureaucrats.
http://www.ndtv.com/article/india/i-accept-my-responsibility-prime-minister-on-cvc-89446
Rajneesh Madhok
Last edited: Mar 4, 2011