There’s a new superhero in town and he doesn’t sport a cape, mask or wear embarrassing tights. He wears a turban and sports a beard.

His name is Deep Singh – and he fights the Taliban! 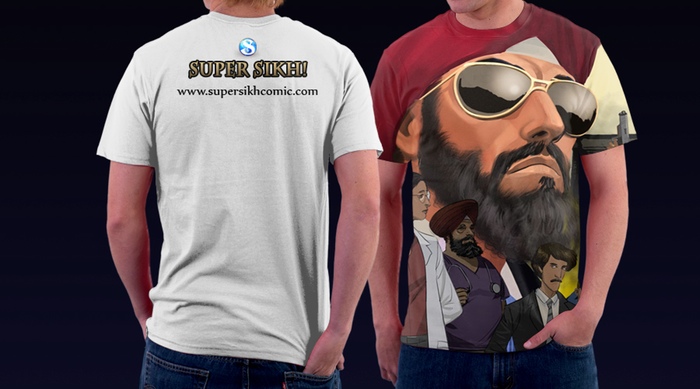 You can meet this Sikh badass super agent in the first issue of ‘Super Sikh‘, due out in March. Deep Singh travels to Graceland (he’s a huge Elvis fan), where he fights off agents of the Taliban who are tailing him and doing what bad guys always do -- trying to kill him.

Super Sikh is the brainchild of Oakland-based writer Eileen Alden and Silicon Valley executive, Supreet Singh Manchada. The pair launched a Kickstarter campaign early this year to “help bring the first turbaned Sikh ‘super hero‘ to life.” In just 27 hours they had enough to produce the first issue. By February, they exceeded their original goal of $5000, raising more than $22,000.

Eileen and Supreet have brought in award-winning illustrator Amit Tayal, whose work has been published internationally. The Kickstarter money ensures at least three issues of the series.

There are than 30 million Sikhs worldwide and about a million living in the USA. According to comicbookreligion.com, there are already 20 turban-wearing Sikh heroes and villains in comic books.

So what sets Super Sikh apart?

The Kickstarter campaign says Deep Singh is a “skillful, smart and very well-trained British Special Air Service agent.” That sounds a bit like James Bond. But Deep Singh’s creators promise a new kind of hero – “a modern hero in a turban who loves Elvis and hates bad guys,” and “will uphold his Sikh values even while he is living in a modern world with all of its complexity.”

Hopefully the comic will shed light on this 15th-century religion, perhaps one of the most misunderstood groups on the planet. In this post-9/11 era, their turbans, beards and head scarves have made Sikh men and women --- mistaken for Muslims and Arabs -- targets of hundreds of hate crimes and bullying. People, ignorant to the fact that Sikhism has no relation to Islam, mistake them for terrorists.

In 2011, two Sikhs were shot in Elk Grove. One of the victims died. Supreet said he was bullied when he was a child, and that was one of the reasons he co-created this comic. He says, “I’ve always wanted to create a character that was a Sikh, but I never found someone who could write it and conceptualize it. What I needed was Eileen.”

SuperSikh will be printed in English. A digital version in Punjabi, Spanish and Mandarin will come later. There will be “crazy, PG-13 bad guys,” and a hero who uses “great internal pose of intuition, training, physical and mental strength, not a person who is granted supernatural powers or a mutant transformation.”

Eileen describes Deep Singh as a cross between Batman and Jason Bourne.

This is an exciting news! SPN wishes you all the best in your endeavors!

Writer
SPNer
Thanks for the reminder. I love the artwork. Looking forward to the comics.
E

This is an exciting news! SPN wishes you all the best in your endeavors!

Thank you so much! I will keep everyone posted as we go.
E

ActsOfGod said:
Thanks for the reminder. I love the artwork. Looking forward to the comics.
Click to expand...

Thank you for your support! I really appreciate it.

SPNer
Eileen ji, the checkout with PayPal is not working on your website... clicking it takes to a blank page... please look into it...
E

Admin Singh said:
Eileen ji, the checkout with PayPal is not working on your website... clicking it takes to a blank page... please look into it...
Click to expand...

oh no! i will get in touch with the tech support right away, i'm so sorry to hear that. there were a few issues with using the site via Safari last week, if you have Chrome that might work better, but in any case i will follow up.

if you still have any trouble (or anyone) please just email me directly at info@supersikhcomics.com and i will sort it out for you. much thanks!

SPNer
Re-checked in all browsers:

SPNer
Supporter
supersikhcomics.com
Ugh, Veer Ji I do not have an emoticon to display the amount of frustration I have hearing this - so sorry about the trouble! Some orders are going through but I have no idea why it is not working for you in this case because you have tried everything I can think of, but I have opened a ticket with the site and will send you a message. Thanks -Eileen
You must log in or register to reply here.
Share:
Facebook Twitter Reddit Pinterest Tumblr WhatsApp Email Share Link