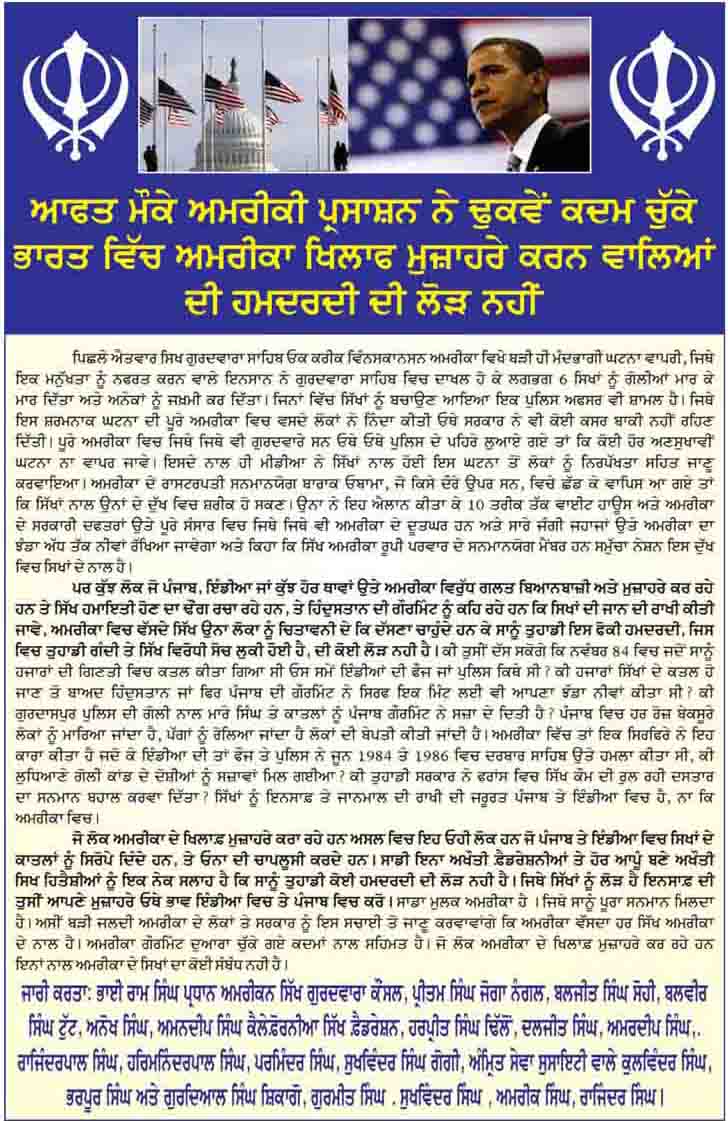 UNOFFICIAL ENGLISH TRANSLATION OF THE PUNJABI ARTICLE ABOVE
(http://www.sikhphilosophy.net/unite...merican-sikh-gurdwara-council.html#post169151)

​
People Demonstrating Against America in India, No Need for Their Sympathy

​
Last Sunday, at Sikh Gurdwara Sahib, Oak Creek Wisconsin, America a bad accident happened, where a man as humanity hater entered a Gurdwara and killed approximately six Sikhs and injured many other. Included is a Police Officer who came to save the Sikhs. Whereas the shameful incident was condemned across America, the Government also did not leave any stone unturned. All across America, wherever there were Gurdwaras police patrols were placed so that any other unfortunate incident may not occur. Alongside, the media impartially conveyed the incident to the people. American President, respectful Barack Obama , who was on a tour, interrupted mid way and returned to partake in the hurt of the Sikhs. He proclaimed that till the 10<sup>th</sup>, Whitehouse and all American Government Offices, all across the world where there were American Consulates and at all Warships the American flag will be flown Half-mast (half staff), he stated that Sikhs were Honourable members of American mosaic. The whole nation is with the Sikhs in this tragedy.

But some people in Punjab, India and at some other places have proclaimed falsely against America and have been demonstrating in game play claiming to be well wishers, and asking the Indian Government to protect the lives of Sikhs. Sikhs residing in America warn and inform such people that their pretentious sympathy, with camouflaged dirty and anti-Sikh thinking bears no need. Can you tell when thousands were murdered in November 84 where was the Indian Army and Police? After the murder of thousands of Sikhs, was the flag lowered even for a minute by the Government of Punjab or India? Did the murderers form Gurdaspur Police who shot people dead get punished? Innocent people are murdered everyday, turbans are desecrated, and people are dishonored. In America one crazy head did this, while Indian Army and Police attacked Darbar Sahib from June 1984 to 1986. Did the Ludhiana Goalie Kand culprits face punishment? Did your Government restore the dignity of the desecrated turban of Sikh community in France? Sikhs need protection of life and property in Punjab and India, and not in America.

Such people instigating demonstrations against America are in reality the same people who bestow honor to murderers of Sikhs in Punjab and India, and kiss their behind. Our honest advice to such self made Federations and Sikh well wishers is that we don’t need your sympathy. Where Sikhs need justice, meaning in India and Punjab, so do your demonstrations there. Our country is America. Where we receive full honor. Very shortly we will so inform the American people and the Government of the truth that every Sikh residing in America, is with America. We agree with the steps taken by the American Government. Those people demonstrating against America, the American Sikhs have no relationship with them .

WELL SAID. I hope the Indians get the point...(Delhi/Punjab and even the UK Akali dal types...)

I wonder if you had considered a few points raised in the following link, before liking it!

All of you know if this act was by some sikh or muslim or other non-white, it would have got discussed by peeling layers of hairs... and clips shown through out days, weeks, months.. memorials made etc... commentators, newspapers, TV and what not!

All of you can easily label me racist, which I am not! I am just tabling the facts which sychophants are simply ignoring!

And this psycho worked in psychological operations of US Army?! Wow...
And other one Mr. Holmes PhD dropout of Neurosciences!

Information explosion is making people crazy for sure.

With Love and Regards for All,
Arvind.

Apparently the task force is also headed to Hawaii to investigate a toilet malfunction in Honolulu Gurdwara, followed by a quick trip to Thailand where there is some rumour of the same daal being served twice in the same week, as these trips are going to be more frequent, there is suggestion of an SPGC air force one type plane to ferry investigators to scenes where they may be useful.

Obviously it will have a small red light on top

harry haller said:
Apparently the task force is also headed to Hawaii to investigate a toilet malfunction in Honolulu Gurdwara, followed by a quick trip to Thailand where there is some rumour of the same daal being served twice in the same week, as these trips are going to be more frequent, there is suggestion of an SPGC air force one type plane to ferry investigators to scenes where they may be useful.

Obviously it will have a small red light on top
Click to expand...

The USA only got ONE President..so Air Force ONE is enough.....SGPC..has got President makkarr..then we have the FIVE Jathedars...and their FAMILIES...Committees...how is ONE Airplane going to be enough ?? And the Planes all got to be the Heavy Duty Cargo Carriers..knowing the "Gifts" these Sikh Leaders will bring back from their foreign trips - like the Golden Khandas they brought back form investigating the Chicago baba counselling the fair lady in a hotel room...

And "Small" red light....you must be joking sir...small red lights are carried on the cars of those in sgpc who sweep the corridors.or catch dead fish in the sarovars ( YES Sikhs being vegetarian only catch DEAD FISH ).these higher ups need Red Lights as big as Flying Saucers...IF the entire Plane is a Lighted Red flasher..much better...