I know I am not alone in this exercise but I have often wondered about the facility with which our gurduaras multiply.

I remember when my standing response, admittedly a somewhat tasteless joke, to non-Sikhs who asked if we had a Sikh place of worship nearby was in the genre of black humor. Yes, I would say, we had a couple but the nearest one was about 3000 miles away in California or British Columbia. It often elicited a few uneasy guffaws. 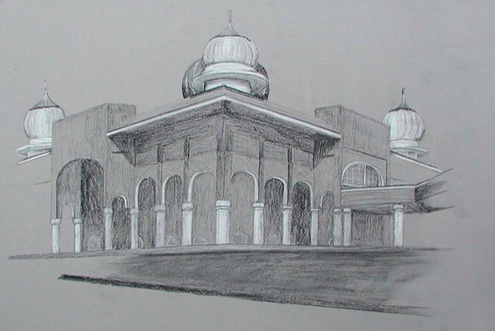 Yes, our gurduaras multiply like fruit flies but I venture the explosive opinion that most of our gurduaras are largely dysfunctional in that their focus is on a life beyond our Earthly existence while they absolutely fail to adequately interconnect the worshippers to each other or to our lives here and now.

What then would be more critical than building bridges to span this inter-generational abyss? After all, the old will die soon enough and the young will become old soon enough. With the existing gap between them how would there be any possibility of transmitting the realities and values of a living culture across generations and how will any progress happen?

The old and the young have to learn how to sit and break bread together. They have to be able to identify and nurture practices and habits that both old and young can share and enjoy together.

Is this even a possibility? Yes, I think because my wife and I just returned from a day-long event that grandly hints at how to bridge the intergenerational span.

The day featured a 5-K run in a public park on a glorious heavenly sunny Sunday morning.

Young people designed the initiative. They arranged with the town for the facility. These computer savvy young mavens personally solicited, canvassed and registered boys and girls, men and women at neighborhood gurduaras.

Such an activity could not be arranged without the cooperation of the gurduaras and it was there. Teams of young people visited gurduaras, set up registration booths, talked to visitors and registered them. A modest registration fee and cogently prepared information kit helped. Each competitor was given an attractive specially designed T-shirt to wear at the race, along with a lightweight back pack and some advertising material by sponsors.

The dedication and computer skills of the young managers of the project guaranteed that there were no slip ups or awkward gaps in information. They could keep track of all registrants at any time. Scores of men, women, and young people signed up. Gurduaras arranged ways to bus people to the arena in time. My wife and I were #s 183 and 184. At the race we discovered the count going into the nine hundreds. Every activity from registration to the finish line started and ran on time with all expectations of a class act. Advertisers set up booths and distributed simple goodies to all participants, young or old.

What was even more fascinating to me was the age span of the runners – young as 10, old as 105; that was the legendary Fauja Singh himself, still full of vim and vigor, his tag number was his age and he came especially from the United Kingdom. His interaction with runners was a class act on how to charm the runners – it was real charisma.

Running on the same track in the same one race with over almost 1000 people with an age span of almost 90 years. How do you manage such a diverse group at the same time on the same track in the same race? The young computer experts had electronic timers that captured each runner as he/she crossed the finish line and gave us an exact time. When the time came for awards of recognition it seemed magically easy to separate runners by age, from the youngest not yet in teens, and then by decades etc. Men and women, too, could be segregated and were.

And then the trophies and awards handed by Fauja Singh provided a rare and perhaps once in a lifetime photo-op with him.

A couple of gurduaras, at least in and around New York, have recently started annual sports days but they usually involve young boys and girls in competitions. This day, today, involved men and women, boys and girls, young and old all together at the same time. That, to me, is a revolutionary idea. And this day involved the collaboration of gurduaras and that’s even better.

There is a long list of sponsors that I’ll let go here. I would be remiss if I did not name some of the organizers behind this day: Avtar Singh, a practicing dentist, Satnam Singh Parhar a budding political voice, Gurinder Pal Singh Josan a Black belt Karate shinsei and his daughter, Japleen Kaur. I assure you that this list remains incomplete.

But all this occurred outside the ambit of the gurduaras, though with their full-hearted cooperation. Now for an event that is equally collaborative and occurs within a gurduara embracing its programs and diversity in language and activity that transcends differences in age and culture.

Wouldn’t that be heaven?