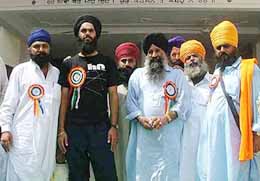 Some of the Sindhi Sehajdharis who joined the Khalsa Panth recently would meet the Jathedar of Akal Takht in Amritsar to seek guidance for maintaining “maryada” in gurdwaras in Pakistan.


Amritsar - While the Sikh leadership in India, especially in Punjab, is worried over rising trend of ‘patitpuna’ (apostate), a large number of [Sindhi Sehajdharis] in Pakistan, have joined the Sikh fold by getting themselves baptised.

[At least 25 per cent ‘Sehajdhari Sikhs’ from the Sindh province have entered the Khalsa Panth, by taking Amrit, in the recent past.]

It sounds unbelievable that persons who introduced themselves as Jawahar Singh, Vijay Singh and Parkash Singh with blowing beards were Jawahar Lal, Vijay Kumar and Om Parkash, respectively, only few months ago. As compared to the Hindus, the Sikhs are considered more safe in Pakistan. Many Pakistani Hindus, who had come to India, in the past had never returned to their country, due to their continuous persecution.

Talking to The Tribune, Mr Vijay Singh said there were more than 15 lakh Hindus in Sindh province itself, who were devout Sehajdhari Sikhs. He said most of the Sindhis could easily read Sri Guru Granth Sahib in ‘Gurmukhi’ script without any problem. Mr Darshan Singh (previous name Darshan Lal) said the ‘Gurmukhi’ was being taught in Hindu temples and Gurdwaras to the younger generation, so that they could remain devout Sikhs.

These temples, schools and Gurdwaras include Baba Hardass Ram School, Gurdwara Nanakwara, Gurdwara Bhai Joga Singh, Guru Arjan Dev Pathshala and Baba Bhoj Ram Temple. Raja, a student of class VII from Dehrki district (Pakistan) said he would be baptised as per the wishes of his parents (Sehajdhari Sikhs) shortly.

Baba Amir Singh and Baba Amarjit Singh from Peshawar said the Pakistani Sikhs got disappointed when they saw ‘patit’ Sikhs accompanying the Indian jathas, who visited Pakistan every year, to pay their obeisance in Gurdwaras there. They said the government of India should not give visas to the ‘patit Sikhs’ to visit Pakistan as their appearance hurt the sentiments of the Sikh Sangat in Pakistan. They said the SGPC (Search) should not recommend the visas at ‘patit Sikhs'.

Baba Amarjit Singh, a Granthi of Gurdwara Joga Singh (Peshawar) said the Sikh pilgrims from Pakistan would like to meet Giani Joginder Singh Vedanti (Search), Jathedar Akal Takht (Search) for seeking his guidance to maintain ‘Maryada’ in gurdwaras of Pakistan.

While the Sikh leadership in India, especially in Punjab, is worried over rising trend of ‘patitpuna’ (apostate), a large number of [Sindhi Sehajdharis] in Pakistan, have joined the Sikh fold by getting themselves baptised.
...
Can some one explain, why is Sikh leaderhsip so worried if folks are converting to Sikhism. ? Are they afraid that it is a political move to destroy the religion ?
D

This problem of Patitpuna has damaged the Sikh future in Punjab so much that there is hardly any Sabat Surat young boy left in villages of Punjab . Almost 98 % of the rural boys have cut their hair . In universities & colleges , hardly one percent Sabat Surat Sikh boy is left . 99 % of the boys r Patit . The Babas & Sants to break the boys from Gurbani encourage this trend by saying Sikhi should be of mind & not of outer looks . The SGPC ' s whole budget of 375 - 400 crores ( 90 - 100 million dollars is spent on politics of Shiromani Akali Dal ( Badal ) & the very Same Prakash Singh Badal is standing with folded hands in front of RSS ( BJP ) waiting for next order . So much so that Gurmukhi ( Punjabi ) has become non- existent in all CBSE (ICSE ) public schools in Punjab . The language of speaking in all schools is Hindi only , no trace of Punjabi / English is there .Young generation of urban Sikh boys & girls can't speak simple sentences in Punjabi as if it is an inferior language .Their language of communication is Hindi only . It is time , Sikhs start looking fora Sikh Political Party which is away from Congress / BJP ( RSS ) as well as serious for the welfare of Sikh faith & Punjabi language & stop this relentless march of Hindi & Patitpuna .