Since the development of the Universe, marriage between the female and male has been in practice for the purpose of living together and usually procreating lawful offspring. The Almighty God has thus created Adam and Eve followed by the growth of human population. Major religions have also enacted their own Laws and Regulations. 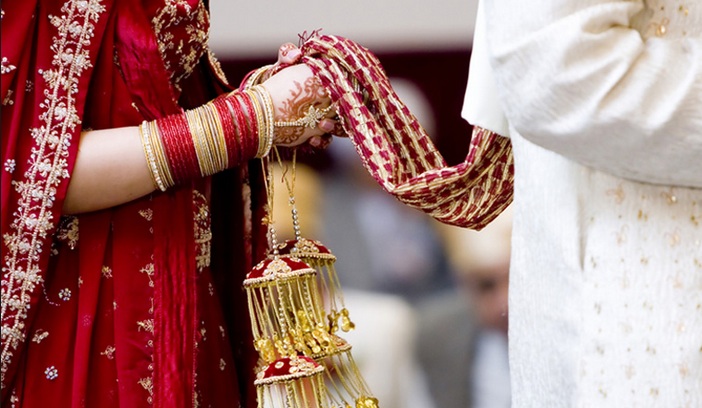 Guru Nanak Sahib had founded and established the Sikh Religion during 1469-1539 A.D.
His successors followed his message with devotion and humility. Like the Christians’ Bible and the Muslims Qur’an, the Sikhs all over the world have been following their Sacred Scripture, which is well known as: “GURU GRANTH SAHIB”. During that period, women were not considered equal with men but Guru Sahib raised his voice:

“O True Devotees, why do we belittle or degrade the householder’s life? At first the child is conceived by the mother and then is born to the mother (a woman); then man gets betrothed and married to a woman; then he develops love for the woman, and consults her in all decisions, regarding children’s marriages and other worldly chores are conducted by consulting her. When one wife dies, he looks around for another woman; in fact the whole world is run with the woman’s attachment or involvement. How could we call a woman inferior or lower in stature to a man, when she gives birth to the Kings, Priests, Prophets and all the human beings? The woman gives birth to another woman, so how could the world progress without the woman? Guru Nanak Sahib opines that there is only one Almighty God, Who is not affected by woman, being above all the human beings. The person, who recites God’s True Naam (Divine Word), is to be considered a really fortunate one. Thus, Guru Nanak Sahib says that such persons leading emancipated life are received in God’s Divine Court with honour. [This Quote is from the Sacred Scripture of the Sikhs: Guru Granth Sahib, page 473]

Then at page 788, Guru Sahib advises us that if two persons are sitting together, they cannot be termed as husband and wife. In fact, when both the souls mingle with each other, then only they could be called the true lovers and beloved ones even though they possess two different human forms but have one soul only for love and procreation. If such natural process is stopped, how there will be any world growth because man & man or woman & woman can’t produce children in the absence of the Female and Male cohabitation?

In the Sikh Scripture at pages 773-74, 872, 989, 1013, 1022, 1289, Guru Sahib cautions us that some persons do not eat fish or meat but they themselves are the product of flesh, from the father’s semen (husband/male/man) and mother’s blood (wife/female/woman). We are also advised that without the parents (mother-female-woman and father-male-man) a child cannot be born:

GGS Page 773-74: O Brother! The person, who has found the sweetness of the True Naam (Divine Word) within the heart, has developed love for God-spouse day and night, just as the wedded woman would do for her spouse.
GGS Page 872: One cannot approach God’s Divine Court without the support of the enlightened devotees, just as without the parents (mother and father) a child cannot be born, or without water the clothes cannot be washed, or a person without a horse cannot be called a good rider.

GGS Page 989: By the union of the mother and father, this human body was created, and then the Almighty God prescribed certain fortune for them, as per God’s Will. The honour and status of a person is predestined by the Almighty God’s Will before their births.

GGS Page 1013: The Almighty God has created the human beings by the combination of the mother’s blood and the father’s semen. When the human being was lying upside down in the mother’s womb, his/her mind was concentrating on God, who had bestowed protective care as Divine Grace.

GGS Page 1022: O God! Your secrets have not been known by the Hindus or Muslims Scriptures. O True Master! You have created all the beings with ease.

GGS Page 1026: The human being is born through the combination of the male sperm and the female blood as well as by the five elements like air, water and fire.

GGS Page 1289: Some persons do not eat fish or meat but they themselves are the product of flesh, from the father’s semen and mother’s blood, and indulge in all sorts of foolish acts during the meeting of husband and wife.

Therefore, marriage is an equal partnership of love and sharing between a husband and a wife. If the husband is the head, the wife is the heart of the family. Both are indispensable for realizing the full moral, social, spiritual, and intellectual potential. Hence, the Sikhs do not believe in celibacy, but love to lead the Householder life with wife and children.

During the British Rule in India, The Anand Marriage Act was enacted in 1909 for conducting the Sikh Marriages. The Sikh Matrimonial Ceremony has also been described in the Sikh Code of Conduct, which reads –

(a) A Sikh man and woman should enter wedlock without giving thought to the prospective spouse’s caste and creed.
(b) A Sikh’s daughter must be married to a Sikh, so it also applies to a Sikh’s son.
(c) A Sikh’s marriage should be solemnized by following the Anand Marriage rites.
(d) Child marriage is a taboo for the Sikhs.
(e) When a girl becomes marriageable, physically, emotionally and by virtue of maturity of character, suitable Sikh match should be found and she be married to him according to The Anand Marriage rites.

Although the Sikhs have been living in harmony and peace together with other communities, we do not agree with legal change in the Marriage Act. Accordingly, we request The Hon’ble Governor General, Chief Justice & other Judges, Prime Minister, Cabinet Ministers, Members of Parliament and the Senators that they should desist from this venture simply for the sake of a few votes or merely to appease some vocal vagabonds, who have no respect for other communities. Such persons should be requested to consult Psychiatrists and then they themselves should come forward to share the Truth that they themselves were also born out of union with their loved parents i.e. mother and father? [This aspect is even well known to the animals]

If possible, please prevail upon the known MPs’ and Senators to insert this as an Advertisement in the Daily Newspapers so that public knows that the Sikh Community is absolutely against this change. Alternatively, copies may be passed on to all the Legislators.

Pray to God for the growth of humanity under the Divine Law of Nature.

Totally disagree with this statement. The biggest load of homophobic tripe I have read.

The soul is genderless. Anand Karaj is a Union of souls, therefore the outside shell does not matter.

If such natural process is stopped, how there will be any world growth because man & man or woman & woman can’t produce children in the absence of the Female and Male cohabitation?
Click to expand...

Well world growth is already out of hand

The Almighty God has thus created Adam and Eve followed by the growth of human population.
Click to expand...

Since when do Sikhs accept the biblical myth of Adam and Eve? And why should I spend my precious time reading an article by a person who can't tell Sikhi from the Abrahamic faiths?