Sikhs host a pop-up lunch for people of all faiths at Salt Lake convention. The Parliament of the World's Religions, which was held in Utah last week, saw people from many religions gather under one roof. The five-day event also saw hospitality at its very best, as a Sikh organization from the U.K. by the name of Nishkam Center worked with volunteers to offer free food to all 7,000 participants. 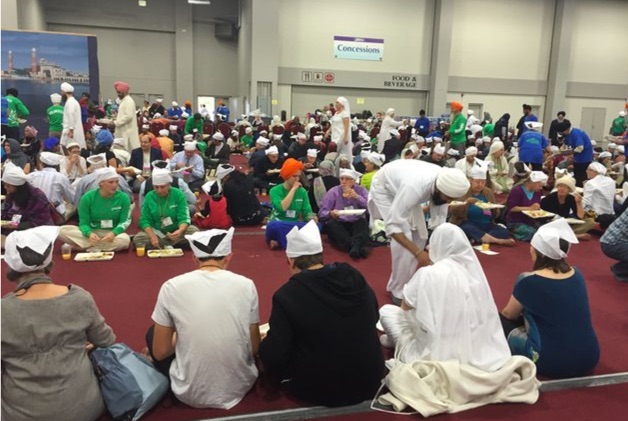 Langar is a common tradition in the Sikh community, where people of all faith and statures are served food in an act that signifies equality and sharing among humanity. In fact this is why the tradition requires for all the guests to sit on the floor, as it implies that everyone is being treated as equals. As per the Langar tradition, the guests are served by volunteers, which many attendees found touching. One of the participants at the conference said that he felt a rush of gratitude toward the volunteers when they eagerly served him. Another visitor was equally touched by the kind gesture, and said that it nearly brought her to tears. Langar is regularly observed by Sikhs in temples. However, the one organized at Parliament of the World's Religions was catering to visitors of a far greater magnitude. The visitors were directed to the dining room when they came in, and they were offered a white bandana to wear over their heads. The action is symbolic of respect to the food that is being served. Los Angeles, CA Sikh, Sarbjit Singh with Khalsa Care Foundation spoke of Sikh fundamentals “Sharing and caring, those are the two keys. Every Sikh must do it with everyone, not just each other. We're all children of God."

The visitors where then seated on the carpeted area in the room. The volunteers served food to thousands upon thousands of people, and in multiple rounds until they ate till their heart's fill. The word “Incredible” came from Jen Bernstein a Parliament participant as she sat down to eat with so many people of different beliefs. They were served with salad, rice, raita, vegetable curry, naan, banana and apple on a plate, with mango lassi and water.

Trucks carrying food have been making their way in and out of the Salt Palace Convention Center since last week. The food has been prepped in Salt Lake County's Sikh temples. Some of the cooking was also done at the convention center. Volunteers worked with great zest to spin out over 4,000 naans, an Indian flatbread, and cook rice at the center, alongside preparing coffee and tea as well. The volunteers included Sikhs who had flown in from around the country and worldwide, as well as locals of different faiths.

That is amazing that even in times of austerity guru nanaks Langar by waheguru ki kirpa is still able to feed event's globally by one mans sacrifice the entire world symbolises the strength that one man's words can make upon the world however big the world is guru nanaks contribution stands out immensely. Throughout time an history a real legacy.
Share:
Facebook Twitter Reddit Pinterest Tumblr WhatsApp Email Share Link