If you're on the Millsaps campus on Monday, you might run into Captain America.

He probably won't look like the superhero you're used to seeing, though. While this Captain America is wearing a turban and a beard, he is the first to tell you he's no less American than Chris Evans' character in the "Avengers."

Vishavjit Singh is a Sikh cartoonist who has set out to fight the injustice of racial bias. Singh spoke to a group of Millsaps students on Sunday night, asking them to write on cards the words that came to their minds when they looked at him. 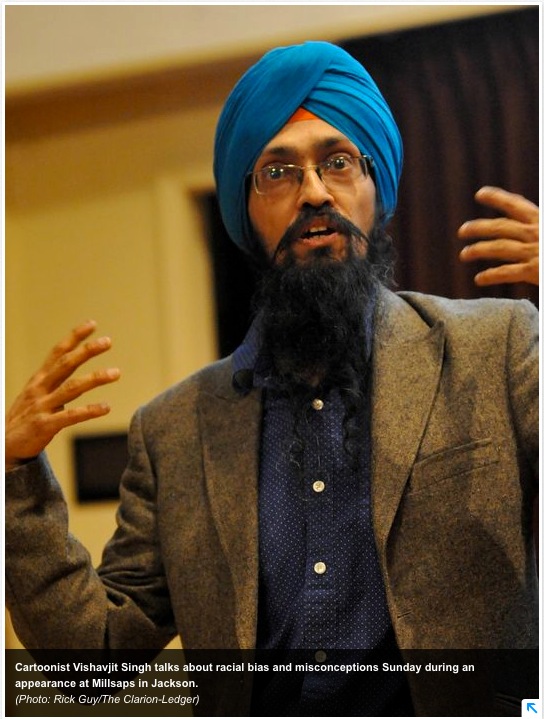 "I've almost never had anyone say, 'American,' " Singh said. "We have this symbolic association of a permanent beard as being not America. That's part of the reason I do what I do."

Singh talked to the group about how he found his Sikh roots while he was living with his brother in New York in August of 2001, one month before 9/11. A lot of Sikhs chose not to wear their turbans and beards in the aftermath of the terrorist act, as many people took retaliatory action toward anyone who looked Arabic.

"It never crossed my mind not to wear my turban, because I had fallen in love with this faith," he said.

Singh said he found a way to start to combat the bias against people of his religion when he saw a cartoon that he felt described the plight of the Sikhs in a world that believes everyone in a turban and a beard is a terrorist. He knew that cartoonist might never do another one, but he decided he could. He built a portfolio of cartoons that ranged from cartoon newspapers to a Sikh Spongebob to a Sikh replica of "The Scream" by Edvard Munch.

When he took his cartoons to to a comic convention one year, a photographer encouraged him to wear a Captain America costume the next year. He wasn't keen on the idea initially, but he ended up doing it, and the rest is history.

Singh said he gets all sorts of feedback from people when he wears his uniform, but most of it is positive.

And he has found one group that consistently doesn't discriminate.

Instead, he said, they ask him about his beard and they tell him the "real" Captain America has muscles. But they never feel like he shouldn't portray the superhero because he's not white.

Singh said he hopes to take his message to all 50 states. So far he has been to four, he said.

The last cartoon he showed the group was in the shape of a Sikh man with a turban and a beard, and in the silhouette was the Robert Louis Stevenson quote, "Keep your fears to yourself but share your courage with others."

"If only we could all live by this simple statement," he said.