The Sikh tradition has long been at the forefront of social innovation. The Institute of Texan Cultures, a unit of the University of Texas at San Antonio, is hosting an exhibition titled ‘Sikhs: Legacy of the Punjab’. More than 100 pieces of Sikh artwork and artifacts are on display at the exhibition, which will remain open till January 3 next year.

The idea of holding an exhibition about the Sikh community came to Gurvinder Pal Singh (an entrepreneur and Sikh community leader in San Antonio), post an instance of shooting in a Sikh Gurdwara, after which he approached the institute in October 2012. The dire urge to educate people about this community made him take this step. 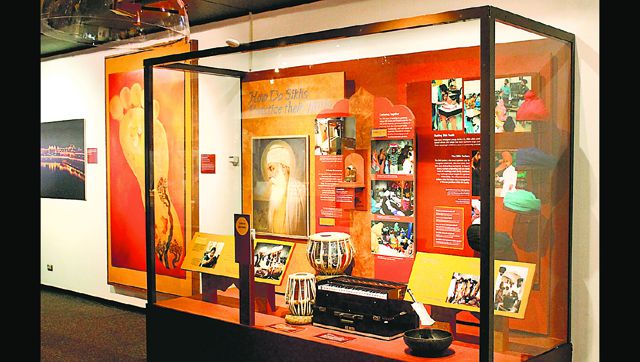 Developed by Smithsonian Institution and sponsored by the Sikh Heritage Foundation, the exhibition presents paintings; arms and armor; traditional textiles and dress; musical instruments; jewellery; sacred texts; and modern works of art, apart from a scale model of the Golden Temple.

“The bulk of the exhibit originated at the Smithsonian Institution, with whom we’re an affiliate.

That part of the exhibition covers Sikhism in general. We added three small sections, one of which depicts the story of Sikhs in early Texas. Most of them intermarried with Mexican or Mexican-Americans, and developed a unique cultural blend around El Paso, Texas. We also added material about the Sikh military legacy. San Antonio has a sizable military presence, so we felt this was appropriate. Along with covering Sikh contributions to world history, including their role in World Wars I and II, we cover Sikhs in the US Armed Forces, including issues surrounding permission to retain their articles of faith in uniform, which has recently resurfaced here in the US,” shared Bryan Howard, director of Research, Exhibits, & Collections at the institute.

On the other hand, senior religion fellow for The Sikh Coalition, Simran Jeet Singh, revealed that a number of important artifacts on display, from coins of the Sikh Raj to paintings and sculptures by prominent Sikh artists. “The exhibit also highlights the Gadar movement for India's independence and contributions made by Sikhs have to the US military,” Singh added.

In fact, many of the objects on display are on loan from private collections and were used for public display for the first time when the exhibition opened in 2004 at the Smithsonian Institution. “In each subsequent venue, there have been local variations and additions, including the present venue at the University of Texas. This venue includes a section on the history of Sikhs in Texas; a Texan family’s heirloom phulkari (shawl) textile,” said Paul Michael Taylor, director of the Smithsonian Institution's Asian Cultural History Program and Curator of the Sikh Heritage Project.

Activities during the exhibition

Talking of activities which have been arranged especially for the exhibition aimed at spreading awareness about the Sikh diaspora, Taylor shared, “There are many activities planned in San Antonio during this exhibition which include family festivals, performances, and other events. Other cities have also been pitching in so as to be the subsequent venues for the exhibition, though no decision has been taken in this regard.”

“Students from local schools will be visiting the exhibit everyday, and we will have special programs to get more local communities to learn about Sikhism,” added Simran Jeet.