The 56-year-old man who was shot and killed at a north-side neighborhood market was fatally wounded Wednesday night in what police said Thursday appeared to be an attempted robbery.

Dalbir Singh was killed about 9:10 p.m. Wednesday, shortly after the Harmony food store at 3821 W. Locust St. closed, said Jatinder Singh, who owns the store and is Dalbir Singh's nephew.

Jatinder Singh said he and his uncle had exited the store through a side door when a couple of men approached them and one put a gun to Jatinder Singh's head.

Jatinder Singh said he and his uncle made it back into the store and pushed the side door shut.

But one of the men fired a shot through the door, killing Dalbir Singh.

Milwaukee police said they are searching for suspects.

The Singhs are members of the Sikh Temple of Wisconsin in Oak Creek, where a gunman opened fire on Aug. 5, killing six worshippers and injuring four people, including a police officer. The gunman, Wade Michael Page, shot and killed himself after an Oak Creek police officer wounded Page in the parking lot of the temple at 7512 S. Howell Ave.

Jatinder Singh said he was at the temple on Aug. 5 but had left by 9 a.m. The shooting rampage began about 10:25 a.m. that day.

Jatinder Singh said his uncle also was not at the temple during the shooting, but that Dalbir Singh went to where people were gathering near the temple after he learned of the shooting.

So much sorrow and violence. Prayers for all.

O Divine Master, grant that I may not so much seek
to be consoled as to console;
to be understood as to understand;
to be loved as to love.

Suspect Found and to be Charged in Dalbir Singh Murder Case
By: The Sikh Coalition 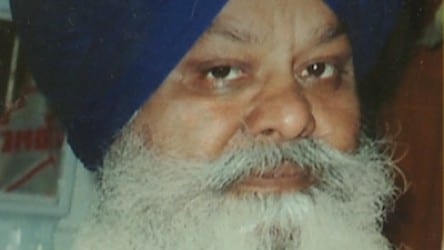 The Sikh Coalition has been in touch with the Milwaukee District Attorney since the incident. This afternoon the DA’s office was able to to share that a suspect is in custody and will be charged with a homicide crime. Thus far, the DA’s office has no evidence of any bias motivation and is treating the circumstances of the crime as an armed robbery. Charging documents will be made available when they are filed.