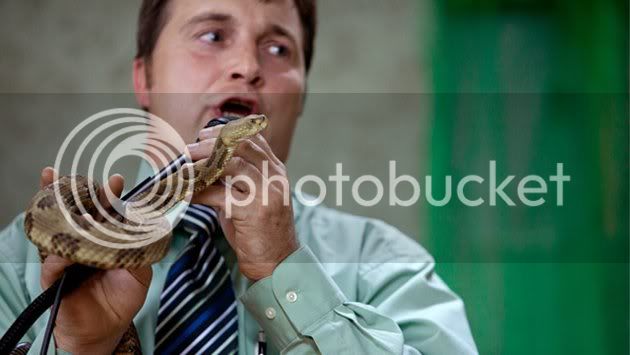 A "serpent-handling" West Virginia pastor died after his rattlesnake bit him during a church ritual, just as the man had apparently watched a snake kill his father years before.

Pentecostal pastor Mark Wolford, 44, hosted an outdoor service at the Panther Wildlife Management Area in West Virginia Sunday, which he touted on his Facebook page prior to the event.

"I am looking for a great time this Sunday," Wolford wrote May 22, <a href="http://www.washingtonpost.com/lifestyle/style/serpent-handling-pastor-profiled-earlier-in-washington-post-dies-from-rattlesnake-bite/2012/05/29/gJQAJef5zU_story.html" target="_blank">according to the Washington Post. "It is going to be a homecoming like the old days. Good 'ole raised in the holler or mountain ridge running, Holy Ghost-filled speaking-in-tongues sign believers."

Robin Vanover, Wolford's sister, told the Washington Post that 30 minutes into the outdoor service, Wolford passed around a poisonous timber rattlesnake, which eventually bit him.

"He laid it on the ground," Vanover said in the interview, "and he sat down next to the snake, and it bit him on the thigh."

Vanover said Wolford was then transported to a family member's home in Bluefield about 80 miles away to recover. But as the situation worsened, he was taken to a hospital where he later died.

Jim Shires, owner of the Cravens-Shires Funeral Home in Bluefield, told ABC News that Wolford died Monday. Wolford's church, the Apostolic House of the Lord Jesus in Matoaka, will host a viewing Friday and a funeral service Saturday morning. Wolford will be buried at the Hicks Family Plot in Phelps, Ky.

Officials at the Panther Wildlife Management Area had been unaware of Sunday's event until they were notified by callers after the service.

"We did not know that this event was happening, and if we had known about it or if we had been asked for permission, permission would not have been granted," Hoy Murphy, public information officer for the West Virginia Division of Natural Resources, told ABC News.

While snake-handling is legal in West Virginia, other Appalachian states, including Kentucky and Tennessee, have banned the practice in public spaces.

Snake-handlers point to scripture as evidence that God calls them to engage in such a practice to show their faith in him. Mark 16: 17-18 reads, "And these signs shall follow them that believe: In my name shall they cast out devils; they shall speak with new tongues. They shall take up serpents; and if they drink any deadly thing, it shall not hurt them; they shall lay hands on the sick, and they shall recover."

Wolford told the <a href="http://www.washingtonpost.com/lifestyle/magazine/in-wva-snake-handling-is-still-considered-a-sign-of-faith/2011/10/18/gIQAmiqL9M_story.html" target="_blank">Washington Post magazine in 2011 that he is carrying on the tradition of his ancestors by engaging in snake handling.

"Anybody can do it that believes it," Wolford said. "Jesus said, 'These signs shall follow them which believe.' This is a sign to show people that God has the power."

Wolford said watched his own father die at the age of 39 after a rattlesnake bit him during a similar service.

"He lived 101/2 hours," Wolford told the Washington Post Magazine. "When he got bit, he said he wanted to die in the church. Three hours after he was bitten, his kidneys shut down. After a while, your heart stops. I hated to see him go, but he died for what he believed in.

"I know it's real; it is the power of God," Wolford told the Washington Post Magazine last year. "If I didn't do it, if I'd never gotten back involved, it'd be the same as denying the power and saying it was not real."

And why take him to family member's place to recover? Why not to emergency!

Kanwaljit Singh said:
And why take him to family member's place to recover? Why not to emergency!
Click to expand...

Kanwaljit Singh ji this is obviously a tragic incident.

I believe some people take chances while ignoring the faculty of Brain/thinking that they forget to exercise. They forget it is also God/Creator's power and message for one to be so using these. As Gyani ji pointed out Consonance acts as attributed in each and everyone. If we ignore attributes we do it at our own peril. Some, sometimes survive and these get classified as purported miracles. It really should behoove on all that challenging consonance is not smart. So snake cannot dialog with you. It knows to get away or fight. It cannot get away it will do what comes naturally? In this case a fight action, bite. Snakes or other animals don't pretend unless there is love in the relationship. So all their actions of defensive or offensive nature are to the best of their abilities. Fastest flight and maximum injection of venom in a bite.

I did not post it to poke at anyone but this is also mentioned in different ways by people in Sikhism as "Hukam"/creator's action. Hukam really is a much higher action where things beyond our own faculties and attributes given to us by the creator show up in our life and specially for actions of type negative to us at a personal level. We cannot find explanations so we have a choice to find peace through acceptance or not. Usually the acceptance is a better choice and this is in the assignment of God/Creator's name in humility and unwavering love regardless.

Kanwaljit Singh said:
And why take him to family member's place to recover? Why not to emergency!
Click to expand...