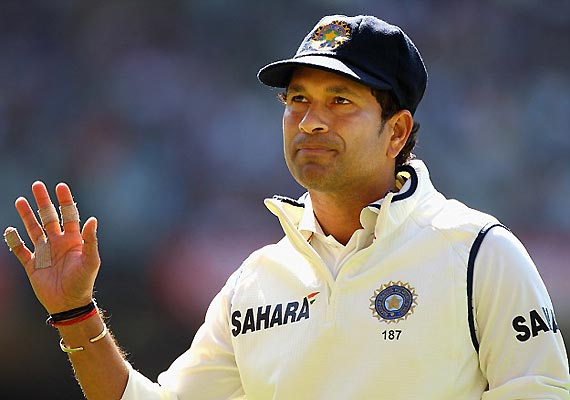 {censored}hede Stadium, Mumbai: Grace, poise, a fabulous sense of timing, the occasional display of delightful impishness and above all, sheer class, have long been the hallmarks of Sachin Tendulkar, the batsman. On an unforgettable Saturday, they marked Sachin Tendulkar, the speaker. In an emotional farewell speech that moved a rapt audience -- in the stadium and around the world -- to tears, Tendulkar revealed the special human beneath the legendary cricketer, and made adoring fans fall in love with him all over again.


India had won the match by an innings and 126 runs, and the series 2-0, but that was reduced to a mere footnote. Pragyan Ojha picked up the man of the match award for his 10-wicket haul - and was lustily cheered for dedicating his award to Sachin. The loudest applause through the awards ceremony was reserved for Ravi Shastri, for handing over the mike to Tendulkar and saying, "It's all yours."

Sachin had carried along a list to ensure he didn't forget anyone, but he referred to it only occasionally. Mostly, he spoke extempore and straight from the heart. He began in a choked voice, pleading with the delirious crowd that had stayed on its feet through the presentation ceremony to settle down and let him speak. As the audience quietened somewhat, he composed himself and said, "My life, between 22 yards for 24 years, it is hard to believe that this wonderful journey has come to an end."

He thanked his father. "The most important person in my life, and I have missed him a lot since 1999 when he passed away. He gave me freedom at the age of 11, and told me, 'Chase your dreams, but do not take short cuts. The path might be difficult, but don't give up'. He told me to be a nice human being, which I will try my best to always do. Every time I have done something special and showed my bat, it was for my father."

He spoke fondly of his mother. "I don't know how she dealt with a naughty child like me... She started praying for me the day I started playing cricket. She just prayed and prayed and I think her prayers and blessings have given me the strength to go out and perform."

He mentioned his uncle and aunt, with whom he stayed for four years because his school was far from home. "I am like their son and I am glad it has continued to be the same way." He thanked his eldest brother, Nitin and his family, for their encouragement, and his sister Savita, who gifted him his first cricket bat and has fasted for him every time he has batted.

There was a special word of thanks for his brother, Ajit. "We have lived this dream together. He sacrificed his career for my cricket. He spotted the spark in me. And it all started from the age of 11 when he took me to Achrekar sir, my coach, and from there on my life changed."

He smiled as he spoke of how "the most beautiful thing happened to me in 1990 when I met my wife, Anjali." The crowd responded by cheering and indulging in some good-natured whistling. Then he spoke emotionally of how Anjali sacrificed her career as a doctor so that she could take the responsibility of the family. "Without that, I don't think I would have been able to play cricket freely and without stress... You are the best partnership I've had in my life." By now, the tears were flowing from Anjali's eyes. Daughter Sara reached across to give her a comforting hug and kiss.

Sachin spoke wistfully of his "precious diamonds" Sara and Arjun. "My daughter is 16, my son is 14. I wanted to spend so much time with them on special occasions but I missed out on all those things." He thanked them for understanding his absence and promised, "I have not spent enough time with both of you, but the next 16 years or even beyond that, everything is for you."

The boyish streak in him surfaced as he spoke of his delight that his coach, Ramakant Achrekar, had finally come to watch him play in a stadium. "In the last 29 years, Sir has never ever said 'well played' to me because he thought I would get complacent and stop working hard. Maybe he can push his luck now and say 'well done' on my career, because there are no more matches, sir, in my life."

He repeated the message that he had given to the Indian team when skipper M S Dhoni presented him the special cap for his 200th Test. "All of us are so, so fortunate and proud to be part of the Indian cricket team... I know you will continue to serve the nation with the right spirit and right values." At a time when a probe is underway into allegations of fixing, the simple statement spoke volumes.

As he neared the end of his 20-minnute speech, he said, "I know it is getting a bit too long." The crowd roared back "noooooooooo". They could quite happily have heard him go on for hours. But Sachin wrapped it up briskly. "I want to thank all the people here who have flown in from various parts of the world, and have supported me endlessly...Time has flown by rather quickly, but the memories you have left with me will always be with me forever and ever, especially 'Sachin, Sachin' which will reverberate in my ears till I stop breathing."

The crowd promptly launched into a full-throated rendition of "Saaachin, Sachin" even as Tendulkar's voice broke on "Goodbye". There was a brief conference on the field, possibly about whether or not he should do a lap of honour. But for the crowd, there was no question about it. They weren't going to budge till he went around the stadium once.

And so, Tendulkar took a tricolour in his hands and began his perambulation. Halfway through, he was hoisted on the shoulders of captain M S Dhoni and vice-captain Virat Kohli. Kohli was barely a year old when Sachin made his debut. Dhoni, on whom the mantle of the team's senior statesman now falls, made his Test debut in 2005, by which time Sachin had been playing for almost 16 years. As the procession slowly wound its way around the field, the crowd roared ho{censored}ly but full-throatedly, clapped, thumped chairs and boards, stomped feet and smiled through copious tears. A lady abandoned futile attempts to salvage her make-up, and cheerfully wept into her handkerchief.

Earlier, after the last wicket had fallen, the team had rushed to form a guard of honour as Sachin walked off with a stump in his hand, wiping away a tear. Then, an extraordinary thing happened. The players standing towards the end of the guard rushed towards the beginning, in a sort of leapfrog move that was repeated again and again, so that Sachin had a mobile guard of honour right till the boundary line. It was, quite literally, a moving send-off.

But even that wasn't the most touching sight of the day. That came right at the end, after all the commemorations were over. Sachin walked back to the pitch, absolutely alone, lost in his own world. He bent and touched the turf, then brought his fingers to his heart and forehead.

You'd have thought people in the audience would have run out of tears by then, but they managed to tap into a fresh reservoir and bawled their hearts out. They continued chanting for the master till long after he'd walked back into the dressing room, reluctant to break the magical spell and return to mundane reality. Then suddenly, there was a scramble to wave goodbye to the departing team bus.