Opinion Questions That Unbalance Me: Exploring Sikh Womanhood Through Sculpture


Research title: Questions that unbalance me: exploring Sikh womanhood through sculpture.​
I am an artist, poet, researcher, teacher and academic. I am studying a Masters in Research and am looking at the issues surrounding the birth and attitude towards girls in South Asian communities who members call themselves Sikhs.

The fields in which my studies are situated are South Asian women studies and Visual Art practice. The place of women in Sikh South Asian Culture is a controversial issue. Kaur Singh (1993) argues that the Sikh philosophy both uplifts and empowers women. However, Kaur Singh (1993, p.1) describes the paradoxical nature of society in India, where on one hand woman are ‘exalted’ to ‘Prime ministership’ and on the other hand ‘downgraded’ and ‘murdered with impunity for her dowry’. There are few academic books and articles written specifically about gender bias in Sikh culture. Singh (1996, pp.125-26) writes, ‘Sikhs are well aware of the gender bias, ill treatment of women and the practice of female feticide within their community, and many of them are speaking out against it. This problem is headlined and editorialized in Sikh publications’. Singh (1996) further adds that research is needed into the reasons for gender bias in Sikh communities as it opposes Sikh scripture. Gender bias is an important issue and affects many female Sikhs; including females I have grown up with, know today and myself. The lived realities of Sikh girls and women are not talked about out loud.

Initially I set out to look at the unsung stories of Sikh women through history and highlight ‘herstory’. However, my research has uncovered an already growing expression of ‘herstory’, for example, the ‘Great Sikh Women’ 2012 calendar. Many contemporary artists, in order to promote the idea that Sikhism is egalitarian in its philosophy and to re-establish the balance of Sikh visual imagery, depict the involvement of women in the history of Sikhism. Examples are artists like Kawan Singh (2007) who painted ‘Mai Bhago and the forty liberated ones’. In addition, as in this example, the main aim of most female visual representations is to promote the side of Sikhism that states women and men are equal. Empowering? Yes. Very little visual imagery explores the paradoxes, contradictions and complexities of the place of women in South Asian Sikh culture from the lived experiences of women. Purewal (2010, p. ix) states in relation to academic discourse around son preference ‘it ignores the more sinister, mundane expressions of son preference that exist within people’s everyday lived realities, the images that are transmitted and the gendered values, expectations and aspirations that circulate in society’. Purewal (2010) (who is from a Sikh community) writes of the negative responses she got from the community when her daughters were born. Such comments are very similar to the ones, which I grew up with. People would say, ‘Kuri hoei? (it’s a girl?), ‘Koi gal nain’ (never-mind) and ‘I’ll pray next time you have a son’. There is a lack of representations that explore these every day experiences in a socio-political context. My research works with the proposition that questioning the experiences of Sikh women through visual art would allow for a more holistic depiction of what is happening in Punjabi communities whose members include Sikhs.

In the conference Imperialism and South Asia (The South Asian People's Unity Forum), Wilson (2009) explains certain terminology for those she says ‘who perhaps are not intellectuals’ or are not fortunate enough to ‘be able to read a lot of books’. Not everyone is an academic and knows how to access academic writings and research. Imagery can be more accessible and communicative. Ivan Turgenev (cited in Mieder, 2004, p. 79) wrote, ‘A picture shows me at a glance what it takes dozens of pages of a book to expound’. The current term used is of course, “a picture speaks a thousand words”. Although personal written accounts are vital, visual representation can invoke discussion and explore an issue from a new angle. And perhaps those who are not academics, in the Sikh community, who may form part of an audience, can use the art as a vehicle to reflect and create conversation around the issues of son bias. 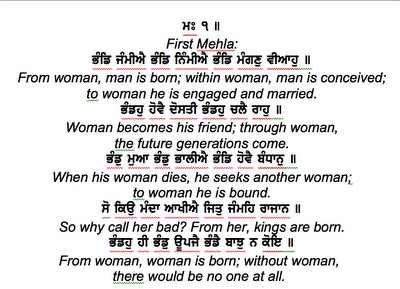 (Guru Nanak Dev Ji – Siri Guru Granth Sahib Ji: Raag Aasaa Mehal 1, Ang 473: Sikhi To The Max)​
​
Guru Nanak Dev Ji, the first Guru of the Sikhs spoke these words. They are well known and were very bold for the time and place in India, where often a woman’s place was ‘at the bottom of a shoe’.

​
Growing up with the philosophy of Sikhi, I held it in high regard. I am a feminist and the 10 Guru’s of the Sikh faith are often viewed as such. However what un-nerved me, was the way in which girls, women, boys and men in my South Asian Sikh community and the wider Sikh community did not embody or were not able to embody this philosophy. Of course there were some beings who did and who do in fact embrace it. I am just speaking of those who did not and do not. There was (and still is) a lot of male bias. When I was young I looked at images on the walls of Sikh Gudwara, there were more images of men than women. This is still the case today. Although there are some Gudwaras which have started to put images of women from Sikh ‘herstory’ up. Also when talks or Sikh camps happen in Gudwaras, there are usually more male speakers and sometimes no female representative. The PowerPoints or presentations made often contain no female references. Plus there are many quotes from the Siri Guru Granth Sahib Ji that exalts women and again theses are not discussed in detail. There are many female Sikh role models to use as examples in talks and conferences. A list of influential Sikh women is shown below. This list is only a small sample of women, but there many more.​
​
Bebe Nanaki, Bibi Amro Ji Bibi Anup Kaur Ji, Bibi Agya Kaur Ji, Bibi Baghel Kaur, Ji Bibi Balbir Kaur Ji Bibi Basant Lata Ji, Bibi Bhagbhuri Ji, Bibi Bhani Ji Bibi Dalair Kaur Ji, Bibi Deep Kaur Ji, Bibi Dharam Kaur Ji, Bibi Harnam Kaur Ji, Bibi Harsarn Kaur Ji Bibi Kaulan Kaur Ji, Bibi Khem Kaur Ji, Bibi Nirbhai Kaur Ji, Bibi Prem Kaur Ji, Bibi Rajinder Kaur Ji, Bibi Rajni Ji, Bibi Ranjit Kaur Ji, Bibi Sahib Kaur Ji Bibi Samsher Kaur Ji, Bibi Shushil Kaur Ji, Bibi Viro Ji, Mai Kishan Kaur Ji, Mai Bhago Ji, Mai Kabul Wali Ji, Mata Gujri Ji, Mata Sundri Ji, Mata Khivi Ji, Mata Suhag Bai Ji, Mata Sulakhni Ji Mata Sundri Ji, Mata Tripta Ji, Rani Sada Kaur Ji, Rani Jindian Ji, Bibi Amrit Pritam,, Dr Inderjit Kaur, Bibi Prakash Kaur, Bibi Amrit Singh, Dr Anatkali Kaur Honoryar.​
(Sikhchic, 2012/The Sikh Directory, 2010)

​
It is awful that people in India and the UK go to the extent of killing their daughters before or after birth, in the pursuit of wanting sons.​
​
​ 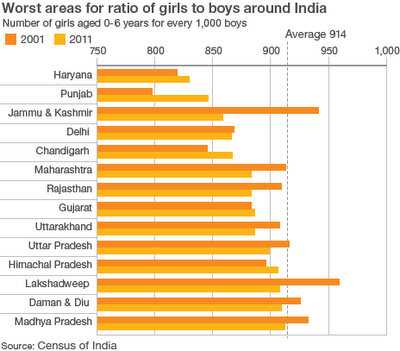 ​
This graph shows the worst areas of girl to boy ratio in different places around India (Pandey, 2011). The Punjab, where the majority of Sikhs are based has one of the worst figures, although there has been an improvement in the male to female ratio between the years 2001 to 2011. Although further research needs to be done to clarify the exact number of feticides/infanticides carried out by members of Sikh communities. The graph below shows the over all decline of girls aged 0-6 in India from 1961. See how the ratio of girls to boys is desperately low in 2011.​ 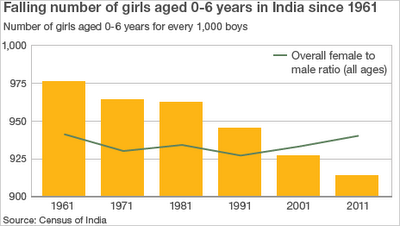 ​
In Amir Khan’s show Satyamev Jayate – Female Foeticide - aired on the 6th of May 2012, the brutality and consequences of female feticide and infanticide are systematically described. Examples are:

My research works with the premise that art steeped in self-expression, can resonate more universal and collective experiences. Adorno (2004, p. 173) eloquently discusses the interrelatedness of ‘I’ and the collective spirit of the aesthetics of images, stating that when ‘artwork far surpasses the mere subject’ it is ‘the eruption of the subject’s collective essence’. Polanyi (cited in Smith, 2003) believed that creative acts – especially those of discovery, are full of strong personal feelings. He argued that such exploration is charged with knowledge and truth, which should be on a par with knowledge associated in the field of science.

My work deals with my personal encounters of son preference in the Sikh community as well as subtly dealing with the accounts of others. The hope is if I share my story visually, maybe others will feel they can share theirs, plus I hope the work becomes a catalyst to create conversations and add to the present discussions in this field to help influence change both nationally and internationally.

I hope you can support and view my work when it is shown.