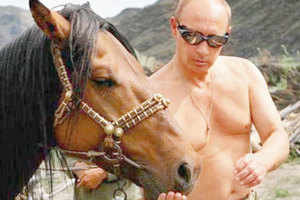 He holds a black belt in judo, chases whales in stormy waters, tags tigers, flies bomber jets and swims in the icy rivers of Siberia.

Or you find him camping out in the wild, riding, shooting and basically doing all things macho – all the while flaunting his flawless-at-58-bare chest. For, during his eight years as president and the past two as prime minister, Vladimir Putin has strongly controlled the image people get of their premier – that of a strong, aggressive, and, well, hot leader.

Is it any surprise then, that after his 'exploits' are widely publicised on national TV, the rugged Russian hero is loved by his people, especially women? The country's most eligible stud may be all set to marry a 24-year-old gymnast, but his popularity with the ladies would put movie stars to shame. On his 58th birthday on Thursday, journalism students from Moscow State University posed in sexy underwear for a calendar titled "Vladimir Vladimirovich, we love you. Happy Birthday Mr Putin", with saucy slogans like, "You put out the forest fires, but I'm still burning." Putin's subjects display their love for him from time to time – in 2008, designer Antonina Shapovalova crafted a line of girls' thong knickers with the slogan "Vova, I'm with you"!

What admiration. The ex-KGB spy has successfully carved out an image of a new-age czar – macho and omnipotent, Russia's saviour in the 21st century. And this masculinity never takes a break. In 2007, the world got a bird's eye view of his vacation in Russia's Altai region, as the dashing PM went fishing wearing only combat trousers, a camouflage hat, army-style boots, and of course, his trademark swagger, an image which became so iconic that Putin-gone-fishing dolls became a rage in Russia. In 2009, his holiday in the hostile environs of Siberia showed him riding horses and doing the butterfly stroke in an icy river; while earlier this year, he went whale chasing in the frigid and choppy waters off the Kamchatka Peninsula. Asked if this feat was dangerous, he replied, "Living in general is dangerous." And when wildfires were ravaging vast swathes of his country, he flew firefighting planes to put out fires and help his compatriots.

On the other hand, a certain Mr Obama has always had a very family-guy image, hasn't he? Despite his good looks and famed torso, he's barely playing up his machismo – even coming under criticism for wearing shabby baggy jeans once. Now, if there were to be another cold war, we all know who's going to win in the popularity stakes this time, don't we?

LOL - For those wondering...or those who are not wondering. The very image, archetype, iconic representation of the ultra male in the US at this moment is this pic of Putin which Kanwardeep Singh ji has kindly offered. This is the current male ideal: A Russian man just like Putin. Men in the US over 40 either don't know it yet, or are wondering when and how it happened.

I however will stick with the image of husbandji. Here he is in diving-gear. I don't have a pic of him where he is not clowning around.

Putin kinda turns me off.


spnadmin said:
LOL - For those wondering...or those who are not wondering. The very image, archetype, iconic representation of the ultra male in the US at this moment is this pic of Putin which Kanwardeep Singh ji has kindly offered. This is the current male ideal: A Russian man just like Putin. Men in the US over 40 either don't know it yet, or are wondering when and how it happened.
Click to expand...


Kanwardeep Singh said:
Do american men over 40 like putin dump their old wives/Gfs and go for some 20 year old hot girl or majority them Remain faithful to their old partners
Click to expand...

Many do here in the US. Not too long ago it had even become a kind of sick "cultural joke" to talk about Mr. So and So who had divorced his wife for what is called a "trophy bride." Social occasions would be moments of opportunity to show her off.

And it is tempting to think that this happens only among the very rich and famous. That is not true. It is a practice that reaches down to the middle of the middle class, where men who own car dealerships or small factories also look for young brides once they have "made it." I would guess the majority do remain faithful. But our divorce rate is high. How to report an accurate percentage I cannot say.