A prominent Sikh Second World War veteran who fought for his right to wear turban in a Royal Canadian Legion branch in Surrey has passed away at the age of 95.

Retired lieutenant-colonel Pritam Singh Jauhal not only stood for the religious rights of his own community, but also against the previous Conservative government's discrimination against Muslim women who wore the niqab (veil) 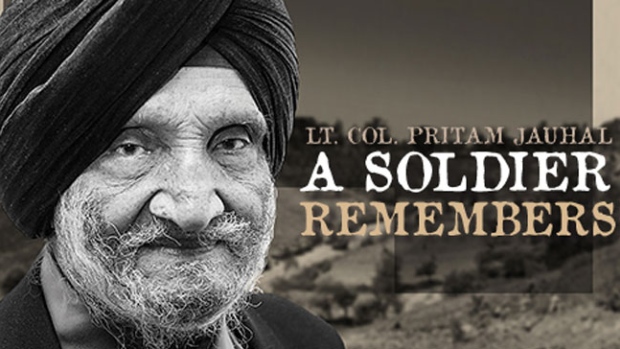 Lt.-Col. Pritam Singh Jouhal as pictured on the cover of his 2013 memoir. Jouhal passed away in Surrey at age 95 this past weekend. (Centre for Indo-Canadian Studies, University of the Fraser Valley)

Jauhal shot to prominence in 1993 when he was prohibited from entering the Newton Legion on Remembrance Day. At the time, the establishment wouldn't allow turbaned Sikh veterans on the premises.

Legion officials insisted that Jauhal and other Sikh veterans who had served the British Empire in the Second World War could only come in after removing their turban as rules forbade veterans from wearing headgear.

This was despite the fact that female veterans from England were allowed to go in wearing their berets.

Jauhal wrote a letter of protest letter to the Newton Legion detailing the sacrifices made by South Asian soldiers during Second World War in a bloody fight against the Nazis. He also wrote to the Queen of England, who is the constitutional head of Canada.

Following the support Jauhal received from mainstream allies, the Legion was forced to apologize and amend its policy.

Jauhal also received threats from white supremacists for raising the issue. During these difficult times, his wife died after suffering a cardiac arrest.

When Jauhal moved to Surrey in 1980s, he had to hear racial taunts, like "Paki Go Back."

In 2013, he told his story in his memoir, A Soldier Remembers, and was given a standing ovation at the launch of his book. Among those in attendance were former elected officials who supported him in the 1990s, and the event turned into a celebration of his life.

Last year when the Conservatives banned Muslim women from covering their faces during the citizenship oath ceremony, Jauhal re-emerged in the public eye to say that the rules must be amended to accommodate their religious freedom, much as rules were changed for the turbaned Sikhs in Canada.

The issue polarized Canadian voters during the federal election campaign last year. So much so that turbaned Sikh Conservatives, including then federal minister of state for multiculturalism Tim Uppal, saw nothing wrong with the ban.

Gurpreet Singh is a Georgia Straight contributor and a founder of Radical Desi. He's working on a book tentatively titled Canada's 9/11: Lessons from the Air India Bombings. He has a Facebook page called We Are All Untouchables!!!