25th April 2015 is the 100th anniversary of Gallipoli, a disastrous campaign of World War 1. Whilst most of the world won't mention the contribution and bravery of the Sikh soldiers who were involved in the campaign, we do ! 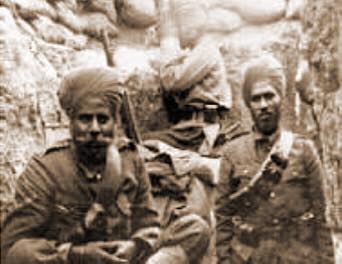 We salute their courage !
Lest we forget ...

Few of us Australian Sikhs - especially of the younger generation - know that the spirit of Anzac Day, which has such solemn significance to New Zealanders and Australians, has a deep Indian connection to Sikh community.

When the first World War broke out in 1914, there were six battalions of the Sikh Regiment forming part of the British Army.

Since the Sikh soldiers were known for their bravery and steadfastness, the British employed all the Sikh battalions, except the 35th Sikhs, fighting at such far-away places as Egypt, Palestine, Masopotamia, Gallipoli and France. In all the battles in which they fought, they suffered heavy casualities. However, there was no wavering among them and they always stood like rock as to rank sky high among the fighting men. While recounting their brave deeds, the immediate attention of all who have a sense of history goes to the first battalion of the Sikh Regiment called the 14th Ferozepur Sikhs, which was moved after a short stay in the Suez Canal area to Gallipoli.

Gallipoli was the original Normandy. Early morning on April 25, 1915, the Anzacs (Australia and New Zealand Army Corps) landed at Gallipoli in vessels that “moved like giant snakes in the water”.

The battle of Gallipoli was fought in an attempt to capture Constantinpole and take the Turks, who had entered the war on the side of Germany, out of the war. The 2nd Royal Fusiliers were finding it impossible to even clear the beach heads and so the Coy of Sikhs was sent for their help, although the allies did not succeed, the bravery shown by the Sikhs during this operation became a glorious chapter in the history of warfare.

The task given to the Sikhs was highly arduous. They were to capture two Turkish Trench lines called J-ll and J-13. The brave soldiers of 14th Sikhs were equally divided for the assault on these two lines. The fierce battle took place on 3rd and 4th June, 1915, wherein the brave soldiers of 14 Sikhs lost 371 officers and men killed or wounded.

Gen Sir Ian Hamilton was the concerned General at that time. When Lord Kitchner, Secretary of State for War, received an appeal on January 2, 1915, from the Russians that with a view to diverting the Turks, a diversionary front be opened, the War Council decided on a joint attack under Gen Hamilton. When Hamilton landed on April 25 at the Southern Tip of the Gallipoli Peninsula, he found that their strength as compared to that of the Turks was highly inferior. He also realised that the terrain greatly favoured the Turks, who were well dug-in. With a view to meeting the situation effectively, he had made the 14th Sikhs of the Indian Brigade a part of his expeditionary force. Sir Hamilton wrote to the Commander-in-Chief in India.

“In spite of the tremendous losses there was not a sign of wavering all day. Not an inch of ground was given up and not a single straggler came back. The ends of the enemy’s trenches were found to be blocked with the bodies of Sikhs and of the enemy who died fighting at close quarters, and the glacis slope was thickly dotted with the bodies of these fine soldiers all lying on their faces as they fell in their steady advance on the enemy. The history of Sikhs affords many instances of their value as soldiers, but it may be safely asserted that nothing finer than the grim valour and steady discipline displayed by them on the 4th June has ever been done by soldiers of the Khalsa.”

The brave Sikhs, who earned a very high degree of appreciation included Sardar Udai Singh, who had saved the life of 2nd Lt R.A. Savory. The handsome Jat Sikh of Manikwal village (near Gill railway station) was over 6 ft tall and had a fair beard and light green eyes. He was a wrestler from his very childhood and when in 1907 he went to Ferozepur to take part in a wrestling match, he was selected by the British to join the 14th Sikhs. He was with the unit when Hamilton’s forces landed at the Gallipoli Peninsula. It is interesting to note that when after the war, he was offered a gallantry award, he pleaded that he should be allowed to go back to his village so that he could pursue his vocation which was dear to his heart.

Another prominent Sikh soldier associated with this battle was L/Nk Bhola Singh. When Lt. Gen. Sir Reginald Savory came to India in 1968 to attend the presentation of colours ceremony at Meerut, L/Nk Bhola Singh was also present on that occasion. Recapitulating the past, the General spoke about the close relationship between officers and his men as was achieved during that period. In his own words:

...’’Only this morning (8th February 1968) Lance Naik Bhola Singh of the 14th Sikhs, who had been wounded in Gallipoli in 1915, took the trouble to come all the way from his home to call upon me, and after 52 years we saw each other again. I was deeply touched, not only at having the pleasure of seeing him again, but also at the thought of all the trouble he had taken to come and see me. When he was wounded, he and I were both young men. Now he is a ‘chitti dari wala‘ and I am old and bald, but although we have both grown much older, yet our affection for each other and our mutual pride in our old Regiment stays as young as ever. Long may this continue.
WaheGuru ji Ka Khalsa, WaheGuru ji Ki Fateh.”

During one of these attacks on Colonel Palin’s party, on the evening of the 4th June, a Sikh firing from the trench next to Lieutenant Cursetjee, suddenly fell back and said he was hit in the head. There was mark on his turban and no sign of any bleeding. Cursetjee, therefore, told him to continue firing. The next afternoon, when the Sikhs were all washing in the stream that flowed through the gully, this man ran up to Lieutenant Cursetjee, nearby, and said: Look! you said I was not hit last evening”, and he held up the “Kanga” with a bullet embedded in it.

The discussion on the battle of Gallipoli will not be complete if no mention is made of the appreciation earned by the Sikhs from the Fusiliers. It was in 1921 when the Fusiliers had been put on the firm footing and they along with the Sikhs were on duty in the Khyber Pass area in the North-West frontier of India. The Fusiliers presented the Sikhs with a Silver Grenade inscribed “in the memory of Gallipoli 1915 and the Khyber Pass 1921", which continues to be a prized possession with them.