Land Of Five Rivers - Wake Up 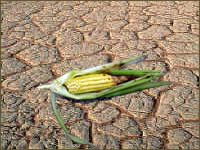 The Energy Research Institute, a New Delhi think tank, says that already in an agriculture-based state such as Panjaab in the north, 98 percent of ground water has been exploited. The Forum for Bio-Technology and Food Security adds that if the trend continues, the once fertile Panjaab- once known as the country's granary - will turn into a desert.​


FORCING A DESERT UPON THE LAND OF FIVE RIVERS​


International environment agencies have cautioned that Panjaab , the land of the five years, could become a desert by 2025.​


The water table in Panjaab is at 30 meters deep and even 80 meters in some areas; each year it loses over a metre.​


Panjaab 's economy is largely dependent on Agriculture. It has been the bread basket of India . In the 1960's it solved the nation's long suffering food shortage problem by achieving the highest yields per acre of wheat production.​


However current forecasts paint a dismal picture of impending desertification.​


The Panjaab State has not been allowed to diversify its economy to non agricultural alternatives. Whilst the Indian nation's dependency on Panjaab may be overcome by diverting agriculture demands to other states, the Panjaabi farmer is becoming destitute and poor. The Panjaab State could go into irreversible decline.​


WHY IS THIS HAPPENING? ​


Panjaab lacks autonomous decision making, the state is subject to Indian Government's policies which also determine investment strategies. While this relationship may be acceptable as any other relation between a state within a union nation, serious concerns arise as to why Panjaab has been the subject of neglect and indeed deliberate policies to erode its economic status.​


The facts speak for themselves -​


1. The Panjaab State was forced to rely on agriculture.​


2. The State has harnessed about 98% of its agriculture potential; 95% of which is dependent on irrigation - 60% of this is from groundwater, i.e. water pumped from ground.​


3. Panjaab was not allowed to invest in alternate industries to reduce pressure on its agriculture, and thereby create jobs for new graduates.​


4. Panjaab farmers have been forced to grow rice due to the small margins imposed by the central government on other crops. Rice demands considerably large amounts of water, almost all of which is pumped from the ground; hence increasing the depletion of the water table.​


5. Unlike western countries where farmers are subsidized to rotate cropping, the central government has prohibited such subsidies. This has forced farmers to use every inch of their land to its fullest capacity, resulting in water and mineral depletion.​


6. The central government has forced diversion of Panjaab 's river waters to other states.​


2. Better water management. Let the Panjaab State have a say in its economy​


4. Subsidies to farmers to keep land free of cropping.​


However it is unlikely that the Indian government will take any of these steps , unless International pressure is imposed through organisations like the UN. ​


The environmental and water crisis in the Panjaab​


Several decades of Green Revolution agriculture - the intensive use of water and chemical pesticides and fertilisers on hybrid crops to increase crop yields - has degraded much of the land and water in north-western India , making it difficult for people to live there.
Pardeep Singh Rai ​


Panjaab, the famous land of five rivers, is a semi-arid landlocked region in the north-western part of South Asia . The very existence of this vulnerable region depends on the waters of the five rivers, all tributaries of the Indus River . This highly productive region is known as the breadbasket of both India and Pakistan , and it was here that the Green Revolution was considered a success.​


But various practices have led to the environmental degradation of the Panjaab. Industrial agriculture, involving the excessive use of pesticides and fertilizers and intensive irrigation, was implemented in the region through pressure from the government and multinationals. The planting of rice, a non-traditional crop in this semi-arid region that requires intensive irrigation, is causing an environmental crisis. The International Rice Research Institute has questioned to what extent rice cultivation should be permitted in the Panjaab. Price ceilings on agricultural produce and restrictions on its export imposed by the government on Panjaabi farmers have prevented them from planting other crops that use less water. Despite the intensive irrigation, river water is diverted to less productive regions in Haryana and Rajasthan, leaving the Indian Panjaab with only about one-quarter of the water from its rivers. This diversion means that the Panjaab does have the water it needs for irrigation. Panjaabi farmers have had to dig tube wells to extract groundwater and have done so beyond sustainable levels. The construction of dams on the Panjaabi rivers has served the elite only and has altered both the volume and the course of the rivers. Many are now dry sand beds, especially the smaller streams.​


As a result of all these practices, in just four decades, the Panjaab is extensively degraded.​


Groundwater has been pumped out at a much faster rate than it has been replenished. As a result, farmers have deepened their tube wells, and the entire irrigation process has become much more expensive. In future, village wells might dry up as they depend on the same aquifer. This would cause immense hardship to rural people who have little or no piped water supply. The annual State of the World Report produced by the World Resources Institute in Washington , DC , estimates that the gap between water usage and the aquifer's sustainable yield is so high that the aquifer under the Panjaab could be depleted by the year 2025.​


Deforestation along the banks of the rivers is also having a dramatic impact on the aquifers under the Panjaab. Because of less rainfall because so many trees have been cut down, they are not being recharged. In addition, because of the accompanying soil erosion, about 60% of rainwater is lost due to runoff.​


Aquifers become polluted when they are recharged with irrigation water contaminated with agricultural chemicals and fertilisers. During the monsoon, heavy loads of silt, along with large quantities of dissolved salts, nutrients, organic material and bacterial contaminants, are washed off the land into the aquifers.​


Due to increased mechanisation and inadequate drainage, seepage from unlined canals and over-watering of fields have raised the underlying water table. This has led to increased health (especially malaria) and environmental problems.​


In the drier climate of the Panjaab, water evaporation near the soil surface leads to a steady accumulation of salts in the land that eventually results in kalar (soil affected by salt) and reduced crop yields. An estimated 21% of irrigated agricultural lands in the Panjaab are affected.​


The land has been intensively cultivated at the expense of grazing and traditional long fallow periods. Few conservation measures have been followed. In this semi-arid region, moreover, wind erosion is also a serious threat to water balances.​


The Himalayan glaciers that feed Panjaab's five rivers have been receding faster than in any other part of the world. In addition, changes to the monsoons are likely to reduce the water sources of the Indus River system and directly affect the people of Panjaab.​


The very survival of the Panjaabi people in a sustainable environment is at risk. Continued excessive use of groundwater for agriculture in India and Pakistan could well result in the Panjaab becoming a desert in the early 21st century. Before this, however, water scarcity might well lead to confrontation and armed conflict between India and Pakistan , which both have nuclear weapons, with disastrous consequences for the Panjaab, particularly for the poor and the environment.​


The socio-political problems plaguing this region need to be tackled. Moreover, integrated water resource management in the Panjaab must encompass the needs of the poor, women, landless and tenant farmers. Irrigation should be made more efficient by adopting micro-irrigation techniques, and crops that need a lesser amount of water should be planted. Programmes governing the use of water need to incorporate ecological sensibility, and need to start at the village level to develop holistic solutions that meet people's needs.​