Kartarpur, a small bandaid on the wound of Partition | SIKH PHILOSOPHY NETWORK
Menu
Log in
Register

Kartarpur, a small bandaid on the wound of Partition

The corridor is rather a small band-aid on that wound, still hurting somewhere, even after 72 years. Not that the people have forgotten the trouble-torn days of militancy in Punjab. They are cautious, yet they want free access to the other side, at least the Gurdwara associated with Guru Nanak.

A burly Pakistan Ranger greeted me with a broad smile, as I entered the neighbouring country’s gate along the zero line on the day the Kartarpur Sahib corridor was to be thrown open.

There was warmth in his smile and honesty in his expression. “Assi tan savere ton udeekde san tunhanu. Akhhan odhar hi laggiyan san (We have been waiting eagerly for you since morning with our eyes on Indian side of the gate),” he said. 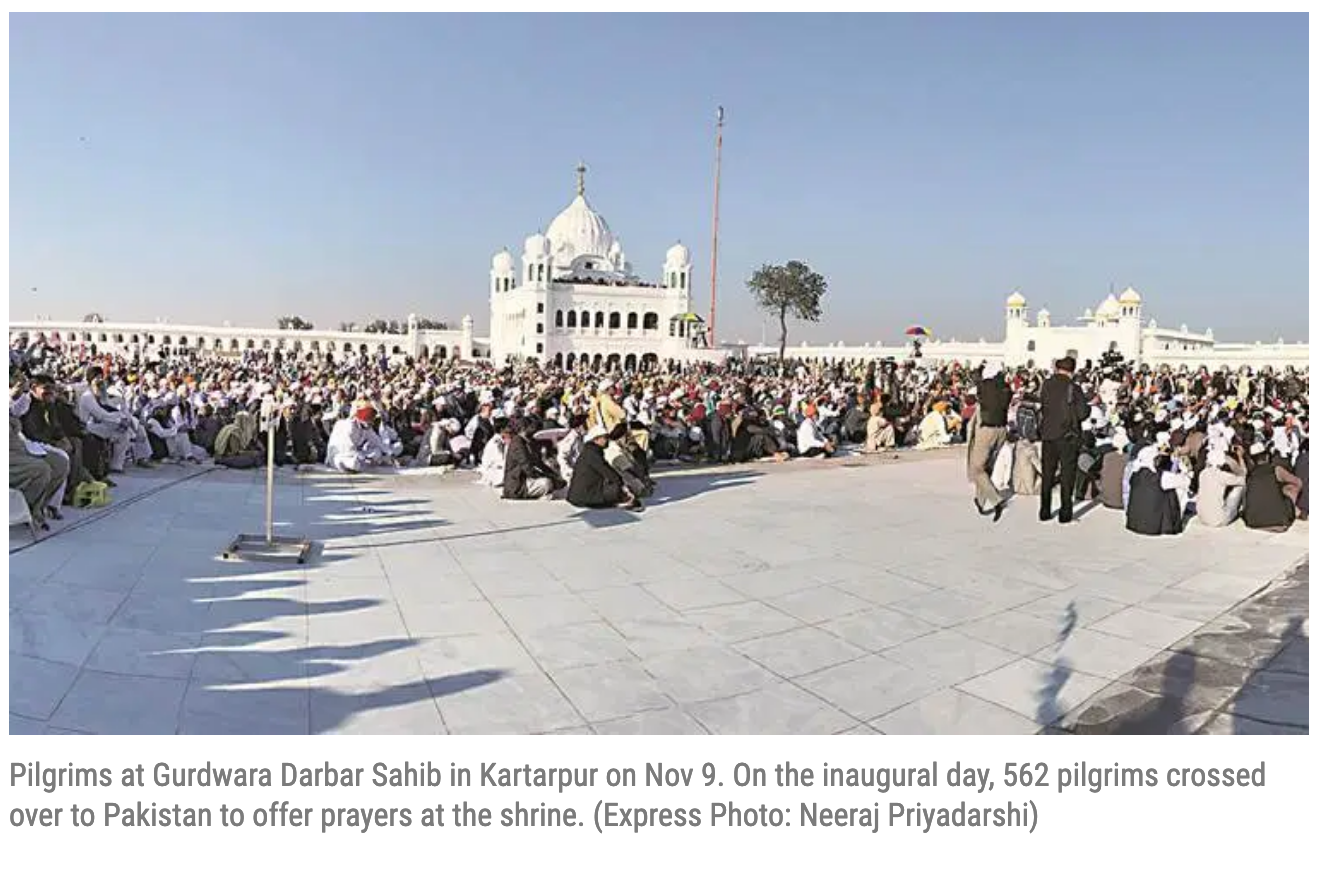 He was not the only one who was greeting the pilgrims from Indian side with folded hands. The drivers of e-rickshaws, immigration officials, the security personnel, all seemed to walk an extra-mile to extend hospitality to the pilgrims. And it came quite naturally to them. The smiles were certainly not plastic.

“Do not worry. Just show me your ETA. This is your own country. Just that we are meeting after Partition. I just wish our grandparents were alive to witness this historic day. They suffered the most after Partition. Their friends went to the other side. I used to hear stories. I am sure when our children are our age, this border will be gone,” said an immigration official, his nameplate with Shoaib written on it.

Shoaib’s words melted my heart. As a child, I had heard first-hand accounts of Partition from my grandmother, who had to leave Lahore to settle down in Patiala in August 1947. She was always starry-eyed as she remembered Lahore and narrated her stories.

I always felt she carried a wound that did not heal. She was not alone. The whole of Punjab, in fact, lives with that wound of Partition. That is the reason the political narrative opposing Kartarpur corridor does not resonate in the state. The corridor is rather a small band-aid on that wound, still hurting somewhere, even after 72 years. Not that the people have forgotten the trouble-torn days of militancy in Punjab. They are cautious, yet they want free access to the other side, at least the Gurdwara associated with Guru Nanak.


It is from this longing that Pakistan Prime Minister Imran Khan is being hailed in this part of the country for the corridor and Punjab MLA Navjot Singh Sidhu on the other. Both are being seen as facilitators for realising a dream that people from this part of the border would be able to go to the other side to have a glimpse of the resting place of Baba Nanak. It was actually a dream that has been realised and Sikhs had made this longing a part of their ardas seeking “khulle darshan deedar” of religious places. They have been watching the gurdwara through binoculars since 2004 from Dera Baba Nanak, as the hastily drawn Radcliffe line separated them from a part of their own land.

And when Khan spoke about how Sikhs longed to visit the gurdawara, he struck a chord. His speech went viral on social media and posters hailing him as a hero mushroomed in Punjab.

As we returned from Kartarpur Sahib, there were warm goodbyes and invitations to visit again. There did not seem any deficit of trust as the Pak Rangers posed with us for selfies. As we crossed back into India, the lines of American-English poet WH Auden reverberated in my mind: “But in seven weeks it was done, the frontiers decided, A continent for better or worse divided.”

SSA to all Jios. While sharing all the joy on the Opening of this Corridor....

We all 99.9% seem to have FORGOTTEN the Most IMPORTANT LESSON that Begins with Kartarpur. This Lesson was taught by Guru nanak Ji who 10 days before leaving this earth..Bestowed GURGADEE on His Disciple Bhai lehnna Ji and ORDERED HIM TO LEAVE KARTARPUR and move to KHADOOR. The SIKHS were in a serious DILEMMA....to Stay back with GURU Nanak ji at Kartarpur (now given to Sri CHAND and his brother as their INHERITANCE )...OR Move to KHADOOR where the GURU ANGAD JI is. ALL SANGAT MOVED TO KHADOOR..as Guur nanak ji made it abundantly clear that its GURU..not PLACE..thats important.

This LESSON was REPEATED...not just once or twice./but SEVERAL times....Guru Amardass ji was ordered to leave KHADOOR and go to GOINDWAAL....Guru Ramdass ji was sent to RAMDASPUR (AMRITSAR)...Guru HARGOBIND was often in His Maternal village...BUT after his demise..Guru Har rai Ji, Guru harkishan Ji, NEVER set foot in AMRITSAR for even a DAY.....BECAUSE the GURU WAS NOT IN AMRITSAR OR KHADOOR OR GOINDWAAL OR KARTARPUR !!! Guru Teg bahadur ji made one "short visit" to Amrtisar..but the PUJAREES CLOSED its doors to him and he sat on a tharrah outside for a while before elaving never to return. GUur GOBIND SINGH ji never visited Amrtisar or any other of the places mentioned above.

What is the LESSON being repeated...repeated..again and again...That the GURU is ABOVE PLACES.

Guru Gobind Singh ji in 1708 made us attached to the GURU once again....

Soon after.....SIKHS began to get attached to PLACES...we began to forget that the Most Important is SGGS...and the SGGS is everywhere....hence my neighburhood Gurdwara's HUKMNAMA from the SGGS is EQUAL to the one coming from some "HISTORICAL GURDWARA".... Do we in our mind..consider our local Granthi reading the hukm..lower than the one we get on PTC broadcast form Amrtisar..Kartarpur..Hazoor sahib etc ?? How is that ?? GURU NANAK JI was alive for 10 days after sending the sangat to Khadoor......did some think that GN was "more important" than Guru Angad ji ? I DONT THINK GN let any sikh even ponder on that !!! WHY we SIKHS fell back on attaching so much imporatnce to Buildings (even historical they may be...but still buildings..compared to SGGS..the LIVING GURU??? in name only ??

POINT: ONLY 2 MUSLIMS who were the very FIRST persons to recognise GN ji for what He was...Rai Bulaar who gifted GN half his 34 THOUSAND Hectares of land...and Bhai mardana who left his home and wife to follow GN through thick and thin. THEY BOTH died in GN' Jis ARMS..by REQUEST !! Rai Bullar's GRAVE is just 2.5KM OUTSIDE Nankanna sahib (which stands on the 18,000 Hectares donated to GN by him)....did anybody read that a Jatha of SIKHS visited his Grave ?? Diid a jatha visit Bhai mardana Jis Grave ? Dont they deserve a TINY space in our COLLECTIVE MEMORY ?? WOULD GN be happy to see the likes of the LUTEREH POLITICIANS dancing at his birthday celebrations...giving FAKE speeches and glorifying themsleves..

WE have LOST the PLOT.

KartarPur, Khadoor Sahib Goindwaal, Amrtisar ALL left as INHERITANCE...to the SONS of the Gurus who were naturally only interested in property....The TRUE GIFT was GURGADEE/GURBANI..which was bestowed on the Best Candidate..and its mark was the GURBANI POTHIS. Guru nanak ji gave the Gurbani POTHI to Guru Angad and his DERA Kartarpur to his sons. Same formula followed by all succeeding GURUS. SIKHS were to follow the GURU..who had GURBANI.Period.