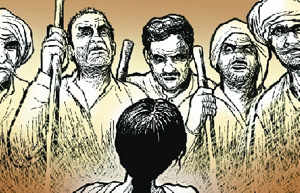 CHANDIGARH: A Haryana panchayat has banned married women in the village from seeking a share of parental property. The panchayat, which was attended by over 400 villagers, was held at Thua village in Jind last week. Social activists have sought the government's intervention to rein in the panchayats known for their bizarre diktats, including calls for honour killings.

Deputy commissioner of Jind, Yudhbir Singh Khyalia, has slapped a showcause notice on the village sarpanch and demanded an explanation for the violation of constitutional rights. Ironically, the order came from a woman sarpanch, Santosh Rani. "We will take action after receiving her reply," the police officer said.

The panchayat resolution states: "Every girl will have to part with her share of parental land and hand it over to her brothers. If she has no brother, she will give it to other family members at her parental home. If a woman violates the diktat, she will face social boycott and have to pay a fine." Village pradhan Amar Lal Kaliramna has gone a step further. He said even those who will buy land from married women will be ostracized.

Jind Bar Council member Vinod Bansal said, "If a girl approaches the court, she'll get her share of her property. After her father's death, property is transferred to legal heirs, which includes daughters."

Does the woman become automatically entitled to a share of her in-laws property once she is married?

Such Laws are necessary ONLY when..people dont have ability/confidence in their own ability....THIS ATTITUDE is at the ROOT of the Daaj/dowry/burnings of daughters in law etc etc happening in India...no such happens in other socities.becasue they teach their children to grow up confident in their own ABILITIES.

The Hindu Inheritance Act was forcefully IMPOSED on SIKHS to cause FRICTION in Punjab Villages..GIRLS were made equal owners of Family LANDS...many of these "girls" are easy meat for the babas who encourage them to transfer the land share to the Baba..who will then send in his GOONS to take possession...also provide an excuse for the INLAWS to poke their noses in the Girls parents house..and demand extra dowry etc etc..all social problems...AND NOW..HINDUS are running away from this ACT....how sweet....

I can see how, if the society is set up for the bride to be transferred to the in-laws family and thus become eligible for inheritance from them, she would be "double dipping" if she were entitled to a share of her blood family's estate.

Inheritance is a problem, period. Greedy human nature comes in and wants to take everything. Everyone fights over the scraps.

I wonder if communists have this problem.

Greedy people fight for what their fathers BUILT with their sweat and tears..this is actually a FAILING of Indian Society. In the Western Society, the son and daughter are NOT at all encouraged to wait for the old man to kick the bucket and enjoy the inheritance...they begin earning young..newspaper boys..washing cars,,trimming lawns..baby sitting etc etc and when properly educated..move away and set up their own homes..while the old man/woman...sell of their hosue and go on a well deserved WORLD CRUISE !! Have you ever heard of a INDIAN Parent doing this..NO way..they will sweat till the very last day..saving for their sons/daughters...building property..houses..for their children..then Grandchildren..working like Donkeys till they drop dead..what a waste of human resource...that breeds GREED...thats why we have so many big bellied saadhus and babas..scavenging off the poor householders...NO Wetserner has ever burned his daughter in law.alive becasue she didnt bring along her fathers house for him to live in...or didnt give him a car to drive around..or a tv to watch..or a scoter..or a fridge..or...??? NO this disease afflicts only INDIANS...

Even so, Gyani ji, Westerners have greed issues with inheritance. It is not uncommon for children to ask for a slice of their inheritance before their parent has even died!! And there is constant bickering between siblings when the parents die, 'why did he leave that to YOU in his will and not ME' and then the one sibling takes the other to court, totally oblivious that the parent's dying wish was to give xyz item to abc child. Sibling relationships can be torn apart.

I work for a charity and we often get letters from lawyers saying Mr Smith has left X (usually 5-figure sum) to our charity but that their estranged daughter/son/niece/nephew/grandchild will be contesting the will. We throw those letters away because we stand no chance of receiving a cent of the bequest that a dying person left to the charity. Even a dying wish is not enough.

And what Westerners seem to gain in terms of working young, moving out, founding their own homes and families is a disconnect in the family unit which Indian society, when functioning well, is able to keep in tact. Relationships in the West are bordered by chasms of remoteness. That is how an old person can die at home and no one notices for weeks. Bet her remaining family will be there quick-smart to take all her stuff out of her house and claim it as their own though!

Here Gyani ji, this ones for you:

Its this sort of stupidity that keeps women as scond class citizens in India.

And women choose not to be free. Many of them!

I can see how, if the society is set up for the bride to be transferred to the in-laws family and thus become eligible for inheritance from them, she would be "double dipping" if she were entitled to a share of her blood family's estate.

Inheritance is a problem, period. Greedy human nature comes in and wants to take everything. Everyone fights over the scraps.

I wonder if communists have this problem.
Click to expand...

A Dowry is a Bunch of Stuff given to a female @ her Marriage from her Family, mostly her Brothers & Dad b/c she's starting her household. The sons get the Business/land etc., & the daughter gets household stuff b/c Traditionally women have only had a Domestic Existence.

Now, this could be Interpreted Differently, b/c she's marrying a Family Unit, & not an Individual, anyone (especially her in-laws) could call Dibs, & say it's all for them. In fact the more they/she Recieves, often the more hungry they become (human nature Right?), to the point where they end up Harassing the In-laws, abusing the Daughter etc, etc. anytime they want More. So that's why it becomes so Problematic, b/c it becomes a 'Stuff' Relationship, & can easily be taken advantage of everytime there's a little problem. It's one of the most unequal relationships in our Society, therefore becomes subject to the Most abuse, that's why people Choose to Kill their Daughters b/c they don't wanna be in that Position...

Thanks Navdeep ji. It's truly sad that marriages become more about 'stuff' than the wellbeing of the children involved.