Arts/Society Gurudwara Done Enough Or Not ? 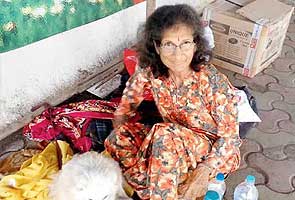 Back on the street: Sunita Naik in the salwar kameez that was gifted to her by the gurdwara, upon her return to the pavement near it

A month after finding new home, ex-editor back on pavement

Mumbai: Nearly a month after Sunita Naik and her ageing Pomeranian Sashi found a new home with Vile Parle couple George and Christine Misquitta, the 65-year-old former editor has returned to the footpath outside the gurdwara where MiD DAY had found her.

Citing adjustment issues and minor squabbles, Naik moved out of the Misquitta residence on Monday morning and returned to the pavement outside Sachkhand Darbar Gurdwara in Versova.

Naik, who claims to have been the editor of a prestigious Marathi magazine, had made the footpath her home for over two months - after mysteriously losing the millions she claims to have made with the sale of her two Worli apartments and cars in 2007.

Soon after her story appeared in Sunday MiD DAY, reader George Misquitta and his wife Christine decided to bring her to their apartment in Vile Parle (West), where they live along with their 10 pet dogs.

"Christine was really sweet to me and would take good care of me. George too would prepare meals of my choice and would even wash my clothes, but eventually what I found was that there were too many differences creeping up on a daily basis, owing to difference in our respective lifestyles. It was in our mutual interest to part ways amicably," said Naik, looking healthier, more alert and visibly happy in the company of gurdwara officials and local friends, when MiD DAY visited her on Tuesday afternoon.

Friend in need
Naik was seen asking her friend Neena Saini, who lives in the neighbourhood, to treat her to a tomato omelette with gram flour and ketchup later in the evening.

"I don't eat non-vegetarian food on Tuesdays. Food is not an issue for me as the gurdwara takes care of that, but there are times when I like some variety in my diet," she said with a smile.

Back with a bang
Naik maintained that she now has the confidence and energy to bounce back and lead her life with dignity.

Neena said that after Naik left to live with Misquitta, there had been two instances when people stepped out of their cars and enquired about Naik, wanting to host her at their homes.

Hindi film and television actor Mangal Dhillon, who was keen that Naik take up residence in one of his vacant flats, said that in her absence, a buyer purchased the property.

"We offered to take her to my Ashram in Ludhiana, Punjab, but she wants to stay in Mumbai and rebuild her career. She is also keen to track her missing money, so now, we are hunting for an alternate accommodation for her," said Dhillon.

Khurasan Khasmana Kiya | ਖੁਰਾਸਾਨ ਖਸਮਾਨਾ ਕੀਆ
This Shabd is composed by Guru Nanak ji in Asa Rag and is recorded on page 360 of the Sri Guru Granth Sahib Ji. The complete shabd is as follows.