Daas would like to share a question which a non-Sikh emailed me with and the reply to it. Thanks 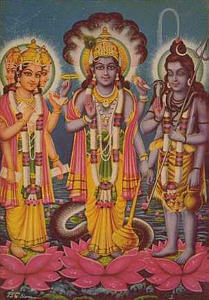 A/
According to Gurbani Shiva, Vishnu, or Brahma were kings of their respective times. However they are not given any importance or significance at all. Gurmat does not accept them as God nor as incarnations of God. Like any other human beings, they had virtues and they had weaknesses. Gurbani says:

jugeh jugeh ke raaje kee-e gaavehi kar avtaaree.
tin bhee ant na paae-i-aa taa kaa kiaa kar aakh veechaaree.7.
"In each and every age, God creates the kings, who are sung of as His Incarnations. Even they have not found God's limits; what can I speak of and contemplate? ||7||"
(Ang 423)
Click to expand...

It is clear that these kings were normal people but people sung of them and made them out to be Avtars (incarnations of God) and hence they are refered to as "Devtas" or "gods". Similarly the Pharaohs were glorified and projected as living gods and as God who kept creation alive and were the creators of the world. In eastern tradition, for example in Burma or China, anytime the public saw the king or emperor people would lay down and postrate and revered the ruler as God or incarnation of God. For example these figures are sometimes depicted with ten heads or ten arms. This is not to say that they looked like aliens because they were humans. Rather the ten heads is an artists way of depicting that the figure had the power of ten people etc. However, Gurbani is totally clear that no one can put a limit on God and God is unborn. No human can claim to be God. Just as no drop of water can claim to be the ocean.

Gurbani is not a Scripture of Stories, tales or Mythologies. Instead Gurbani uses stories, characters and mythology as a "reference" to explain the Divine Truth about God.

Gurbani is clear that there are countless Brahmas and Maheshs and Vishnus and all are under the power of One Vaheguru.

The Vedic tradition believed that three deities were responsible for creation, sustenance and destruction of the universe - Brahma, Vishnu and Mahesh. However, Gurbani uses their reference and explicitly says that all the functions of the deities are in fact all present within Vaheguru – which means that one should give up worship of deities and worship the True One (Vaheguru). The fifth Pauree (stanza) of Japji Sahib says:

eikaa maaee jugat viaaee tin chele parvaaN.
jiv tis bhaavai tivai chalaavai jiv hovai furmaaN.
ek sansaaree ek bhanddaaree ek laa-e deebaaN.
"(It is believed that) the One Divine Mother conceived and gave birth to the three deities (Brahma, Vishnu and Mahesh who were given duties for creation, sustenance, and destruction). (However) the One (God) is the Creator of the World; the One (God) is the Sustainer; and the One (God) is the Destroyer. God alone makes things happen according to the Pleasure of His Will. Such is His Celestial Order." (Ang 7)
Click to expand...

In the shabad "arbad narbad...." (Ang 1035) about creation, it is clear that there was no trinity and the origin is only God. God created these beings.

Furthermore, Gurbani is clear that all these beings are thirsting for the opportunity to get the human form because it is only in the human form that we can get Gurmat Naam and realise Vaheguru:

jis naamai kau t{censored}hi bahu devaa.
sagal bhagath jaa kee karde sevaa.
anaathhaa naathh deen dukh bhaNjan so gur poore te paae-i-Naa.3.
"So many gods yearn for Naam, the Name of the Lord. All the Bhagats (devotees of God) serve Him. He is the Master of the masterless, the Destroyer of the pains of the poor. His Name is obtained from the Perfect Guru. ||3||"
(Ang 1077)

brahm mahesh sidhh mun indraa bhagat daan jas maNgee.1.
Brahma, Shiva, the Siddhas, the silent sages and Indra beg for the charity of God's Praise and devotion to Him. ||1||
(Ang 1322)
Click to expand...

In regards to the specific example of Pauree 25, Ang 5 of Sri Guru Granth Sahib jee:

The last line of the verse/ pauree is the key to understanding what Guru Sahib intends to tell us:

jayvad bhaavai tayvad ho-ay.
naanak jaanai saachaa so-ay.
jay ko aakhai boluvigaarh.
taa likee-ai sir gaavaaraa gaavaar.26.
"O Nanak! God is as Great as He wishes to be. The Eternal True Lord knows Himself (how Great He is). If anyone presumes to describe God (and how Great He is), then that person shall be known as the greatest fool of fools! ||26||"
(Ang 5)
Click to expand...

Guru Sahib tells us that in the world there have been countless intellectuals and scholars and there will continue to be. But, till now no one has been able to work out how Great God is and how many blessings is He bestowing upon living beings. Infinite are His virtues and infinite are are His gifts. Without God, no one can know this. This work is not in the capability of humans. That human is the greatest fool who claims to have bundled together all of God's virtues and gifts.

Although English translations are useful and provide great knowledge to Sikh Studies. However, through literal word for word Panjabi or Gurmukhi translation to English causes the implied meanings of a Shabad (hymn) to be lost and for a reader with little or no knowledge of Sri Guru Granth Sahib jee, historical knowledge, grammatical knowledge, knowledge of similies and metaphors, knowledge of culture and tradition refered to etc, the true meanings can be lost.

This writting tells us that instead of going after manmat, we should read and learn/understand Gurbani, grasp the real essence of it- ALL DOUBTS WILL BE CLEARED.