Dr. Dalvinder Singh Grewal​
After visiting Leh in Ladkh and Kargil we reached at night in Gurdwara Sixth Guru (Chhati Patshahi) in Srinagar and paid our obeisance. Before we visit ther Gurdwaras in Kashmir our plan was to start by visiting Gurdwara Hari Parbat which Guru Nanak visited in 1517 AD during his third travel. We got the details and a guide from Gurdwara Sixth Guru. 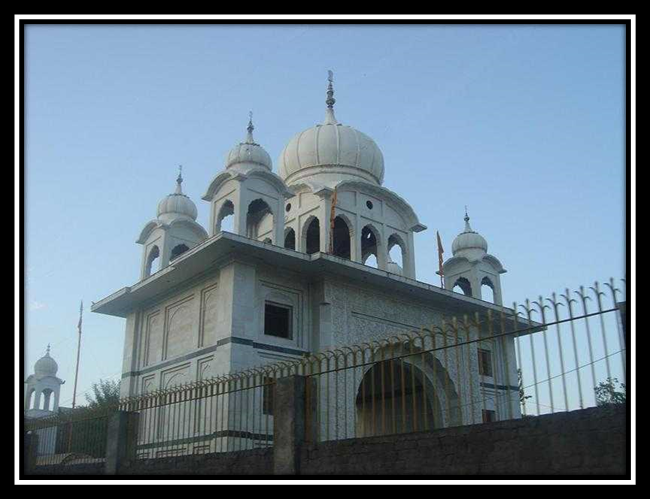 Gurdwara of Sixth Guru Srinagar down the Hill.​
As per the information available in Gyani Gian Singh’s book Twareekh Guru Khalsa Part I Guru 1(1880 R 1970); Dr. Surinder Singh Kohli’s book (1969), Travels of Guru Nanak and Gur Teerath Cycle Yatra by Bhai Dhanna Singh Chahal Patialvi (2016) Guru Nanak visited hari Parbat during his third travels while returning from Leh-Ladakh. Hari Parbat is a hillock overlooking Srinagar. There are various anecdotes about its name: one such most accepted anecdote is that it was famous Sikh General of Maharaja Ranjit Singh Hari Singh Nalwa on whose name Hari Parbat was named. According to another mythical anecdote it was named after a bird ‘hari’, the shape which a deity Sharka Devi took to bring a piece of Sumer to fill the large lake to create this hillock. In Kahsmiri language ‘hari’ means ‘bird’. 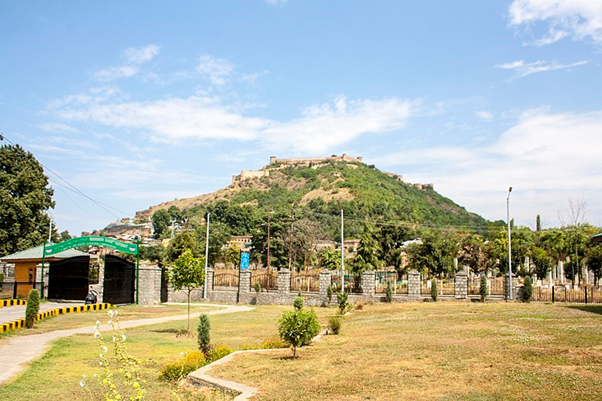 Guru Nanak came from Leh through Kargil and Tamasdan to Srinagar where he sat and enjoyed the beauty of Wullar Lake and then moved to Hari Parbat. Sultan Mohammed Shah ruled Kashmir then. It was named Kohimaran then (meaning a hill of snakes). When Guru Nanak visited the place, this fort did not exist. There was a population around the hill then and there were many temples of different deities around the hill. Most of these temples were destroyed during Muslim rules which, however, were rebuilt during Khalsa Raj.

Branded with a thousand marks of disgrace, Indra cried in shame. Paras Raam returned home crying. Ajai cried and wept when he was made to eat the manure he had given, pretending it was charity. Such is the punishment received in the Court of the Lord. Rama wept when he was sent into exile, and separated from Sita and Lakhshman. The ten-headed Raawan, who stole away Sita with the beat of his tambourine, wept when he lost Sri Lanka. The Paandavas once lived in the Presence of the Lord; they were made slaves, and wept. Janmayjaa wept, that he had lost his way. One mistake, and he became a sinner. The Sheikhs, Peers and spiritual teachers weep; at the very last instant, they suffer in agony. The kings weep — their ears are cut; they go begging from house to house. The miser weeps; he has to leave behind the wealth he has gathered. The Pundit, the religious scholar, weeps when his learning is gone. The young woman weeps because she has no husband. O Nanak, the whole world is suffering. He alone is victorious, who believes in the Lord’s Name. No other action is of any account. || 1 || (SGGS 953)

The above hymn was for those who always felt negative. For those who thought positive and follow the Guru, he sang, “Manne pavh(i) mokh(i) duar(u). Manne parvarai sadhar(u) (SGGS, p.3) translated as

There is one path and one door. The Guru is the ladder to reach one’s own place. Our Lord and Master is so beautiful, O Nanak; all comfort and peace are in the Name of the True Lord. || 2 || (SGGS, p.1279)

When asked about the originator of the universe, the Guru relied, “Aapinai aap(u) sajio aapinai rachio nau”. (SGGS p.1279) translated as

He Himself created Himself; He Himself understands Himself. Separating the sky and the earth, He has spread out His canopy. Without any pillars, He supports the sky, through the insignia of His Shabad. Creating the sun and the moon, He infused His Light into them. He created the night and the day; Wondrous are His miraculous plays. He created the sacred shrines of pilgrimage, where people contemplate righteousness and Dharma, and take cleansing baths on special occasions. There is no other equal to You; how can we speak and describe You? You are seated on the throne of Truth; all others come and go in reincarnation. || 1 ||(SGGS, p.1279)

These hymns and the explanation given by Guru Nanak was mesmerizing. All the present became Guru Ji’s followers. Even though they maintained their Pundit caste but they themselves called Sikhs of the Guru.From this place Guru Nanak went to Hari Ban which is now known as Harri Ban and about 20 Kms from Haripar bat as the crow flies.

Emperor Akbar built a fort around this hill in 12 years initially spending about Rs 1 Crore (10 million) from his coffers and remaining he collected from Kashmir. 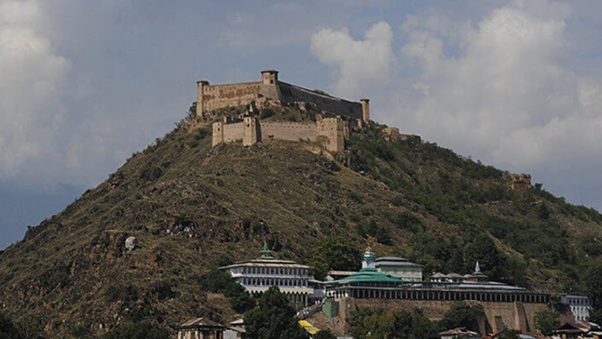 Fort at Hari Parbat​
When Akbar’s General Ata Khan was getting the fort constructed he earmarked the site where Guru Nanak sat and made a platform then known as ‘Thada Sahib’. The Sixth Guru who visited Srinagar along with Emperor Jehangir, got a small Gurdwara constructed at the place. Later a Mandir was also constructed next to the Gurdwara. Both these were managed by a pundit.

Gurdwara flag overlooking the temple (b) Gurdwara building behind the temple.

He got a copy of Manuscript of Bhai Banu from local Pundits and established it in the Gurdwara. This was written by Kashmiri Sikh on a Kashmiri paper. A local Pundit of Kashmir was made as the priest of the Gurdwara. There used to be regular explanation of Adi Granth which was attended by Guru Hargobind and even Emperor Jehangir also attended the congregation to listen to Gurbani. He allotted 4 villages for the maintenance of the Gurdwara. These villages were Zakooran in area Phak; Gulab Bagh in area Telar, Gurupura in area Meer Berry and Kodrang in Tehsil Kulgaon. All these villages were however confiscated later by Raja Gulab Singh who manipulated to buy Kashmir from the British after the Khalsa Raj lost in its last battle with the British and Maharaja Dalip Singh abdicated the throne. Raja Gulab Singh originally a petty worker at Maharaja Ranjit Singh’s Darbar, had stolen the wealth of Maharaj Ranjit Singh with which he bought Kashmir. It was named Hari Parbat during the Khalsa raj of Maharaja Ranjit Singh the name which is now prevalent.

The tragedy of the Gurdwara at Hari Parbat is that it has never been well maintained. Gurdwara was originally looked after by the pundits and the income was from four villages given to the Gurdwara by Jehangir. These were continued during Khalsa Raj, However when Gulab Singh purchased Kashmir from the English, he got most of the Gurdwaras in Kashmir destroyed and stopped in ome to these Gurdwaras from all the attached villages.Son of Gulab Singh however allowed the reconstruction of Gurdwaras and some amount in the form of rs was also allowed, however the new shape of the Gurdwara was of a Mandir. The old GriGuru Granth Sahib has gone too old hence had to be changed. The priests of the Gurdwaras were the pundits. The mandir which constructed closed to the Gurdwara was gicven preference. Even the extra material of the temple was dumped into the Gurdwara room whici=h was just 10x8 feet. It remains so till date and is now in a dilapidated condition. As we visited this Gurdwara last month it was in a small dingy type of room. The Gurdwara was being looked after by the CRPF and a Sikh sepoy who does not know to read Sri guru Granth Sahib well and has beard cut is looking after the Gurdwara. Going to it is also not free. One has to purchase a ticket for Rs 50/- from the J &K Department of tourism at the main gate of the Fort. 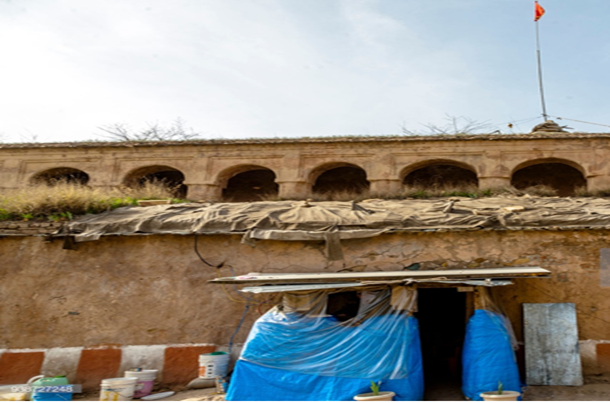 Gurdwara Guru Nanak Dev Ji in Hari Parbat Fort​
There is a strong need to save the building and rehat maryada of the Gurdwara. Unattended, it may fall any day.
G

SPNer
I have got some better view of flag of Gurdwara Hari Parbat extracted from a video.I hope this will create a better record and to encourage some visitors to place to release some free image to be documented at Wikipedia with CC0 or public domain license. 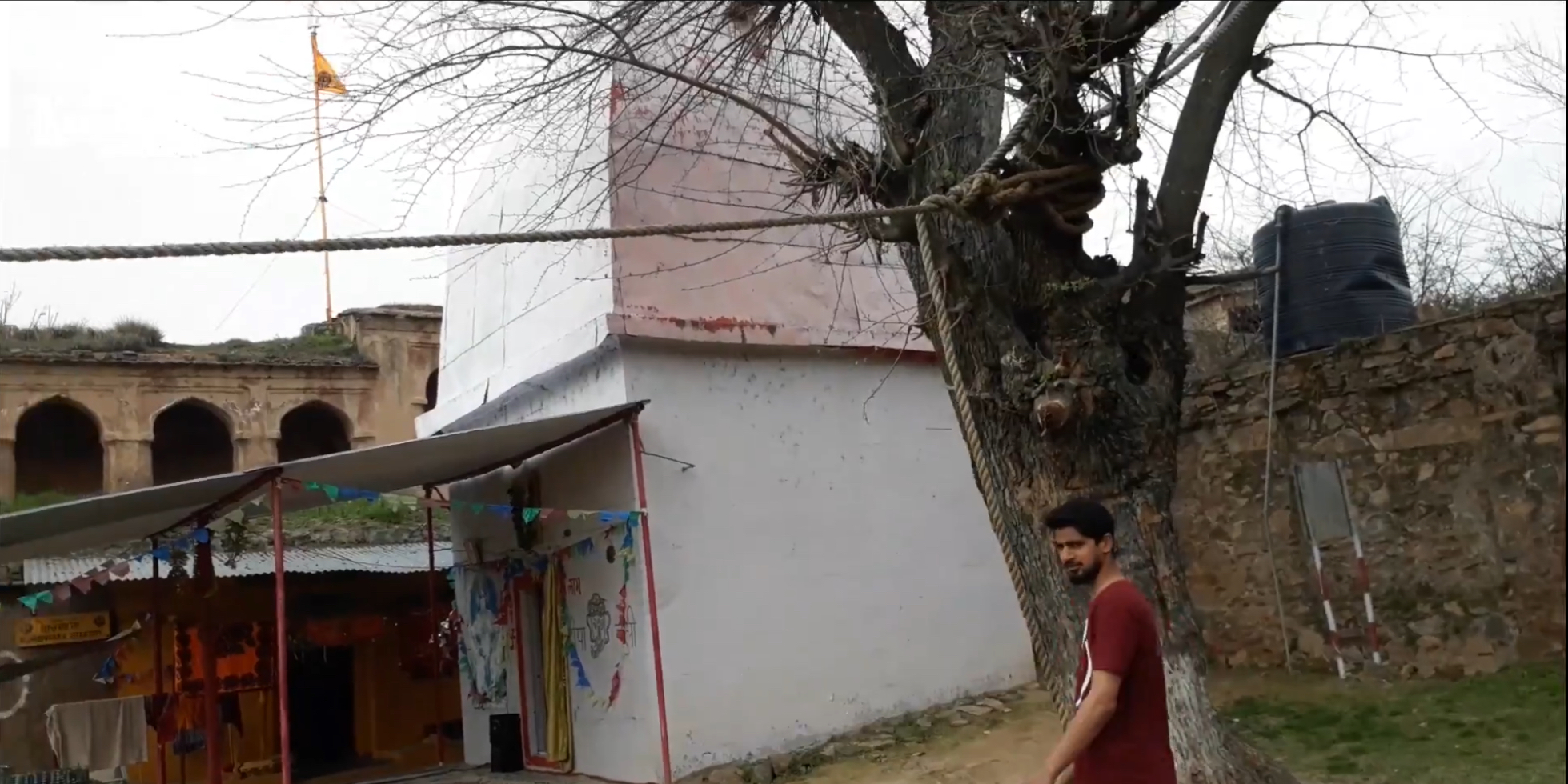