Bhai Vir Singh wrote the first Punjabi novel ‘Sundri’ in 1899. This book was written at the time when Sikhs were at a moral low after the fall of their empire and the anexation of the Punjab by the British.

The purpose to write such novel was to remind the Sikhs of their glorious past and to capture the divine spirit of the Khalsa.

After a gap of 100 years, Giani Kesar Singh wrote ‘Hathiarband Inqlab’ in 1998 to relive the patriotic spirit. This novel has much wider canvas than Bhai Vir Singh’s novel, though both works are based on historical facts.

The seventh chapter of the novel is of autobiographical nature that reveals many hidden aspects of his INA days.

Bhai Vir Singh wrote the first Punjabi novel ‘Sundri’ in 1899. This book was written at the time when Sikhs were at a moral low after the fall of their empire and the anexation of the Punjab by the British.


The purpose to write such novel was to remind the Sikhs of their glorious past and to capture the divine spirit of the Khalsa.


After a gap of 100 years, Giani Kesar Singh wrote ‘Hathiarband Inqlab’ in 1998 to relive the patriotic spirit. This novel has much wider canvas than Bhai Vir Singh’s novel, though both works are based on historical facts. The seventh chapter of the novel is of autobiographical nature that reveals many hidden aspects of his INA days.


The novel also gives vital information on the activities of Netaji Subhash Chander Bose, Lala Hardyal, Veer Sarvakar, Kartar Singh Sarabha. He also throws light on the days when he founded the Youngman Sikh Association in Penang. A multifarious personality, Giani Kesar Singh was a voracious reader, a great freedom fighter and a prolific writer who authored about 25 historical novels in Punjabi, especially on the Ghadar Movement.


He served as a Civil Administrator of the Indian National Army (from 1943 to 1945), secretary, Shiromani Akali Dal (1948 to 1957) and was the guide of Golden Temple for two years.
After authoring ‘Jangi Kaidi’ (Prisoners of War), he was hailed as Leo Tolstoy, of Punjabi literature. He breathed his last in Canada on September 21 at the age of 95.


Interestingly, his name once figured among those who had attained ‘martyrdom’ in the list published by the INA. On this, Netaji Subhash Chander Bose quipped, ‘the dead Kesar Singh would be more beneficial for the movement against British government’.


He was born in Mughal Khalsa village of Rawalpindi, now in Pakistan. He was orphaned at the age of three and had to spend his childhood in Amritsar’s Dera Sant Gulab Singh and orphanage. He got his Post-graduate degree from Khalsa College, earning it through hard labour. Then he came in contact with Netaji Subhash Chander Bose and senior commanders of the Indian National Army and went to Malaysia, where he developed his passion for writing. His first book was in English ‘Indian Independence Movement in East Asia’, published by Singh Brothers, Lahore, few months before the Independence. The foreword of the book was written by Sriyut Sarat Chandra Bose, brother of Netaji with his autographs. Sarat Bose, wrote, “Very little is known to the younger generation about the great Indian revolutionaries who left India in the early years of this century and went to Japan, China, Siam, Malaya and other lands and started their revolutionary activities there with the object to liberate India from foreign yoke. Sardar Kesar Singh has done well in giving to young India a short account of the activities of those great revolutionaries who dreamt dreams of India’s freedom and worked for their realisation. The greater part of his book is devoted to the Indians National Army — its formation, its dissolution, its reformation under the leadership of its supreme commander Netaji Subhash Chander Bose and the fight it launched for the achievement of Indian Independence.”


After the death of his first wife, Giani Kesar Singh moved to England and then settled in Canada in 1963. He also served in the Education department of Canada for 14 years. His last master piece ‘Hathiarband Inqlab’ (Armed Revolution) was published by Singh Brothers, Amritsar, in 1998. He was honoured with the ‘Shiromani Sahitkar’ by the Punjab Government last year. Mr Kuljit Singh of Singh Brothers was one of the last ones from Amritsar to meet ‘Gianiji’ when he was on his deathbed. Most books by Giani Kesar Singh were published by Singh Brothers.


Many historical novels authored by Giani Kesar Singh gave authentic information about the great martyrs associated with Amritsar, including Shaheed Udham Singh, Madan Lal Dhingra, the first Indian to be hanged in a foreign country and Pandit Sohan Lal Pathak (Patti).
Many hidden aspects of this multifarious personality, whose intellectual range was truly impressive, come out in his autobiography. It cinematically recaptures his past and days of underground life. It is a rich and evocative memoir of the author, who grew up in an orphanage of Amritsar like Shaheed Udham Singh. While the epic historical novel ‘War and Peace’ by Leo Tolstoy originally published as Voyna i mir in 1865-69 is panoramic study of early 19th-century Russian society, noted for its mastery of realistic detail and variety of psychological analysis is generally regarded as one of the world’s greatest novels, Giani Kesar Singh’s ‘Jangi Kaidi’ has vividly captured the atrocities committed on Indian freedom fighters by the Japanese. The novel also offered a new kind of fiction, with many characters. It is described as one of his two major masterpieces, the other being ‘Hathiarband Inqlab’, which is one of the longest pieces of fiction in Punjabi literature, running into 728 pages.


Few would dispute the claim of ‘Jangi Kaidi’ to be regarded as one of the greatest novel in any language. This massive chronicle, to which he was devoted, portrays the struggle of freedom fighters. His piercing insight lends universality to the work. In his Autobiography ‘Aatam Katha’, Giani Kesar Singh has not just written about the patriots, but also about his own contributions to the freedom struggle.


‘Gadar’ means revolt or rebellion. The Gadar Party was a revolt against the British rule in India and it was started and organised by Indian immigrants to Canada and the USA. Giani Kesar Singh was one of the heroes of this struggle. The movement was the result of general and natural reaction to the political, social, and economic conditions that prevailed in India in the year 1904, and on the minds of the brave and courageous of Punjabis. They were hard pressed by the adverse economic conditions prevailing in the Punjab at that time to earn their livelihood.
The former Vice-Chancellor of Guru Nanak Dev University, Dr S.P. Singh, says the canvas of Giani Kesar Singh’s novel was vast that covered freedom movement, INA activities in South Asian countries. ‘Lehar Vadhdi Gai’, used to be read like a ‘text book’ by the Communists. He documented the contribution of gurdwaras in Canada and other countries to further the Gadar movement. He collected historical documents. His personal library has rare documents and pictures of the freedom fighters. Giani Kesar Singh took pains to collect information on Shaheed Madan Lal Dhingra, the first Indian who attained martyrdom in a foreign country, with the help of renowned Punjab poet Balwant Bawa and wrote a beautiful novel.


Giani Kesar Singh also wrote a biographical novel on Baba Hari Singh Usman, who was born in 1880 at Baddowal, Ludhiana district. He served the British Indian Army for a short spell. At the age of 27 he went to the USA but found the atmosphere choking because the Indians were given a shabby treatment. He then joined the Gadar Movement.


Baba Hari Singh was entrusted with the delicate and dangerous task of accompanying the ship laden with arms and ammunition, procured with German assistance, to centers of rebellion in India. There is also marvelous description of one Mewa Singh Gill, a revolutionary from border village of Lopoke (Amritsar). He was responsible for the assassination of Hopkinson, a Canadian officer who was disliked by the ‘rebels’. He was born in India (English father, Indian mother), and could speak Indian languages fluently. He had established a ring of informers who used to report to him about the activities of the Sikh community. He played an active part in refusing admission of Sikhs who arrived at Vancouver in the Kamagata Maru.


The flash point, leading to his murder was the false evidence which he was to give to save one of his stooges who had murdered two Sikhs in cold blood. Mewa Singh Lopoke, a devout Sikh and known revolutionary, shot Hopkinson on October 21, 1914, on the court premises before he could give fabricated evidence. After the killing, Mewa Singh surrendered to the police. He was hanged in a Canadian jail on January 12, 1915; his day of martyrdom is celebrated all over Canada to this day.

‘Janj Laryan Di’ is based on the supreme sacrifice of seven Gadri Babas. He has also penned novel on Shaheed Udham Singh. He made emotional reference to Pandit Sohan Lal Pathak , another freedom fighter of Amritsar district, who was born on January 7, 1883, in the house of Pt Chanda Ram, a poor Brahmin of Patti, Amritsar.


Pathak had resigned his job as protest against the Headmaster’s ordering him to break off contacts with Lala Lajpat Rai and other national leaders. Thereafter, he became the Joint Editor of the Urdu journal ‘Bande Matram’ working under Lajpat Rai. Giani Kesar Singh writes that he was shocked to learn that the ‘near and dear ones’ of Pathak made his statue, showing him wearing ‘dhoti’ to project him as a leader of a particular religious class.


The fact remained that Pathak used to keep two revolvers with him and hence was a secular and great revolutionary. Sohan Lal Pathak shifted the field of his activities to Burma. Immediately, a search was started for the arrest of this dangerous revolutionary. It was not easy to lay hands upon him, as he knew the local language and moved freely in the country in the dress of the native people. At last the government succeeded in arresting him in August 1915 at Memyo (Burma). He was detained in the fort of Mandlay during his trial. The court declared him guilty and sentenced to death. He died on the gallows on February 10, 1916. 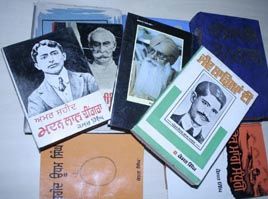