An air search for the missing Malaysia Airlines flight MH370 has again been suspended because of bad weather in the southern Indian Ocean.
Australian officials said all aircraft were returning to base but ships would try to continue.
On Wednesday Malaysian officials revealed fresh satellite images from the area that showed a possible debris field from the missing plane.
Flight MH370 disappeared on 8 March with 239 people on board.
It had been en route from Kuala Lumpur to Beijing when it disappeared from air traffic controllers' screens over the South China Sea.
So far, not a single item of debris linked to the missing plane has been recovered.
The Australian Maritime Safety Authority (Amsa), co-ordinating the search, said that aircraft had spotted three objects on Wednesday but despite several passes had not been able to relocate them.
Satellite images
As dawn broke on Thursday, Amsa said six military aircraft, five civilian aircraft and five ships would be taking part in the day's search operations.
However, Amsa later tweeted: "Update: Ships staying in search area & will attempt to continue searching but all planes returning. Bad weather expected for next 24 hours." 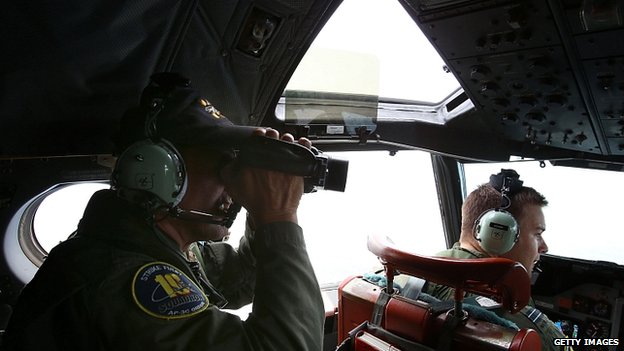 Finding possible debris in choppy seas is proving a difficult task
It is the second time this week the operation has been hampered by poor conditions.
The Australian Navy ship HMAS Success has been in the search area about 2,500km (1,500 miles) south-west of Perth and has been joined by four Chinese ships - Xue Long, Kuulunshan, Haikon and Qiandaohu.
On Wednesday, Malaysia's acting transport minister Hishammuddin Hussein said a French satellite had located some 122 objects that could be from the missing airliner.
The images, taken on 23 March, showed objects up to 23m (75ft) in length, he said.
MH370 - Facts at a glance

Analysts say the images are the first to suggest a debris field from the plane, rather than just isolated objects.
Mr Hussein described the new images as the most credible lead so far.
Erik Van Sebille, an oceanographer from the University of New South Wales, told the BBC that if aircraft debris was found, experts could try to work out where the plane had crashed, although it wouldn't be easy.
"This is home to the strongest current in the world," he said.
"Every day debris could move by easily 50, 100km... and it's not only in one direction, it's actually rather turbulent. This ocean is full of what we call 'eddies' and they are essentially mini hurricanes that spread everything out."
Malaysia said on Monday that fresh analysis of satellite signals showed that the plane had gone down in the southern Indian Ocean, with no survivors.
The reasons why the plane deviated off course and lost contact with air traffic controllers remain a mystery.
Investigators have ruled nothing out including mechanical or electrical failure, hijacking, sabotage or deliberate action by the pilot or co-pilot.
<!-- Embedding the video player --><!-- This is the embedded player component --><!-- wwrights check --><!-- Empty country is used on test environment --> 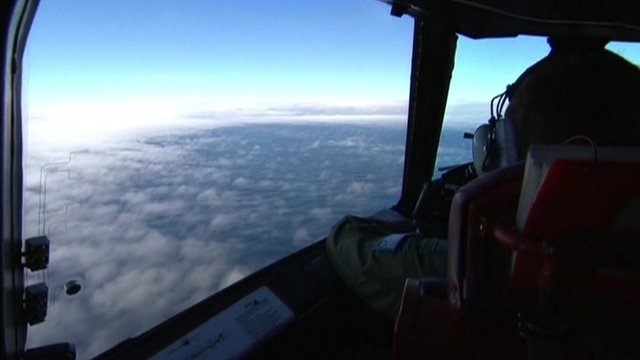 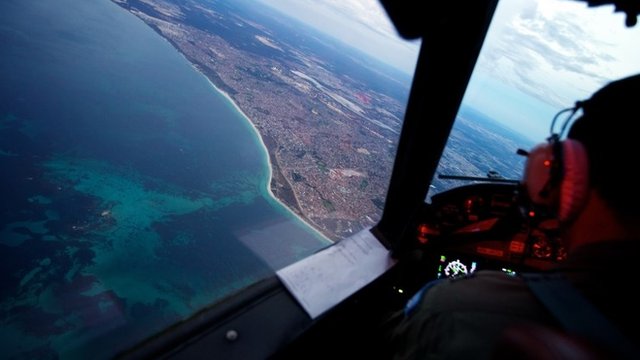 <!-- caption --> Both Malaysia Airlines and Boeing are facing legal action over flight MH370
<!-- END - caption -->
<!-- end of the embedded player component --><!-- Player embedded --> On Wednesday, FBI chief James Comey said that analysis of data from a flight simulator taken from the home of pilot Zaharie Ahmad Shah was nearly finished.
"I have teams working literally round-the-clock," Mr Comey told members of Congress.
"I expect it to be done fairly shortly - within a day or two."
In the absence of any debris from the plane, some relatives of the flight's 153 Chinese passengers have refused the accept the Malaysian account of events and accused officials of withholding information.
On Wednesday, Mr Hussein also expressed exasperation, saying that Chinese families "must also understand that we in Malaysia also lost our loved ones" as did "so many other nations".
A total of six countries are now involved in the search - Australia, New Zealand, the US, Japan, China and the South Korea.
The vast search area - in one of the world's remotest regions - has now been split into east and west sections.