"don't Ever Let Them Tell You It Can't Be Done" - Jagmeet Singh! New Deputy Leader Of Ontario's Ndp

SPNer
"Don't ever let them tell you it can't be done". 4 years ago, Jack Layton whispered these words to me as we prepared for a historic rally in Brampton. We've shown these words to be true. But even then, I could never have imagined being appointed Deputy Leader of Ontario’s New Democratic Party when I began my unconventional run in politics 4 years ago. 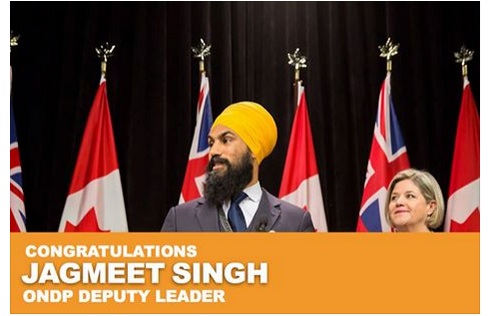 When we began this journey in 2011, we committed ourselves to the idea that no matter what the outcome, we would fight for what is just and right, not what is convenient and easy.

We believed that by bringing together those commonly seen as outsiders in traditional politics; by incorporating women and young people as leaders in our campaign offices, we would bring about the change and progress that we felt was needed.

The commitment to these ideas has led us to many great accomplishments; with the support of the Ontario NDP caucus, our leader Andrea Horwath, my team, the constituents of Bramalea – Gore – Malton and Ontarians across this province, we’ve stood up to insurance companies, taken on job agencies, introduced and passed legislation recognizing April as Sikh Heritage Month, and have raised the concerns of all communities regarding human rights, and the dignity of human life.

Our community has often felt disregarded, our voices unheard. Some feel our politicians have not acted as spokespeople for our community and have been unable to raise our concerns. It is because of this that I am so proud and humbled by this appointment, providing our community with a voice on the front bench of the legislature, and demonstrating that we are committed beyond words, to giving the community a voice within the party and Ontario's legislature.

It is truly an honor to belong to a party that supports and brings forward members who stand up for what they believe in. I would like to thank our leader Andrea Horwath, the entire Ontario NDP team, volunteers and supporters for giving me this opportunity. I am both inspired and humbled by the responsibility that has been entrusted in me as Deputy Leader, and I am confident that this appointment will help us to continue the journey we started.
You must log in or register to reply here.
Share:
Facebook Twitter Reddit Pinterest Tumblr WhatsApp Email Share Link