Humanism Does The Eternal Soul Exist?

Neuroscientists understand, at least in general, how the biological machinery of the brain can compute information. But how does a brain become aware of information? What is sentience itself? When a specific part of the brain is damaged, does the patient lose only a specific category of knowledge, such as vision or language, or can the patient ever lose some of the essence of awareness?

A clinical syndrome called hemispatial neglect may help to answer the question. It is one of the most fascinating, and horrible, syndromes in the medical literature. Neglect was first described early in the 20th century, and over the years much has been learned about it.

Imagine waking up in the hospital after a stroke to find that half your world is gone. The left side of space and everything in it has been erased from your consciousness. You can talk to the people who stand to the right side of your hospital bed, but when they walk to the left side they disappear from your mind. You dress the right side of your body but forget to dress the left. You think you've eaten everything on your plate, but have eaten only the food on the right side. You can't even conceive of a left side of the plate. When someone rotates the plate, food that you didn't acknowledge before suddenly appears. When you draw a clock, you crush all 12 numbers into the right side of the drawing and don't notice that anything is wrong. You have no insight into your own condition because, lacking any awareness of a left side of space, you can't realize what is missing.

This bizarre and crippling syndrome is not simple blindness. After all, blind people and sighted people who close their eyes know about the objects around them. Instead it is a mental blindness. It covers vision, touch, hearing, memory and concept.

Over the years, different varieties of neglect have been described and associated with damage to different brain regions. But the most dense, profound loss of awareness is associated with a region of the cerebral cortex roughly just above the ear on the right side of the brain. Much more rarely, neglect of the right side of space is caused by damage to the same general area on the left side of the brain.

The findings are controversial. That same general region of the brain has been found to play a role in social thinking -- in understanding the minds of other people. Why would a brain area involved in social intelligence also participate in one's own basic awareness? Which of the rival accounts is correct? I have argued in my scientific writing that the two functions are not rivals, and instead are closely related. Awareness, sentience itself, may be part of the toolkit we use to understand ourselves and each other. It may be a function of our social brain.

In my view, there really is such a thing as a spirit, a soul, but it is not as people have imagined it in the past. The soul is information of a special kind, wrapped up into a complex structure, instantiated in the circuitry of the brain. It is quirky and individual to each of us, and is precious because it is not eternal.

The food bit is easy if you leave all the vegetables on the left and put the meat on the right ,then I would only eat the right anyway,but if he puts a pair of trousers on and forgets to put the left leg in and does not guess something is wrong with the one leg that he is dragging behind himself I think he might have serious problems.

In my view, there really is such a thing as a spirit, a soul, but it is not as people have imagined it in the past. The soul is information of a special kind, wrapped up into a complex structure, instantiated in the circuitry of the brain. It is quirky and individual to each of us, and is precious because it is not eternal.
Click to expand...

In order to be eternal, the nothingness must have had somethingness to make it eternal down the road.

Does eternal mean going in circles?

We say Sri Guru Granth Sahib Ji, as our eternal Guru- The Teacher- because our life span itself is thought to be eternal till we take the last breath, which makes us cease to learn from our Teacher. Hence, the soul is eternal in this sense.

Then, The Guru becomes eternal for others who follow us and start learning from The Teacher.

I was excited to see the title of this thread. The article lost me a little bit. But when I started pondering the reality (or not) of reincarnation, I realised the question that comes before that is 'what is it that would, or would not be, reincarnated'.

And thus I started wondering, do we have souls? Is there a part of me that is a soul (or maybe I'm part of the soul, not the other way around) which will continue on as an individual entity when this mortal body expires? There would need to be if the theory of reincarnation is to be able to work.

Or maybe the eternal part is not individual to me at all, but is literally creative force, and there is no individuality to continue on. If that makes sense.

But Gurbani says lots about the soul, so I find myself a tad confused. There is either a duality of "me" and "It" or it's all "It" all the time except for this manifestation in creation which is transient.

So, does Sikhi teach that we have eternal souls? Or are we actually ONE eternal soul peering out through many different physical forms?

spnadmin ji thanks for an extremely brilliant post to start this thread.

spnadmin ji and Ishna ji I will be posting some thoughts that I am crafting right now. It is like real and virtual footsteps in time that mark the landscape of life as it continues through us, the before us and after us. 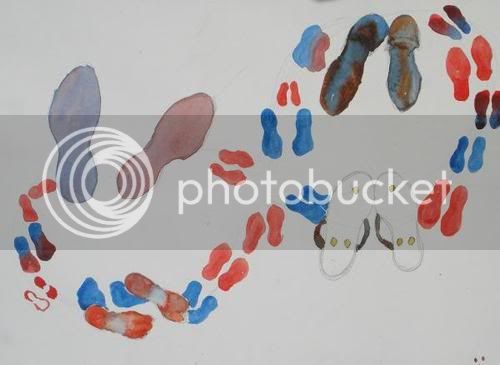 Thanks for the brilliant image that speaks eloquently to the central question. The picture says more than the article, which like Ishna ji I found somewhat baffling. It would be great to hear what others think the picture describes, what understanding they give. Remarkable.

My own personal interpretation is that the we are at birth given a base point, and our soul is set to a certain level, throughout life, the soul learns and evolves, till death, some souls learn much, some learn nothing, some stay the same and just enjoy life.

IF reincarnation actually exists, and it is a big IF for me, as I hold dear nothing more than I will be wormfood, but more study is needed of the SGGS for me on that one, then I would imagine the base point is slightly higher than before, which would explain why sometimes you meet people who really have no clue, and some who are incredibly clued up. I would not think this is about how much good or evil you do, rather, how much you have learnt. Although clearly most learned people are also good people or at least they are bad people who know they are bad. At some point, you graduate to the point where you have learnt enough to know the ultimate truth, but at this stage this is all just fanciful thinking and not the basis of my own personal view ,

Of course this could work to some extent if you do not get reincarnated, and your DNA seeps into the earth to be reabsorbed by other animals, in a scientific, rather than spiritual way, but I have not, as yet, worked that one out, as it is a bit random in who gets your DNA!
Share:
Facebook Twitter Reddit Pinterest Tumblr WhatsApp Email Share Link