Blueberries have long been touted as a superfood, high in antioxidants, vitamin C, and manganese. And unlike other superfoods like acai berries, bee pollen, and wakame seaweed, blueberries are relatively inexpensive, accessible, and an easy sell to anyone skeptical of health food. So this reputation is the reason why blueberries seem to be in just about everything from muffin mixes to salad dressings – because they add layers of nutrition and deliciousness that would otherwise be lacking. Nevermind actual fresh blueberries, which are only in season about 2 to 3 months out of the year, the blueberry harvest goes on all year at the grocery store.

Whether they are flash frozen in bags, or dried and blown to bits and served up as an added ingredient in your cereal, blueberries seem to be utterly plentiful.

In a turn of shocking news, it seems that all of those products like Target Blueberry Bagels and General Mills Total Pomegranate Blueberry cereal are not being totally honest with the consumer. As if we have never been lied to by cynical marketers, it seems that several of those blueberry-laden products are made sans blueberries. Actually, many of the products have nothing even closely resembling a blueberry in them, other than a bluish tinge (all done with the magic of mixing artificial colors, hydrogenated oils and liquid sugars). How could this have happened? Or the better question might be, didn’t we already know about this? 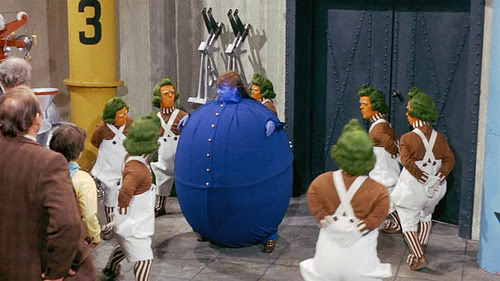 A group called Natural Food Advocates recently produced an Internet video that threatened to blow the lid off Blueberrygate, once and for all. This expose-style video goes on to point the finger at everyone from Health Valley to Betty Crocker for being blueberry imposters – selling unwitting consumers on the promise of blueberries, but instead serving up dextrose, Corn Flour, Partially Hydrogenated Soybean Oil, Sugar, Citric Acid, Artificial Flavor, and of course the obligatory Blue #1 and Red #40. As the video states, “When consumers buy blueberry cereals, muffins and mixes, they’re under the impression that they’re buying real blueberries. No ordinary consumer realizes they’re actually buying blue coloring chemicals mixed with hydrogenated oils and liquid sugars. That’s why this common industry practice of faking the blueberries is so deceptive.”


No doubt all of this trickery is because blueberries are just too damn expensive to sell in a $3.99 box of cereal or a $2 box of cake-mix, and all of those compound chemicals and dyes that make up the building blocks of the fauxberries, even though they sound complicated, are far cheaper to fabricate than real wholesome blueberries would be. So what is a wary consumer to do? Probably don’t buy anything highly processed that is even remotely suspect, touting blueberry flavor or blueberry bits. And when in doubt, turn the box over and read over the label looking for ingredients that are either too complex to understand or that are decidedly not blueberries.

I have two suggestions.

I have tried to entirely cut out high fructose corn syrup from my diet. That makes it necessary to read the ingredients of everything because it shows up in the most unexpected places. Really.

3. A third suggestion. Either eat homemade roti or invest in a bread- maker. It's easy and you know what you're eating, sort of. It's still hard to know if you're eating GMO. Curse you, Monsanto!

nice article findingmyway ji but im afraid the situation is more serious than just fake bluberries flooting around our food. A small handful of food corporations(kraft,coke,frito lay etc)literaly run the entire food industry in the north western hemesphere. Dextrose, Corn Flour, Partially Hydrogenated Soybean Oil, Sugar, Citric Acid, Artificial Flavor and SPICE; you find these ingredianats(and more) in the MAJORITY of the items sold in americas grocery stores. A very large portion of the crops we consume(US being the leader) fall under the same catogory as these blueberries, they are Geneticaly Modified Organism GMO's. Most of these GMO crops LOOK and TASTE like the original fruit but have few or none of the nutritional value.

The US and slowly the rest of the worlds crops/food suply is being slowly poisened/taken over by the monsanto corporations sinister genetic engineering . They have created patented seeds which they sell to farmers which self destruct every harvest so you are dependent on monsanto for new seeds but the worst part is that these crops spread there polen and contaminate natural crops which then are turned into fake monsanto crops. I suggest people watch " the world according to monsanto"