United Sikhs Be Counted. Answer Sikh In The 2011 Census (England And Wales)

YOU DON'T COUNT, IF YOU'RE NOT COUNTED

"Please draw attention to questions 16 and 20 of the 2011 Census in particular and assist fellow Sikhs to ensure they are counted and served by public bodies and authorities in England and Wales," requests Ravjeet Singh, UNITED SIKHS Community Advocacy Director.


London, United Kingdom – 15th March 2011- Census 2011 surveys have been delivered to households throughout England and Wales and 27 March 2011 is Census Day. UNITED SIKHS is making a community appeal to all Sikhs; answer "Sikh" to questions 16 and 20 and be counted!
In the 2001 Census the religious affiliation question recorded only 336,000 Sikhs in England and Wales, whilst the actual figure was estimated to be closer to 700,000.

Why complete the Census survey? You have a legal obligation to complete the Census survey. The information gathered from the Census is used by policy makers and service planners to forecast and respond to service needs. A report analysing the processes of the Office for National Statistics commissioned by the Sikh Federation (UK) in January 2010 explains that in practice this means that long before a nurse is treating a patient; the hospital, local authority and government department have considered the specific needs of all community members by use of accurate data relating to the population. A large part of this data is derived from question 16 of the Census "What is your ethnic group?" If you do not answer "Other" and then "Sikh" to this question your needs are unlikely to be faithfully met by the government bodies that are established to serve your everyday needs. If you are not counted in a system that functions on the basis of collated data then you are prone to receive sub-standard service and care; your needs are dealt with at best on an inefficient ad hoc basis or, as is most likely, you remain hidden and ultimately, you do not count. The report therefore concludes that "in effect Sikhs are invisible on paper to the 40,000 public bodies that design, plan or deliver public services".

Why are Sikhs an ethnic group? The concept of Sikh as an ethnic group has been widely discussed in the media and Sikh community over recent years. The House of Lords ruled, 25 years ago, that a Sikh belongs to an ethnic group, in a case called Mandla v Dowell Lee [1983] 2 AC 548, and said that an ethnic group must have one or many of the following characteristics :

It is now our role as a community to uphold this legal right.

The Sikh community has contributed a great deal to English and Welsh society, in the words of Sir Winston Churchill "British people are highly indebted and obliged to Sikhs for a long time", it is now high-time for Sikhs to unite and be counted, and reap the benefits of what they have sown throughout their existence in Great Britain.

What can you do? UNITED SIKHS solemnly appeals to you as a member of the Sikh community to reach out to your peers and educate them on the benefits of completing the Census survey accurately.

Please visit http://sikhcensus.org/ for more information about Census 2011 and what you can do to raise awareness within your community.

To read about UNITED SIKHS efforts to raise the issue of separate ethnic monitoring for Sikhs in the United States please visit http://www.unitedsik...in-census-2010/ 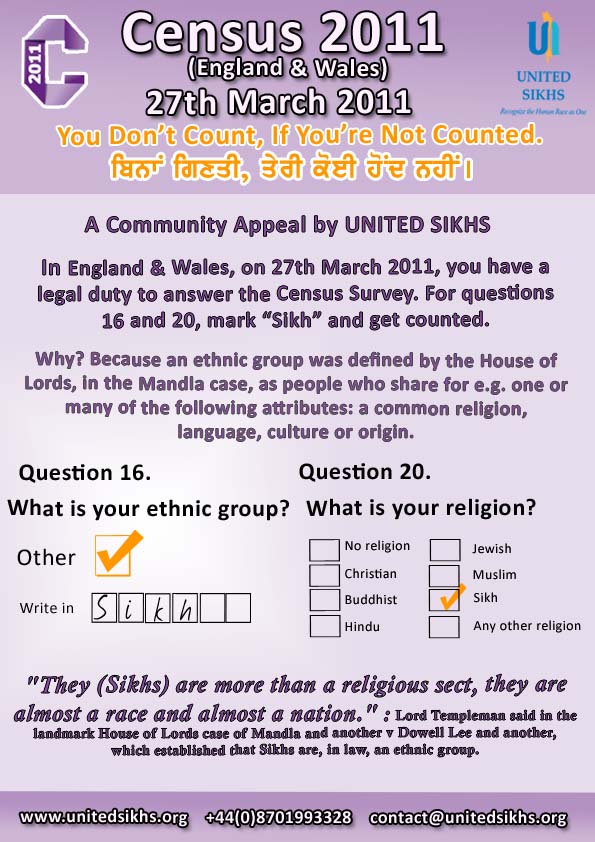 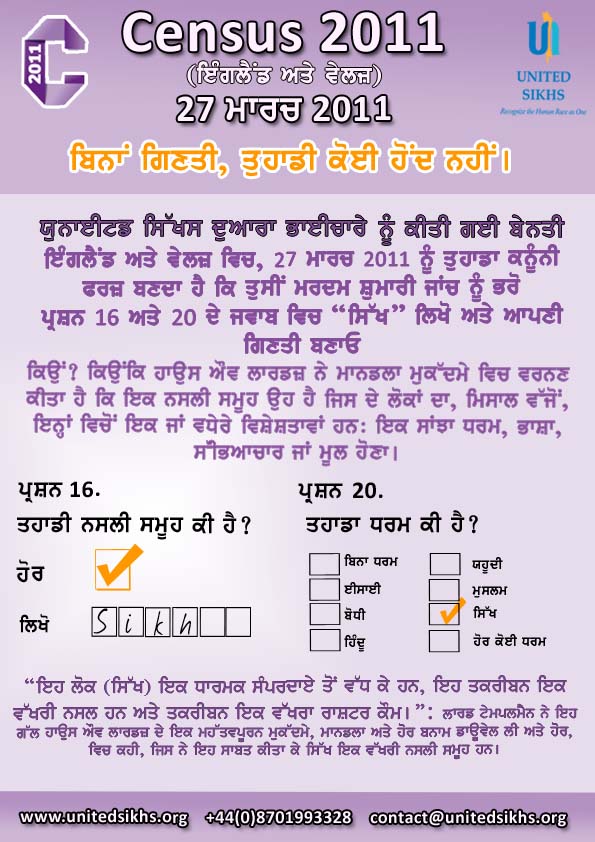