At The Battle Of Chamkaur 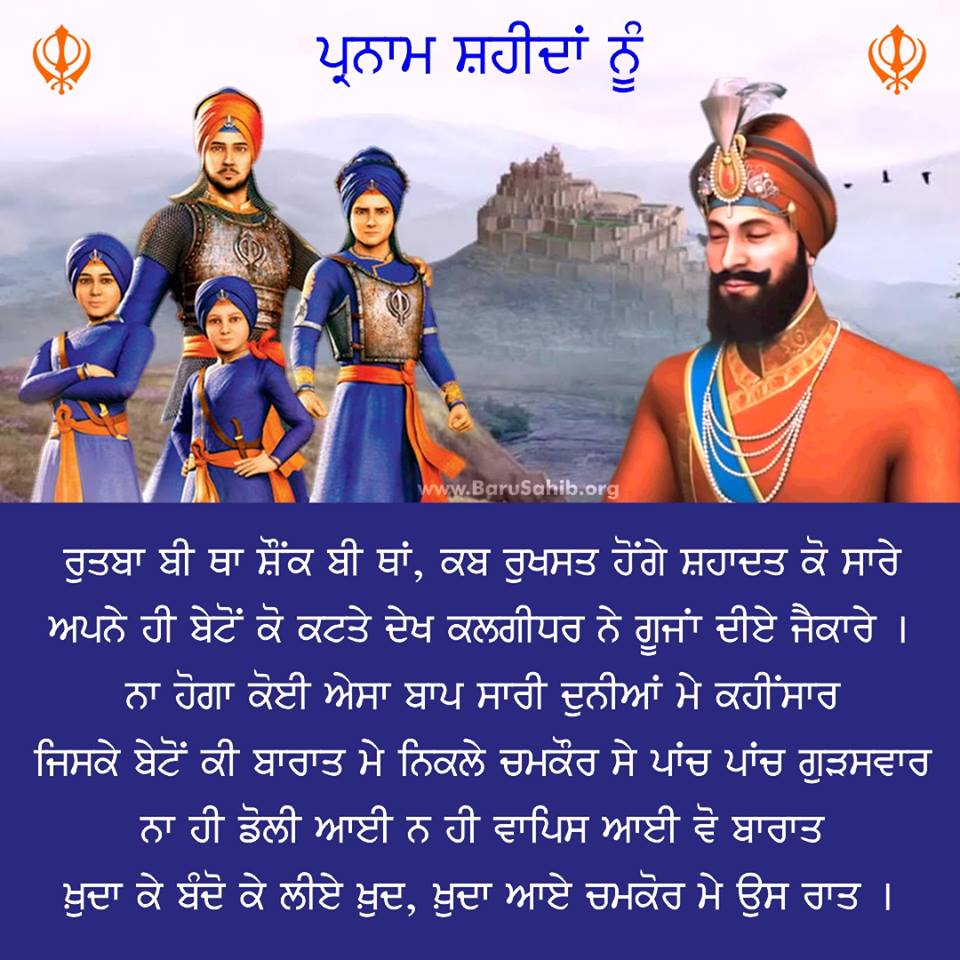 At the Battle of Chamkaur

In an article (here) IJ Singh remarks why the battles the Guru Ji fought never became as famous as SARAGARHI.Although these battles were far greater than Saragarhi, the Sikh nation is to be blamed for not making these heroic battles known to the world and shared.

The battle of Saragarhi would have gone un-noticed if not for the British.It was due to the salutations paid by Queen Victoria and her parliament, echoed the tribute to the 21 Sikh soldiers,that a record was established.Years later we are able to use this record to make Saragarhi known to the world.

If left to the Sikhs, it would have probably been not heard by Sikhs themselves today.

The battle of Saragarhi is one of heroics,of the 20th century studied by many Military Schools the world over, and acknowledge by UN as one of the greatest test of times for men fighting an enemy running in their thousands,than the 21 Sikhs at Saragarhi.

The battle of Chamkaur on the 7th of December, 1705 resembles a scene, like Saragarhi, but with greater conviction and electrifying energy of sprituality, led personally by the 10th Master of the Sikh nation, Guru Gobind Singh,the master of the blue and magnificience.

After having accepted the offer to evacuate Anandpur Sahib, Guru Gobind Singh Ji along with some of Sikhs, reached Chamkaur.A zamindar asks the Guru Ji to stay in his house, a mud built house.It was this mud house that was to be fortified, and known as chamkaur di kachi garhi, when the traitorous Mughals pursued the Guru ji, having broken their promise for peaceful passage.

The Mughals surrounded the mud house.It was the 7th of december, 1705, when the Battle of Chamkaur was fought, by few Sikhs against hundereds of thousands of Mughals.

A battle very rare, the rarest of heroism, surpassing all odds of defeat was fought heroically, to end in the comencement of the destruction of the Mughal empire in the years to come.Never had so few stood to so many before that in history of mankind in the Indian subcontinet.Never had so few faith among themselves against so many thousands facing them.Never had so few, standing in a mud fortified position, inflicted the death so many Mughals, openly and daringly.Never has so many Mughals been slain before by the few Sikhs- 40 in all, standing against the mighty Mughal army of several thousands- with a conviction in the TRUTH, honesty and ever glorious Chardhi kala - ever inspiring state of mind- against the desponded and tired out army of Mughal hordes.Never was the mud structure surrendered by these heroes of Sikh nation.At the end of the day long battle, as Five Sikhs and Guru Ji still stood tall and with such defiance, that panic set among the mughals.

After having killed several thousands , they could not total victory over the Guru, as he stood watching red eyed and magnifciently the scene of the battle field, and rassuring his dying Sikh warriors the charisma and valour of the stand for TRUTH and Freedom of the Indian people.

The battle had raged for three quarters of a day, , wherein spears and arrows and swords were used.The Guru had used military precision with such effectiveness, that his deployement of Sikhs, could repulse the enemy attack from any side.

Volleys after volley of arrows was discharged from the mud fortification, and the same hit the enemy with such accuracies, that enemy soldier after soldier fell.Yet the voley discharged by the enemy could not hit the Sikhs, who had used good cover of the hut.Many hundereds of Mughals lay dead.

When the day was about to be over,the Sikhs found their stock of ammunition and misslles along with water was depleting,a decision was made to engage the enemy in hand to hand combat.

The Sikhs then came out in twos, gave a tough fight before becomming martyrs.AS one group fell, another group of two would emerge from another direction , surprising the enemy and attacking before the enemy had time to recover from the fight.In these groups, the two older Sahibzade of Guru Gobind Singh , one 15 years old, another 19 years old also came out and fought like enraged lions,out for a kill.Which father could sent his sons to a assured death of a martyr- for the cause of the TRUTH & RIGHTEOUSNESS.

The Guru Ji made no distinction between His Sons and His Sikhs.When asked by one Sikhs, Guru JI why , why you sending these Priceless Princess, the Guru Ji smilingly replied....millions more of sons will thrive and live, dont worry.

The Guru ji displayed he had the capacity to sacrifice everything for his warrior Sikhs.He had a noble cause for the rights and freedom of the oppressed Indian people.

All noble and honest historians writing about this battle agree that every Sikhs who participated in this battle knew, there was to only ONE end at the end.They fought viciously heroically.Their spirit, valour, and steadfastness was marvellously shown, and beyond measurable heroism, as known to men.
A great feat of warfare was exhibited,they fought till the LAST BREATH, that kept them alive till then.The sons of the Gurus fought with such bravery that many of the enemy were cut to ground, before they went down more than human heroes could do.
Sainapat, writes, that Sahibzada Jhujar Singh made such a terribly lightening attack upon the enemy, with such vigrous determniation, that it became impossible for hundereds of the enemy to locate his position, as many fell to his sword.