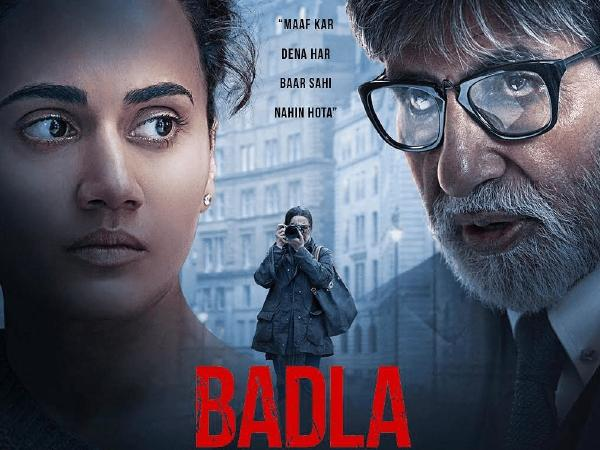 Taapsee Pannu plays Naina Sethi , a young goodlooking married businesswoman who has won the businesswoman of the year award . But she is cheating on her husband and her lover gets killed when he is with her . The police suspect her of the murder and her lawyer hires Badal Gupta who is the best in the legal profession to save her in court .

But Amitabh Bachchan acting as Badal Gupta arrives three hours too early to meet Naina for the first time , and I instantly suspected that he was not Badal Gupta at all but someone impersonating him . With this suspicion in mind it was easy to surmise that he must have been sent to find out the truth from Naina and that only meant one thing---that she was the culprit .

So was my suspicion true ? Watch the movie for that....For me the whole watching experience had the heavy overhang of thinking that Naina was spilling out the beans to the wrong man. The story as told by Naina to the character played by Amitabh is full of twists and turns and keeps you hooked to the edge of the seat .

There are no songs in this suspense thriller and background music is decent . Photography is good , especially of Britain in conditions of winter and of lakes in dense forests and snowbound hotels . Colours are decent too . Acting is good , both by Taapsee Pannu and of course by Amitabh who is redoubtable .