In an act of defiance against his bullies, a Sikh schoolboy filmed himself facing racist abuse on a school bus in Georgia. The footage has been viewed almost half a million times, and sparked a conversation about bullying in school.

In a shocking case of racism, a young Sikh boy in the US state of Georgia has been called a "terrorist" by a group of school children, with the video of the abuse now going viral on the internet.

In the video posted on Inquisitr, the bespectacled Sikh boy is seen sitting in what appears to be a school bus and is surrounded by students.

He whispers to the camera: "The kids are being racist to me." 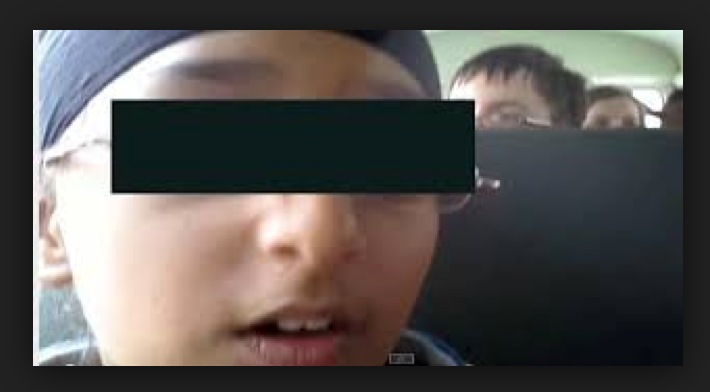 A young girl sitting behind him then shouts "terrorist! terrorist!" and points her finger at the boy, who remains calm and even shouts "who cares" when the kids hurl abuses at him.

Inquisitr reported that the video was uploaded by a user named 'Nagra Nagra' and identified the Sikh boy as Harsukh Singh.


Singh apparently uploaded the video initially which has so far got 130,000 views, with the description, "Kids being racist to me and calling me an Afghan terrorist. Please don't act like this towards people like me. If you don't know, I'm not Muslim I'm Sikh."

An online user described the video "disgusting" in which the young Sikh boy is "being bullied with racist chants on a school bus...The Sikh bravely states that he doesn't care what they think of him."

The Inquisitr reported that Singh is a student at the Chattahoochee Elementary School in Duluth, Georgia.

The incident comes weeks after a Hindu temple was vandalised in Seattle. A Nazi swastika and the phrase "get out" was found spray-painted in red on the exterior of the temple and cultural centre in Washington state in February.

According to the Council on American-Islamic Relations, FBI hate crimes statistics shows that anti-Muslim hatecrimes are still at about five times more common than they were before the 9/11 attacks.

Last year, 29-year-old Sikh man Sandeep Singh was brutally injured after a Long Island man slammed his pick-up truck into him after calling him 'Osama' and that he should "go back to your country."

Joseph Caleca was indicted by a grand jury on a nine-count indictment charging him with attempted murder as a hate crime, assault, criminal possession of a weapon and leaving the scene without reporting after hitting Singh.

Gwinnett County Schools and Duluth Middle School have taken disciplinary action after a student recorded and uploaded a video of students bullying him last week on a school bus.

#School officials did not learn about it until Monday, district spokeswoman Sloan Roach said. Roach cited privacy laws when she said she couldn’t say if any students missed school after the incident.

#“In talking to the students on the bus, school leaders were able to determine that there had been a series of back-and-forth name-calling incidents that had occurred between students,” Roach said in a statement that also said the investigation is closed.

#In the video, the boy who recorded the video, a follower of the Sikh religion, points the camera toward the back of the bus while one girl points toward him and calls him a “terrorist, terrorist.” The boy is wearing a patka, a traditional head covering worn by Sikh children.

#The original video has reportedly been taken down, but copies have been uploaded and at least one has been viewed more than 800,000 times.