When Grace Is Refused

When Grace Is Refused 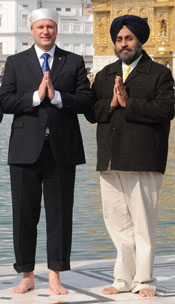 A few weeks back, while skimming through the news, I found an interesting report on Canadian Prime Minister Stephen Harper's
recent visit to the Darbar Sahib in Amritsar. Although I didn’t care much for the hoopla around his visit, I did find it interesting that he “offended” Sikhs by refusing to accept parshad or langar.

As I understand it, the preparation of parshad (grace) is unique in that it is ceremonially touched by a kirpan (kirpan bhet), which serves as an indication of the Guru’s acceptance and blessing. It is then distributed to 5 Amritdhari Sikhs representing the Guru Khalsa Panth. A Sikhs’ consumption of parshad displays a submission to the Guru. So accepting parshad is essentially “accepting His grace.” I’ve also been taught that parshad should be distributed after the hukamnama is read, as accepting parshad symbolizes acceptance of the hukamnama.

Now, whether or not Sikhs themselves understand the hukamnama, or even listen to it is another post for another day – but, if accepting parshad is accepting the Guru’s hukam, should a non-believer accept it? Although the Rehat Maryada states that parshad should be offered to everyone equally (as it should), should we be offended if someone rejects it? If a non-Sikh understands the meaning behind our practice and politely refuses it out of respect, shouldn’t we appreciate it instead?

I remember years ago at a Sikh Day Parade in Washington DC, as a handful of us were walking through the sidewalks handing out “Who are the Sikhs” pamphlets and answering questions from onlookers, an elderly BibiJi was darting through the crowd distributing parshad to random strangers. As shocked as I was to see this, it couldn’t compare to the shock on the face of those who received it. Most were not sure what to do with it, or joked about it with their friends, while others were seen throwing it away. I’m sure the BibiJi’s heart was in the right place, but what were we hoping to accomplish by this?

Unlike parshad, langar is prepared without such rituals. It is meant to be a “common kitchen” where everyone can participate regardless of beliefs. It is such a central part of our tradition to partake in langar, that I can understand why Sikh sentiments may have been hurt when Prime Minister Harper refused it. Perhaps his administration did not understand the origins behind it, or maybe his handlers in Punjab did not prepare him well enough. But if in fact he did understand the origins of langar and still refused it, then maybe Canadian Sikhs can begin a dialogue with the PM to understand why. Perhaps the Ontario-area Sikhs can invite him to the Gurdwara to “give him another chance.” Seems like a small price to pay for a politician who is clearly interested in the Sikh vote.

Harper’s visit raises another question – do local Sikh communities have a published “Gurdwara Protocol” for non-Sikhs? Does the SGPC have such a document for foreign dignitaries visiting Gurdwaras of historical significance?

When I’ve seen local politicians brought in to our own Gurwdara, they seem to be ushered in while committee members bark commands in to their ear on where they should bow and when they should stand. Often times they approach the podium not having a clue on who Sikhs are or what we’re all about.

Perhaps one of the upcoming Sikh conferences could take on this “one-pager” for non-Sikhs outlining central tenets of our faith as well as basic protocol.

Lastly, how far should we go to accommodate our guests? Essentially…how should we treat VIPs in a place where there is no such thing as a VIP? What if Prime Minister Harper preferred to wear his shoes during his visit? When does a visitor become unwelcome and how do we handle it?

As our generation takes bigger strides to open the doors of the Gurdwara to non-Sikhs, these questions will become more relevant. Perhaps we need to be more proactive and find better ways to prepare visitors so their visit to the Gurdwara can be both a pleasant and educational experience.

It is a matter of deep regret that the Canadian Supremo acted in such a disrespectful manner. Having visited Darbar Sahib despite being a non-Sikh, I felt proud of accepting "Parshaad", the grace of the divine preachers who promoted universal human fraternity, equality, religious freedom and social justice. There were many non-Sikhs like me who felt honoured by being offered "Parshaad". I question Harper's conscience. Why did he even enter the holiest Sikh Shrine if he did not have respect for Sikh traditions? And I wonder what would have he lost by accepting the Hukamnamas? He will not cease to be a Christian by respecting Sikh Gurus and Sikh Traditions. I'm an Anglo Indian by birth. By respecting and honouring the paths of righteousness shown by Sikh Gurus, Lord Rama, Lord Krishna, Prophet Mohammed and Zoraster, I will not be disrespecting Lord Jesus. The fundamental tenets of Sikhism as I understand are One God, equality of all human beings, mutual respect for each other's religious beliefs and prophets. These are noble tenets for the human society to follow. Ever live the glory of the Gurus, the champions of humanity.