Hi, I saw this in another forum posted by a Pakistani Punjabi member. I thought it would be interesting to share here. Give your views :kaurkhalsaflagred:

Today, however, things are a bit different. In just 65 or so years, we have came a long way from where we started. There is no domination of Hindus. We are free. We have our Islamic identity thriving. From merely being backward peasants, today, Muslim Punjabis dominate industries, rich lands, agriculture,rivers, and services sector of Punjab. Rather than living on the mercy of Hindu fanaticism, today we have one of the largest, and most powerful military machine, comprised of Muslims, protecting us under the nuclear-armed umbrella. I know we have still a long, long way to go. There are problems of religious fanaticism, political inability, and poverty with us...but surely, we are today at farrrrrrrrrrr better position/status than we were in 1947 or we would have been if we had not gained our independence. We have turned Punjab into an oasis of food, wealth, infrastructure, and the land of opportunity for everyone. It is still light years away from its 'actual' potential...but we are definitely working.

As West Punjab is important to you too, I'm sure Sikh brothers on the other side of the border would like to know how West Punjab is doing. So thats why I have opened this thread. I'll keep updating this thread time to time. If you have any questions, ask them freely.

Minar-e-Pakistan (The Tower of Pakistan, Lahore)

It was here, in 1940, when Muslims of North-Western Subcontinent decided that they wanted freedom and wanted to have their own Muslim state.

A typical day in streets of old Lahore

Sports Complex, Lahore. (You can see the famous Gaddafi Cricket Stadium in the picture).

Liberty Market Lahore on the eve of Islamic Festival of Eid... 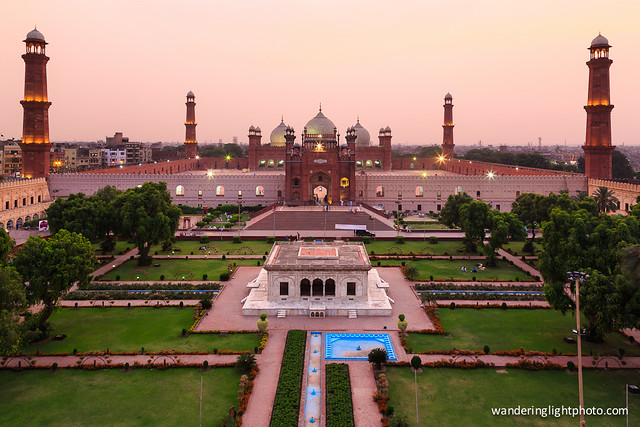 Rawalpindi : It is another sprawling Urban Center in Pakistani Punjab. It is home of ~ 3.5 million people. It also hosts the headquarters of Pakistan Military.

A suburb in Rawalpindi

Bahria Housing Scheme, Rawalpindi (Bahria construction is the largest construction company in Punjab. Housing schemes like this one can be found all over Pakistani Punjab).

A Pakistani bank, Askari Bank, on the occasion of Independence day of Pakistan.

Faislabad: It is the second largest city in Pakistani Punjab and industrial backbone of the province. With population of around 5.8 million, Faislabad leads the country in terms of textile industry, agricultural production, and garments etc.

A typical area where labors, and workers of this industrial city live.

The famous 'Ghanta Ghar' (Clock Tower). This clock tower resides in the middle of different clusters of bazars, markets, and shops etc.

They are lovely pics. I am always interested in this because of so many associates and colleagues from Pakistan. however....These pictures all have to be resized. Then they need to be uploaded as smaller attachments. The load on the server has already caused other pics on other threads to disappear because of load serving issues. I don't have time to do that right now. Do not reload as live links as they are now. What can also happen with live linking is the source could also cut the link and the pics will disappear.


Resize them and then upload them again as attachments.

Please do this sometime today because later I will need to upload jpeg files for 2 news threads.

The Sub Continent was under Muslim Rule for more than 10 CENTURIES....several Muslim Dynasties ruled for long periods until the MUGHALS took over in the 14th Century and ruled continuously for the next 300++ years and this was the mighty Mughal Empire of Famous Emperors like Akbar, Shah Jehan and Aurengzeb.

Immediately after the MUGHALS were defeated the BRITISH took over as Administrators.
A 10 century - 1000 years of Muslim Rule FAILED to enrich the POOR MUSLIM RAKYAT....This was due to 2 main reasons. The First 500 Years of Muslim Rule was by those Muslims who were outsider invaders who came to loot and go back to their won countries Turkey, Arabia, Iran, Afghanistan etc. They never regarded the land as their home. The remaining 500 years of Mughal islamic Rule was run by the Elite Royal Mughals who only enriched themsleves.

These two main reasons why the ordinary MUSLIM remained poor and had almost NOTHING. Vast majority of Muslims were day labour, or doing low income jobs like barbers, (naii) or telis (oil workers, iron smiths, etc.

Even TODAY, BOTH Govts..the one in DELHI and the One in Islamabad..actually FEAR the UNITED STRENGTH of a UNITED PUNJAB...thats why the PUNJAB is actively discriminated by BOTH. East Punjab was DIVIDED into THREE soon after 1947..and there are various movements in Paksitan to DIVIDE the Punjab into smaller states...There is an active movement going on to SAVE PUNJAB and the Language of PUNJAB PUNJABI ongoing in Pakistan today. A UNITED PUNJAB can be a THIRD FORCE in the sub continent. It doesnt matter if its a Muslim Ruled State or otherwise as long as its well governed like the Kingdom of Maharaja ranjit Singh who was the perosn responisble for taking the PUNJAB BORDER to the Afghan Borders Fort JAMRUD was defended by General hari Singh Nalwa.....otherwise LAHORE would have been in AFGHANISTAN !!

Today the BIGGEST DANGER to Pakistan is the Self created fanatics like the TALIBAN who have actually KILLED MORE Pakistanis via suicide bombs and shootings than all the wars with India...Daily at least FIVE suicide bombers take a toll of at least 60 Pakistanis- and even sacred Mosques are not spared. If the Pakistani people resolve to stand UNITED and DEFEAT these...Pakistan can be model country within five years...I am so gald that for the first time in 65 years a DEMOCRATIC GOVT finally complted five years of Govt...otherwise its the Military REVOLT after dictators take over...like clockwork...Pakistan has strayed far from the What the Founding fathers like JINNAH wanted it to be. All the BEST for a UNITED PUNJAB.:redturban:

I think for now we are OK on picture size. Admin Singh adjusted some controls so that pictures uploaded as embedded links will never be larger than 800 pixels. Which works. So you don't have to worry for now.

The only remaining problem is that when pictures are uploaded via links to an image or page, they may disappear because of the server load issues that I mentioned a few comments back.

Maybe we can CUT and Paste them on our server..so they remain forever...Pakistan is indeed a most lovely place....and Land of our GURUS as well...

Here is an article written by a Muslim Pakistani on Guru nanak jis Birthday..
Its a few posts down the page....

Auzer Ji..many thanks for this Thread...its appreciated...
Maybe our readers will also post some more pics...hopefully like myself they have Pakistani friends on face Book who post pics regularly...