Ex Dean Research Desh Bhagat University​
A highly poisonous, devoid of truth, anti Sikh article "Gurudongmar in Sikkim | Force majeure" written by Kai Friese, a correspondent of India Today appeared in India Today, New Delhi June 3, 2022 Issue Date June 13, 2022, Updated: June 6, 2022 12:28 IST. The aim of the article appears to be creating wedge between two communities and influence the court case already in progess in Sikkim High Court for which a stay has been granted by the Hon'ble High Court Sikkim to retain the status quo of Gurdwara Gurdongmar. Since the status quo has been changed even when the Gurdwara was under the protection of the state government and Sri Guru Granth Sahib and other articles have been removed and the structure has also been altered during the stay orders; the new photo has been shown on the front page of the article in India Today painting Buddhist religious symbols and flags to devoid Sikh identity. Hence the case deserves an FIR against the administrative authorities and Kai Friese, the writer of this article who has tried to create inimical feelings between the two communities and against the Chief Editor India Today who has allowed the article to be published or for his direction to write such an article since the issue was concentrated between majority and minority communities. India Todway is well known for its stand for majority and against minorities.

The writer approached me on phone to convey that all the Sikh Gurdwaras in Himalayan belt were originally Buddhist structure which have been changed into Sikh Gurdwaras and he is writing an article in detail about it. Since I was about to go abroad, I told him that, "Your claim is totally false and devoid of truth. To know the actual truth you may visit me to get the evidence of the Gurdwaras which I have plenty and will make his facts straight once I am back in India". He, however, chose to go without this evidence and produced one sided report.

To influence the case he has quoted Gangtok Advocate Jorgay Namka, a Buddhist, who fully knows that the case is in Sikkim High Court. It is most likely that the advocate is from the opposite party. Then he quotes me saying that, "in 1987 when Grewal, then a Battery Commander, sponsored the construction of a small ‘gurudwara’ on the pristine shores of the Gurudongmar lake." This is a total lie since I have told him that when I was posted in Sikkim as Lieutenant, 1970-1971, I visited Gurdwara Chungthang and was told that a small Gurdwara existed at Gurdongmar. When I was again posted to Sikkim to look after the responsibility in that area in 1987, I found the Gurdwara at Gurudongmar expanded. The photo of Gurdwara in 1987 is given here. 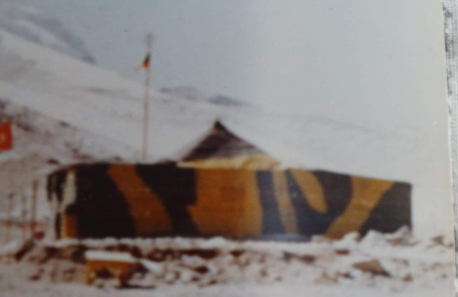 Gurdwara Gurudogmar before 1987 as visited by this author​
There was no other structure or sign of any other religion including of Buddhism at that time even with in miles of the place since the place is a glacier adjoining Kanchenjunga. There was no Sangphur or any other Buddhist structure; as claimed by the author at the instance of the advocate to prove it to be a Buddhist structure at that time. Gurdwara was further developed from 1987 to 1997 with the help of Sikh troops and the Photos of the foundation stones of officers who laid stone of the Gurdwara are given below: Gurdwara was developed to a domed one in 1992 AD. Hence to claim that there was any Buddhist structure is totally devoid of facts.

Kai Friese goes further to claim that the JCO of Assam Rifle built a Gurdwara at Chungthang against an exiting structure as against the will of the local people. This too, is also a concocted stroy since the foundation stone of the Gurdwara was laid by the local MLA of Chungthang Tasa Tangey Lepcha, who himself was a Buddhist. When I met the son of this MLA in 2015, to know the full version of the new controversy, he told that some political leaders in connivance with the then new SDM Sonam Topgay Tashi has created this controversy somewhere in 2014, to establish Tibetan Buddhist hegemony in the area. He also told me that they fully believe in Guru Nanak's visit to the place and these Tibetan Buddhists have started these stories to win over elections and to defame them.

As researched from the records of Guru Nanak's visit to Chungthang and Kanchenjunga area has been found recorded by Gyani Gian Singh in 1892 AD and later by other researcher as given in second article. There is no record of Padmasambhava, a Punjabi Buddhist saint, to this area. Only recently after the case went to the Sikkim High Court, some articles have been produced by the local researcher to prove their claim but that too are without any evidence. I had earlier discussed about Guru Nanak's visit to Sikkim and other Himalayas region with Director Institute of Tibetology, Gangtok in 1987 and the local Lamas then whose interviews have been published in my articles and books since 1988 onwards and are referred in the next article. Hence the joke made out at the instance of the advocate and 'Pipon of the Lachen Dzomsa’about 'Changa sthaan’ is also proved malafied. In none of the articles published between 1892 to 1987 there is a mention of 'Changa sthaan’ as claimed by Kai Friese, or his sources, the advocate or the other local Tibetan Buddhist at his instance.

The mention of Forest Survey of Gurudongmar in 1998 is all concoction., since there was not a single tree in that area of Sikkim Plato area, glacier, as observed by me from 1970 to 2015 my last visit. Creation of claim through Forest Department was an after thought made during the court proceedings. There is nothing truth in it. Till 1975 Sikkim was a kingdom and there is no record of any forest in Plato area where Gurdongmar exists since 1970 or before that. Hence it is pushed into article at the instance of the Buddhist advocate.

Gurdwara Gurdongmar and Chungthang has been regularly visited by Sikhs from Army and civil since 1970. There are Sikkim Government official records to show that Gurdwara existed at both these places and it being a border area, the permission to go to these places were given by the Governnment authorities. A letter from the Sikkim Government is produced here. 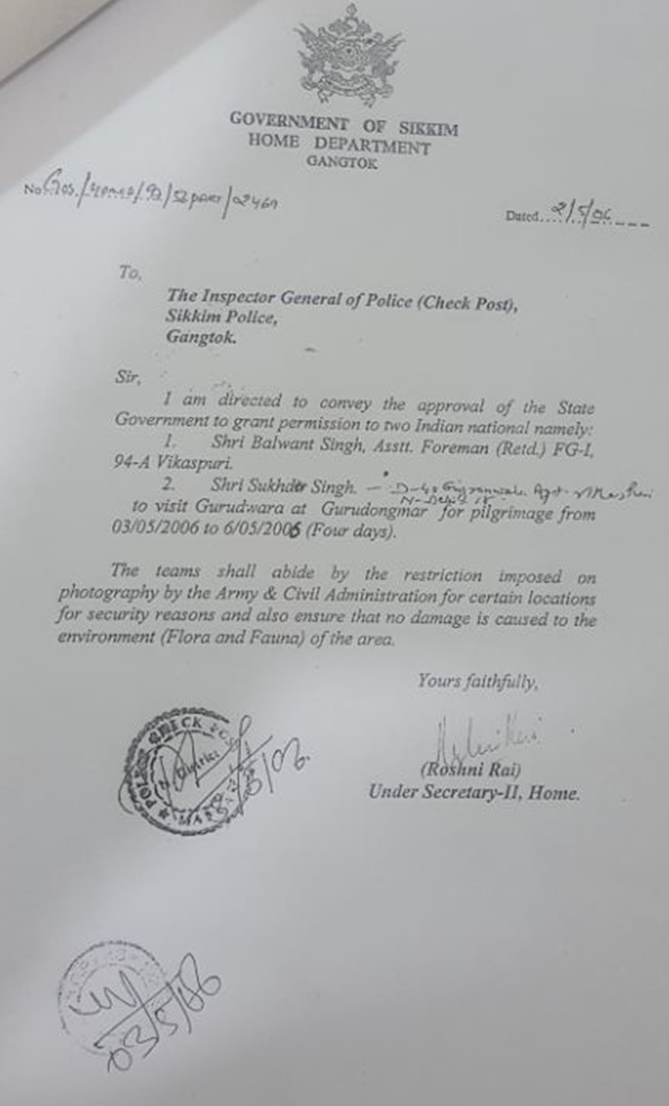 Since 2010, the Buddhist monks of Lachen, seeing heavy offerings at the Gurdwara started claiming that all the offerings in religious places in Sikkim should go to the Pippin of Lachen. Since this was against the Sikh system, it was objected. The real problems started thereafter. Some of the officers sided with the Buddhists under pressure from state government and created a claim on Gurdwara of the Buddhists which was vehemently denied. In 2015, I visited the Gurdwaras in Gurdongmar and Chungthang with a team of SGPC officials and found the Gurdwara fully functional and we prayed in the Gurdwara. A photo of the same is attached. 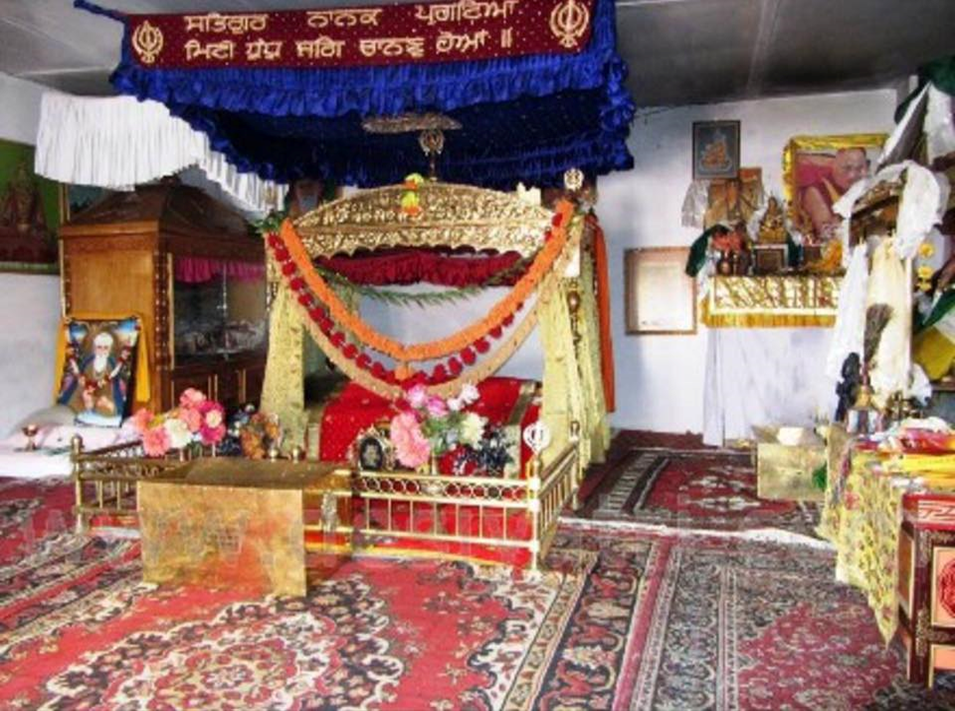 To create a sensation, Kai Friese, links this case of 'Mandir-Masjid conflict' and to make the issue of 'India Today' more fanciful. Mr Kai, possible in connivance of the Chief Editor, went with this article one-sided at the cost of creating enmity between two communities, using untruths and without going into details of the facts on ground and the history of the place.

To prove his theory that Sikhs have occupied Buddhist places in Himalayas, he expands the scope of his article to Arunachal Pradesh and Ladakh. He mentions of similar elements who are claiming the site of Menchuka Gurdwara as 'Pema Shelphu.' 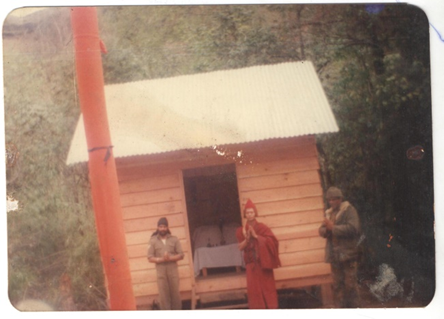 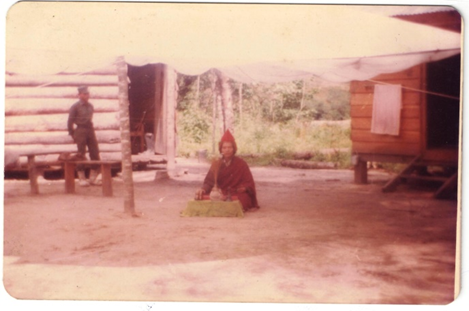 Similarly in Leh which I visited in 2021 I found no problem. These new problems are now being created by inciters like India Today and its correspeondents to help Tibetan Buddhists.

The historical records of Guru Nanak's visit to the place are given in following article to prove that these are the places where Guru Nanak has visited and the Gurdwaras had no conflict with Buddhists till 2012, when this row was created by some Tibetan Buddhists. Since these places have nearly nil Sikh population and the places are dominated by Tibetan Buddhists these claims are aggravated and adertised among the local people.

The case now being in the court, influencing the court this way is criminal and causing enmity between communities is a criminal activity hence an FIR must be filed against Kie Friese, for this malicious writing giving results and Editor in Chief India Today for being party in this malicious and poisonous article.

On the basis of his poisonous writing, peacefully living Menchuka Buddhists gathered in number this week at the Gurdwara location and started claiming the Gurdwara as a Buddhist place. It may cause problems at other locations as well if this article is not with drawn and action not taken against Kie Friese, the correspondent and also on the Editor in Chief of India Today, so that they do not spread poison further in society like this and affect a court case directly through these half truths and without any knowledge of the ground facts.

I do not think Kie Friese or any member of the team of India Today ever visited any of the places. They wrote only whatever has been dictated to them. Such a falsehood or half baked truth is very dangerous for the society. I am saying this as I have visited all these places mentioned by him and researched the history of Guru Nanak's Travels into Himalayas for fifty years Being a Dean of Research of an acknowledged university, I say with authority that India Today's article need to be immediately banned before more poison is spread. I give the researched article on Guru Nanak's visit is given next.