In a rare honour, New York City declared October 19, 2016, as Waris Ahluwalia Day in recognition of the Sikh-American actor and designer for his “powerful” message of countering ignorance and advocating religious understanding and tolerance. 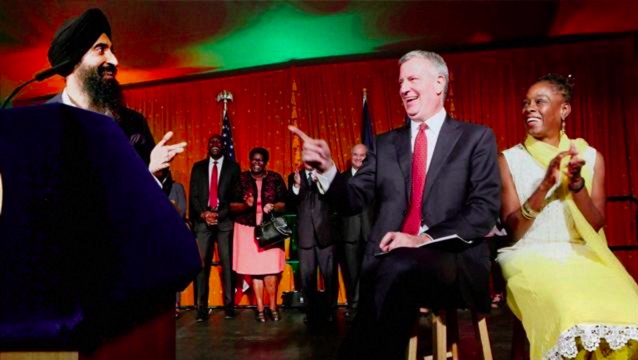 Lauding Ahluwalia’s talents of being a fashion designer, writer, actor and model, Blasio said as a Sikh, Ahluwalia “proudly wears his dastar (turban) wherever he goes and sends a powerful message to our city and country of countering ignorance, celebrating inclusion and advocating for religious understanding and tolerance in everything he does”.

Addressing a gathering of over 300-400 Indian-Americans and other people from the South Asian community, Blasio extended a special greeting to his Sikh brothers and sisters and underscored that an attack on any community and individual because of their faith was an “attack on all of us”.

Joined by his wife Chirlane McCray, Ahluwalia and others members of his administration on a stage in the sprawling lawns of the Gracie Mansion, Blasio said whenever any community is affronted, the New York police department is present to protect that community.

“Whenever there is a hate crime, we will call it a hate crime and act on it as a hate crime, protect the people and say it is unacceptable in the city of New York to act in any bias fashion against any people of the city,” he said.

Amid loud cheers and applause, the mayor said a special Diwali guide will be distributed to New York teachers through the department of education to help them educate students in the city about the “meaning” of the Indian festival of lights.

Ahluwalia thanked the mayor for the “incredible honour” and said while Diwali has been celebrated for centuries, this year its message of triumph of good over evil is “more important and relevant than ever”.

He said while he has called New York City home ever since he moved here from India as a child, after the 9/11 terror attacks, “people would glare at me with anger and hate as I walked down my own streets, in my own hometown. That was very confusing for me,” he said, adding that six months after the 9/11 attacks, he was assaulted and nearly lost vision in his right eye.